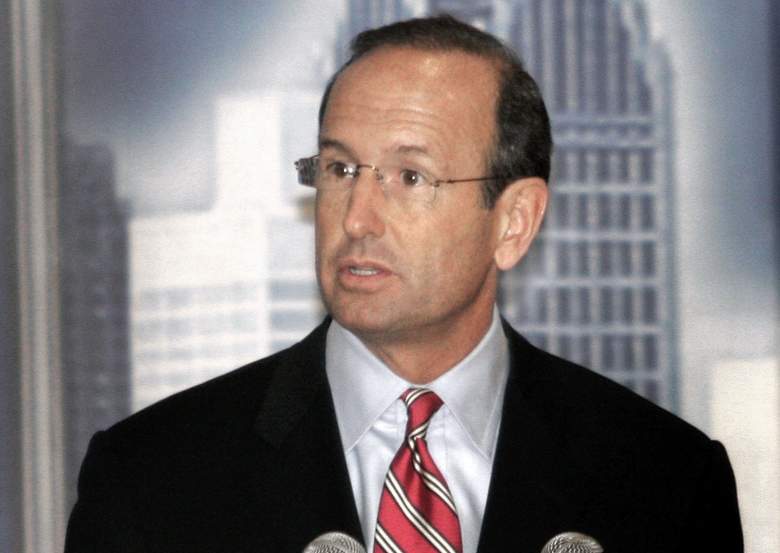 Dick DeVos at the Detroit Economic Club in 2006. (Getty)

Betsy DeVos has been confirmed as United States secretary of education.

Betsy is an education activist and philanthropist, and she comes from the wealthy and politically active DeVos family. She has been married to her husband, Dick DeVos, since the 1980s; he is a businessman who has gotten himself involved in the world politics as well.

Here’s everything you need to know about Betsy DeVos’ husband, Dick DeVos. 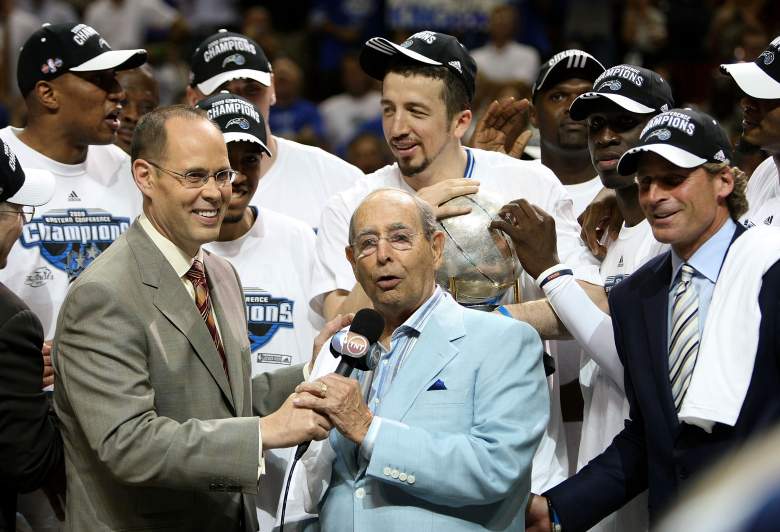 Orlando Magic owner Richard DeVos speaks on the court on May 30, 2009 in Orlando, Florida. (Getty)

Dick DeVos is the son of Richard DeVos, who Forbes lists as the 88th richest person on Earth and who has a net worth of approximately $5.1 billion.

That’s because Richard DeVos is the founder of Amway, a multi-level marketing company that generated $9.5 billion in revenue last year, according to MLive. Dick DeVos began working at his father’s company in the 1970s, becoming a vice-president of Amway in 1984.

Another source of Richard DeVos’ wealth is sports, as he purchased the Orlando Magic basketball team in 1991. Upon buying the team, Richard appointed his son, Dick, the president and CEO.

DeVos eventually became the president of Amway, serving in that position for two years before moving on to The Windquest Group, an investment management firm, according to Dick DeVos’ personal website. 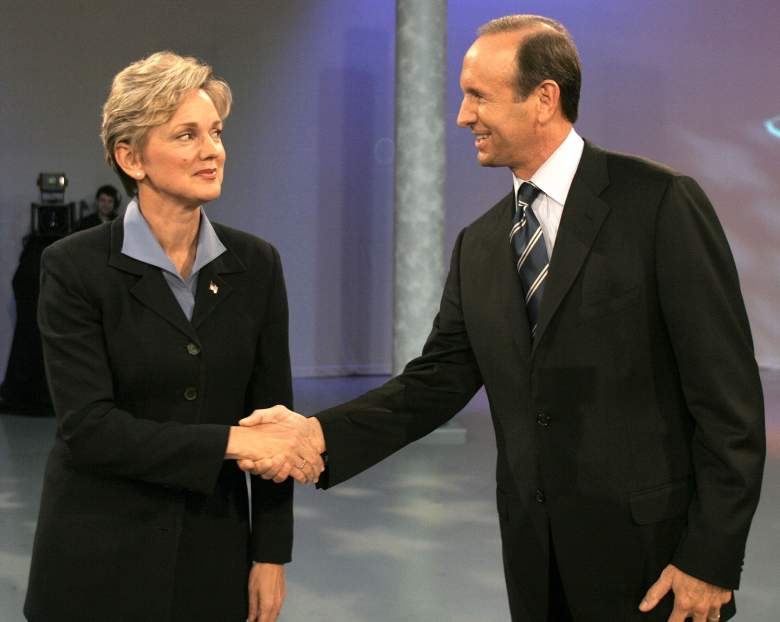 Outside of business, Dick DeVos has entered the political arena, becoming the Republican nominee for governor of Michigan during the 2006 election.

During the campaign, DeVos ran on the issue of jobs and the economy, saying he would make the state more business friendly by cutting taxes and regulations and pointing to his business experience as proof that he could get the job done. He was challenging incumbent Democratic Governor Jennifer Granholm, whose economic policies DeVos criticized. DeVos also called for an increase in funding for secondary and higher education.

DeVos’s economic message had appeal in the state; he led in the polls for some time and received some key endorsements including from the Michigan Chamber of Commerce and the Michigan Farm Bureau. In the end, though, Granholm easily defeated DeVos, winning the election by a margin of 14 percentage points, according to CNN. DeVos has not run for office since.

3. He & Betsy Have Lobbied for School Voucher Programs 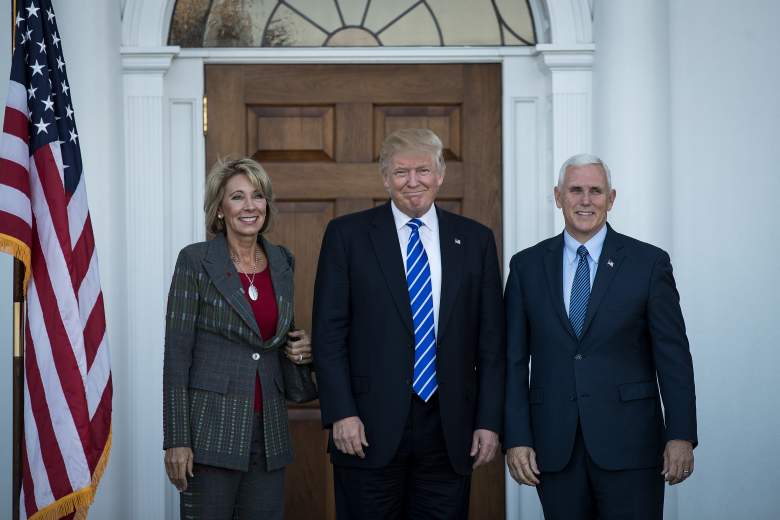 Both Dick and Betsy DeVos are private school voucher advocates, having spent millions of dollars lobbying for this issue.

In 1993, Betsy and Dick DeVos became co-chairs of the Education Freedom Fund, which gives scholarships to low income families in Michigan that can be used to attend a private school of their choice. They also served as the co-chairs of the Kids First! Yes! campaign, which backed an amendment that would allow vouchers and tax credits for K-12 schools in Michigan. This ballot-initiative lost, with 69 percent of Michiganders voting against it, according to the Mackinac Center for Public Policy.

According to The Washington Post, Betsy DeVos is the chairman of the American Federation of Children, which helps support candidates who back charter schools, and Betsy and Dick have both given money to many pro-charter school organizations.

The DeVos family says that they are working towards giving all parents the opportunity to send their child to the school of their choice. Many teachers unions decry their work and say that it is an attempt to privatize education.

Lily Eskelsen García, president of the National Education Association, told The Washington Post that the Devos’ have “consistently pushed a corporate agenda to privatize, de-professionalize and impose cookie-cutter solutions to public education.”

Outside of charter schools, one other political issue that Dick DeVos has been involved in is the issue of right-to-work laws. DeVos has strongly supported laws that say that employees can work without being compelled to join a union, something unions strongly oppose.

In 2012, DeVos helped organize a campaign to pass a right-to-work law in Michigan, spending $1.75 million to fight against the unions and with Protecting Michigan Taxpayers, a group DeVos backed, spending nearly $23 million on the campaign, according to Reuters. Michigan Governor Rick Snyder ultimately enacted legislation banning mandatory union membership, making Michigan the 24th state to do so.

“We value the freedom to associate; we need to preserve and protect the right in America to disassociate,” DeVos said in an interview with The Heritage Foundation.

When asked by Reuters about his involvement with this right-to-work effort, DeVos said that he is “pleased if I was able to help encourage legislators to truly vote their conscience without fear of political retribution from the other side, which is known for its heavy-handed tactics.”

5. He Is the President of a Charitable Foundation

Dick DeVos and his wife head a charitable foundation. (dickdevos.com)

Dick DeVos is the president of the Dick and Betsy DeVos Foundation, a charity he and his wife formed in 1989 and which has donated thousands of dollars to religious, education and artistic organizations.

The foundation’s beneficiaries have included The Potter’s House, a private school in Michigan for low-income students; the Mars Hill Bible Church, a non-denominational Christian church in Grand Rapids; and Helen DeVos Children’s Hospital, a hospital named after Dick DeVos’ mother. The charity has given money to organizations that the DeVos’ themselves are involved in, including the Education Freedom Fund, which the DeVos’ are co-chairs of and which from 2002 to 2004 was the largest beneficiary of the foundation, according to the Associated Press.

DeVos has also given money funding art competitions, scholarships, and various universities across the country.

Loading more stories
wpDiscuz
10
0
Would love your thoughts, please comment.x
()
x
| Reply
Dick DeVos is a businessman and the husband of Betsy DeVos, the new U.S. education secretary. Here's what you need to know about him.