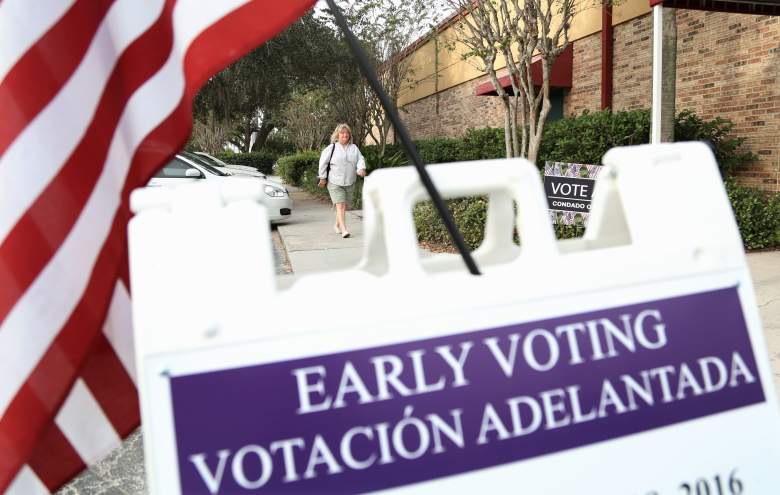 A voter arrives at an Osceola County polling station to cast her ballot during early voting in the federal election, in Kissimee, Florida on October 25, 2016. (Getty)

Over a week into early voting, about 5.6 million Floridians have already cast their ballot in the 2016 election, and Republicans currently maintain a lead over Democrats.

As of November 2nd, registered Republicans have cast about 17,500 more ballots than Democrats. Looking back to 2012, six days ahead of the election, Democrats had cast 38,000 more votes than Republicans, according to the Tampa Bay Times. In the end, Barack Obama won Florida with a margin of 0.88 percent.

Another piece of bad news for Democrats is that black turnout is down in Florida so far this year, 15 percent in 2016 compared to 25 percent in 2012, The New York Times reports.

However, Hispanic turnout is up from 9.4 percent in 2008 to 14 percent today, according to CNN. In fact, Hillary Clinton’s campaign is touting that 99 percent more Latinos have voted in Florida this year than did in 2012. To be exact, 133,000 Hispanic voters have cast their ballot early in Florida so far. Slate reports that 10 percent of early votes in 2012 were cast by Hispanics, four percentage points lower than the number is right now. And according to the Miami Herald, about 820,000 Floridians who registered to vote this year are Hispanic. Among that group, 42 percent are Democrats, 15 percent are Republicans, and 42 percent didn’t register with a party. Before 2016, 26 percent of registered Hispanic voters were Republican.

There also seems to be a big turnout among Hispanics who stayed home in 2012. According to Slate, 29 percent of Hispanics who have voted as of October 30th did not vote four years ago.

But voters who are not affiliated with either party could end up helping swing the election. According to the Florida Board of Elections, roughly three million Floridians are not registered with either the Republican or the Democratic party. This is an increase from 2012, when about 2.5 million voters did not have a party affiliation. And these nonpartisan voters seem to be much more engaged this year than they were in 2012. According to Election Smith, about 34 percent of unaffiliated voters who have cast their ballot early in 2016 did not vote at all in 2012.

It remains to be seen who these unaffiliated Floridians will vote for, but in a recent Remington Research poll, 49 percent of those without a party affiliation said they were going to vote for Donald Trump compared to 36 who selected Hillary Clinton. In the latest New York Times/Sienna poll, among voters who either identified as Independent or “other,” 45 percent chose Donald Trump and 33 percent chose Hillary Clinton.

Turnout is also way up this year in several deep-red areas of Florida, including Collier County and Lee County, suggesting a base of Republicans much more enthusiastic about getting to the polls than they were four years ago.

So we know that more registered Republicans have voted early than registered Democrats, but we don’t actually know for whom they voted. Could some of them be crossing parties and supporting Hillary Clinton? That’s what a new survey from Target Smart and William & Mary College found. In this poll, 28 percent of early Republican voters said they voted for Hillary Clinton. It’s extremely unlikely that Clinton will wind up winning this large a share of the GOP, but the poll still suggests we may see more crossover this year than in prior elections.

Other recent polls of Floridians who have already voted also give Clinton an impressive lead overall. In a recent poll from NBC/The Wall Street Journal, 54 percent of early voters said they voted for Clinton, compared to 37 percent who said they backed Trump. However, both of these polls showed Trump in the lead among Floridians who have not yet voted.

To summarize, then, these early numbers are bad news for Democrats in that black turnout is down and there are significantly fewer ballots being cast by registered Democrats than at this point in 2012. However, what could make up for that is a large Hispanic turnout and the potential of Republicans crossing party lines to vote for Clinton. For Trump, a bad piece of news is that the percentage of new registered Republicans isn’t quite as high as he would have liked. But the good news is that registered Republicans are in the lead overall, and unaffiliated voters, who recent polls show seem to prefer Trump, are turning out in droves. It’s going to be a tight race here, and so Hispanics, Clinton Republicans or unaffiliated voters could end up making all the difference.

Loading more stories
wpDiscuz
2
0
Would love your thoughts, please comment.x
()
x
| Reply
About five million Floridians have cast their ballot in the 2016 election, and the numbers are looking much better for Donald Trump than Hillary Clinton.