The action can’t be overturned by Congress, although the tribe is planning legal action, and camp leaders called for “mass civil disobedience” in response. Trump’s orders are sparking intense reaction on social media. Al-Jazeera and AP reported that Trump also used executive order to advance the Keystone XL pipeline. 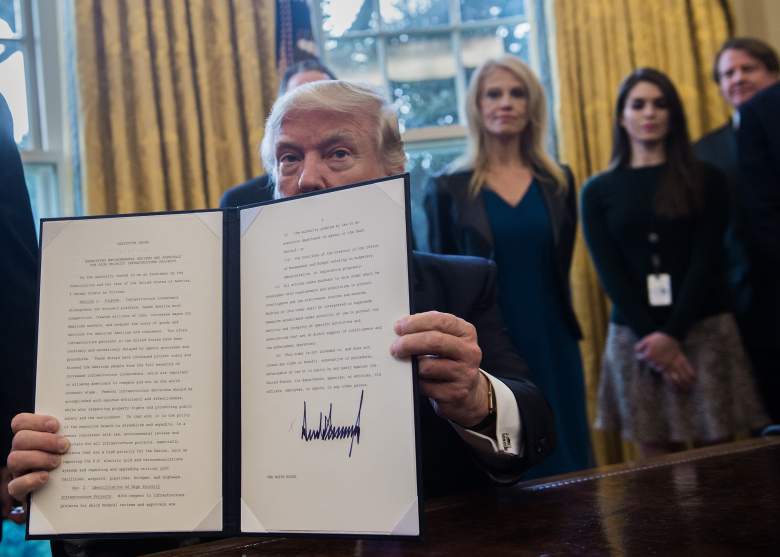 Trump signed executive orders January 24, 2017 reviving the construction of two controversial oil pipelines, but said the projects would be subject to renegotiation. (Getty)

The new Trump administration was not expected to be favorable to the No DAPL movement because of his business background, his choice of Rick Perry as energy secretary, and his previous investments in the company creating the Dakota Access Pipeline. The Obama administration had made some moves regarded as partial victories by pipeline opponents, who call themselves Water Protectors.

A lawyer for the Standing Rock tribe said Trump’s DAPL order was done “hastily and irresponsibly.” The Sierra Club’s executive director told The New York Times: “Donald Trump has been in office for four days and he’s already proving to be the dangerous threat to our climate we feared he would be.”

1. The Executive Orders Allow Both Pipelines to Go Forward

Boys enjoy a later afternoon horseback ride at an encampment where hundreds of people had gathered to join the Standing Rock Sioux Tribe’s protest against the construction of the Dakota Access Pipe (DAPL), near Cannon Ball, North Dakota, on September 3, 2016. (Getty)

According to NBC News, the executive orders the new president signed “will make it easier for TransCanada to construct the Keystone XL pipeline and for Energy Transfer Partners to build the final uncompleted portion of the Dakota Access Pipeline.”

Reuters reported that Trump’s actions will “accelerate” both pipeline projects. On DAPL, Trump said, according to Reuters, that the pipeline “will be subject to terms and conditions negotiated by us” and would put steelworkers back to work. He was adamant that pipelines should be built in the United States, reported Reuters.

“We’ll see if we can get that pipeline built,” Trump said as he signed the order, according to the Daily Beast.

Trump indicated that both pipelines could be renegotiated; “Another action signed Tuesday calls for U.S. steel to be used if the pipelines are built,” reported The Huffington Post. 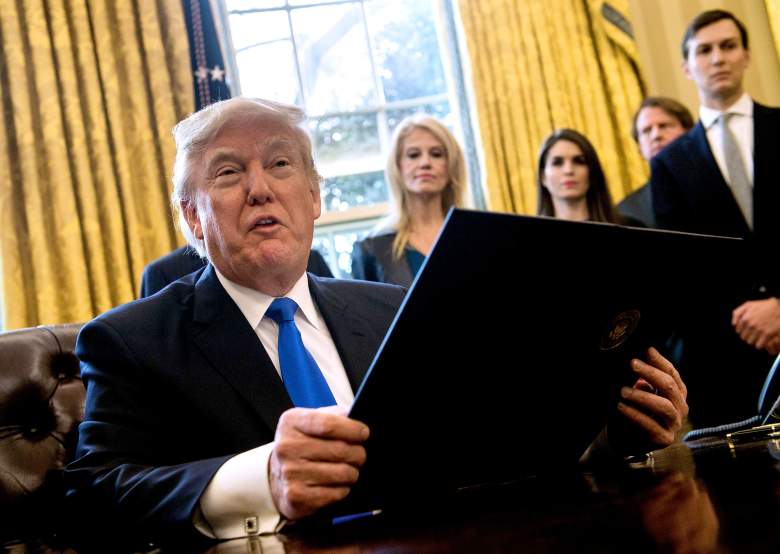 On January 23, reported Reuters, Trump “met with leaders of labor unions, including the Building and Construction trades group and the Laborers International Union of North America, who have been vocal supporters of both pipeline projects.”

Trump has also signed executive orders to limit provisions of Obamacare and ban international groups that perform or lobby on abortion from getting federal funding.

Executive orders allow presidents to bypass Congress; they have the force of law. Of any president, FDR signed by far the most executive orders. One of those required the internment of Japanese-Americans during World War II.

Dakota Access Pipeline Maps & Routes: Where Would It Go?

2. Trump Had Investments in the Company Creating the Pipeline 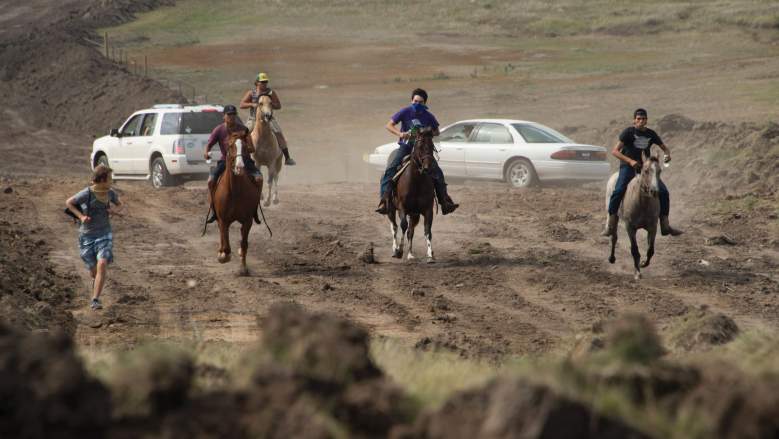 Protestors ride back to the public road at the end of their demonstration against work being done for the Dakota Access Pipeline (DAPL) oil pipeline, near Cannonball, North Dakota, September 3, 2016. (Getty)

Donald Trump, as a businessman, had investments in Energy Transfer Partners, the Texas company building the pipeline.

According to CNBC, in December, he sold his entire stake in the company as ownership in it could be perceived as a conflict of interest.

In another bad sign for the pipeline’s opponents, Trump chose former Texas Governor Rick Perry as his energy secretary. Perry sat on the board of Energy Transfer Partners.

According to Reuters, the Standing Rock Sioux tribe will take legal action against the executive order. Before Trump’s action, the tribe had passed a resolution calling for a cessation of the protest camps, saying they were straining the tribe’s resources and the tribe wanted to use the legal system to advance its cause.

In a statement, the tribe accused Trump of disregarding treaty rights and violating the law through his executive order on DAPL.

Time to get it into gear. Please read #StandingRock's statement on Trump's reckless & vindictive decision to poison the water of 17 mil ppl. pic.twitter.com/QQUwo8BceZ

CNBC reported that Congress can not overturn an executive order, and the U.S. Supreme Court has upheld all but two in U.S. history.

Protest camp leaders released a statement calling for mass civil disobedience, saying, “the heart of Standing Rock beats everywhere.” They also called on people to divest from any banks helping fund the pipeline.

In a Monday January 23 press conference, Trump’s spokesman, Sean Spicer, had strongly hinted that an executive order on DAPL was looming.

“I’m not going to get in front of the President’s executive actions,” said Spicer. “But I will tell you that areas like the Dakota and Keystone pipeline are areas that we can increase jobs, increase economic growth, and tap into America’s energy supply. That’s something that he’s been very clear about.”

Spicer brought up the pipeline controversy on January 24, framing Trump’s actions as being about job creation.

A demonstrator holds a sign during a protest outside of the Hotel Monaco in Washington, DC on January 19, 2017. (Getty)

Major Donald Trump protests erupted in Washington D.C. before, during, and after Trump’s inauguration. Among the protesters were many people carrying signs protesting the Dakota Access Pipeline. 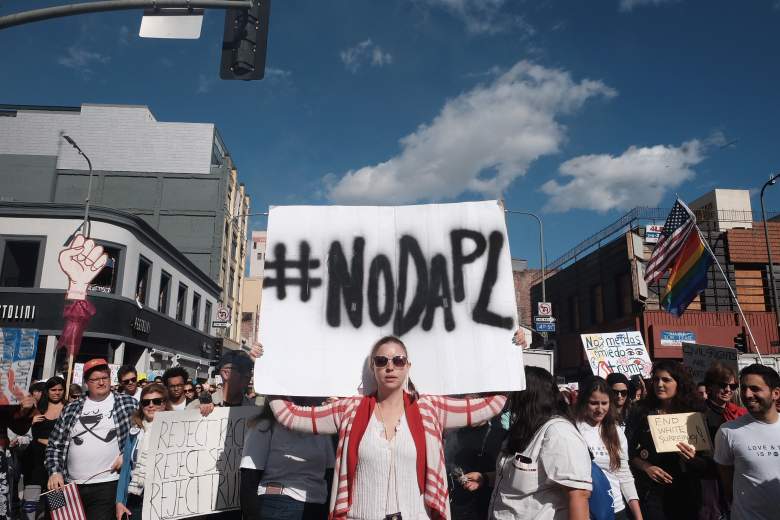 DAPL protest signs also showed up at many of the women’s marches held the day after Trump’s inauguration.

Guess all the veterans need to go back to #standingrock since it is the only way people will care. #DAPL #NoDAPL

Or the environment or women's rights or human rights. You disgust me. it's all about you. @realDonaldTrump #DAPL

@POTUS how much $ do you have invested in #DAPL?? SHOW US YOUR TAXES!!

#DAPL protestors will not lie down for Trump. We're about to see how a fascist deals with people who resist him. This could get very ugly.

The months of protests at Standing Rock have provoked dramatic scenes, including pictures of security guards for the oil company using snarling dogs against Water Protectors.

5. President Obama Had Tried to Halt Both Projects to Differing Degrees

The Keystone company would need to reapply.

As for DAPL, the U.S. Army Corps of Engineers had, in December, declined to “grant the final permit needed for the Dakota Access Pipeline to be completed. Instead, officials said, an environmental impact review will be conducted,” reported Alternet.

The Keystone pipeline would “run from Canada to U.S. refineries in the Gulf Coast. The U.S. government needed to approve the pipeline because it crossed the border,” reported the Chicago Tribune.

DAPL would run from North Dakota through South Dakota and Iowa to Illinois.