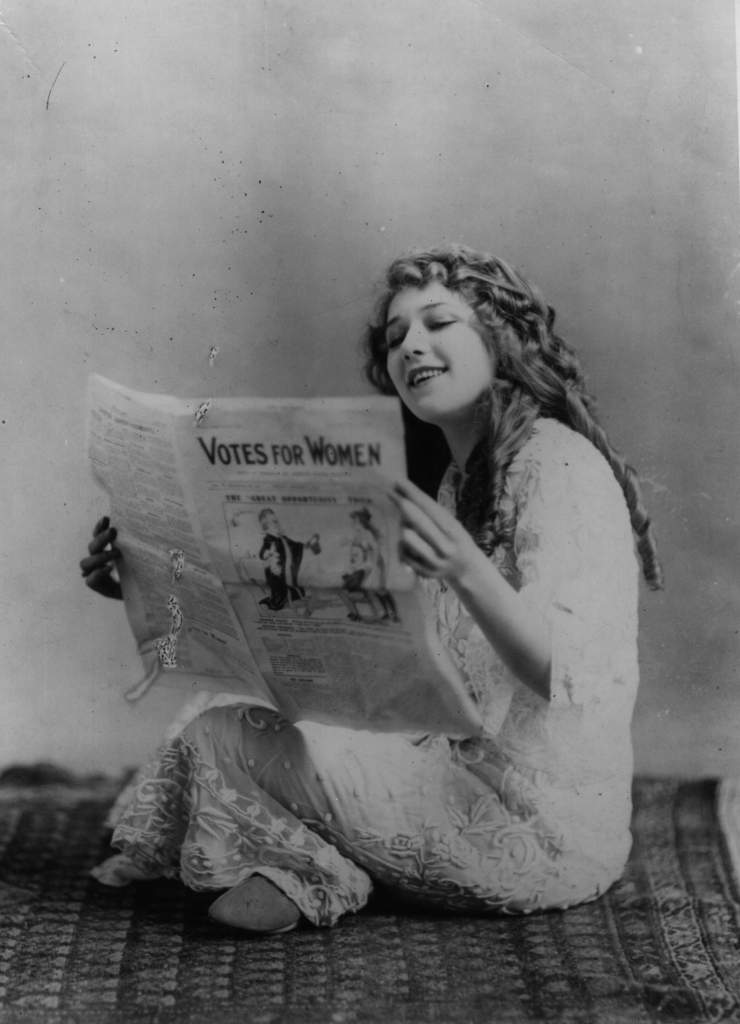 Mary Pickford, “the girl with the curls,” circa 1920. (Hulton Archive/Getty)

Long before she was honored with a Google Doodle, Mary Pickford was arguably the most famous performer from the early days of Hollywood – she was not the first movie actress, but it could be said that she was the first movie star.

The woman known during the silent-movie era as “America’s sweetheart” (and “the girl with the curls”) was born in Toronto, Canada, on April 8, 1892. Here’s five things you need to know about Mary Pickford:

1. She Started Performing as a Young Child

Pickford’s birth name was Gladys Louise Smith (according to the Mary Pickford Foundation, though other sources, including Encyclopedia Britannica and Biography.com, list her middle name as Mary). The confusion over her original middle name presumably stems from an incident when she was about four or five years old – she became gravely ill with diphtheria, which could have been fatal in the days before antibiotics, and a Catholic priest baptized her and changed her middle name to Marie.

In January 1900, she gave her first on-stage performance at a Toronto theater, under the name “Baby Gladys.” The following year, she and her family started touring Canada and the United States performing in plays.

By 1907, she adopted the stage name Mary Pickford – a combination of her middle name and a last name from her family tree. In December of that year, she started performing on Broadway, in a play called The Warrens of Virginia. The play closed in 1909, at which point her sister Charlotte (later known as Lottie Pickford) suggested Mary try finding work in the then-new field of moving pictures.

Her first film role was in a Biograph Company short called Her First Biscuits, directed by the legendary director D. W. Griffith, and shortly thereafter she signed a contract with Biograph for $10 per day (about $250 in today’s money). Most movies in those days were very short, and she made over 40 films in 1909 alone.

D.W. Griffith moved his film-making operation to Hollywood the following year, and Pickford followed him.

2. She Was Among the First Film Actors to be Known by Name 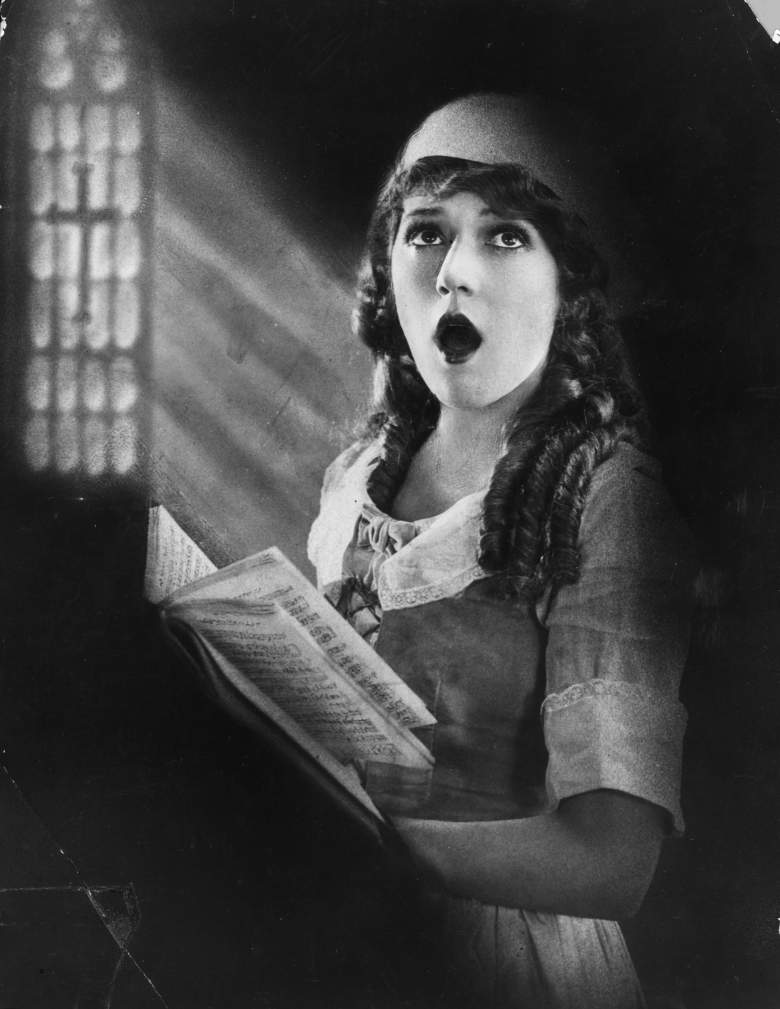 Mary Pickford sings a festive greeting on the front of a Christmas card, circa 1920. (Getty)

Movies today always list the names of the actors, even those playing small bit parts, but that wasn’t the case in the early days of silent short films—even actors playing the lead roles were often not identified. So the earliest fans of Pickford’s performances didn’t know her name; she was simply known as “the Biograph girl” or “the girl with the curls.”

The Mary Pickford Foundation goes so far as to say that “fan magazines were created because of stars like Mary Pickford.” Indeed, the very first issue of legendary movie magazine Photoplay, published in 1912, included a photo of Pickford in costume for Little Red Riding Hood.

Before Pickford’s name became known, movie theaters hoping to entice her fans into buying tickets would post signs at the box office letting people know that their latest film offering starred “the girl with the curls,” “the Biograph girl” or “Blondilocks.” But by 1914, Pickford’s name was not only known, but received top billing on theater marquees.

3. She Risked Her Career by Getting A Divorce

On the day Pickford started working for the Biograph Company in 1909, she also met the man who would become her first husband, fellow Biograph actor Owen Moore.

Pickford’s family neither liked nor trusted Moore – he was reputedly a drinker and a womanizer, in addition to being seven years older than the then-16-year-old Mary. But Pickford was thoroughly smitten with the handsome man. On January 7, 1911, she secretly married Moore in Jersey City – with Pickford wearing high-heeled shoes and a long dress borrowed from the movie studio’s wardrobe department.

The marriage soon went sour; Moore proved to be an alcoholic with a bad temper. It was around this time that Pickford met and fell in love with actor Douglas Fairbanks. But he was also married, and in those days, divorce was not as socially acceptable as it is today—Fairbanks and Pickford both feared their careers would be ruined if they divorced their current spouses and married each other.

But Pickford decided to take the risk – as the Mary Pickford Foundation put it, she decided that instead of being “America’s sweetheart, I want to be one man’s sweetheart.”

Though studio bosses feared American movie fans would turn their backs on divorcees, this pessimistic prediction proved wrong – movie fans welcomed the marriage of two of the most popular actors of their day.

The two of them moved into a lavish Hollywood mansion they named “Pickfair.” The marriage was a happy one for over a decade, until Fairbanks became smitten with a British socialite. Pickford and Fairbanks divorced in 1936, and the following year she married her third husband, Charles “Buddy” Rogers, a marriage which lasted until Pickford’s death in 1979.

By the end of the 1910s, Pickford, Douglas Fairbanks, Charlie Chaplin and D. W. Griffith were all extremely successful in the still-growing film industry – the first three as performers and the fourth as a director.

But all wanted more financial and artistic control than they had working for their respective movie studios, so in February 1919, the four of them formed their own film studio, which they named United Artists. In addition to producing its own movies, United Artists also distributed films made by independent producers.

Other movie studio heads initially scoffed at the idea that “artists” could also handle the business and production side of the trade – Richard Rowland, the president of Metro Pictures, responded to the news by saying “The lunatics have taken charge of the asylum.”

For the first few years of United Artists’ existence, it seemed the pessimists would be right – the company initially struggled financially, and some years had only a handful of films to distribute. But it started making reliable profits by the late 1920s, and by the mid-1930s UA reported profits of over a million dollars per year (almost $18 million in today’s money) – this, despite the economy still struggling in the depths of the Great Depression.

5. She was the Second Person to Win a Best Actress Oscar

In 1927, Pickford was one of the co-founders of the Academy of Motion Picture Arts and Sciences, which decided to start giving out “Academy Awards of Merit” the following year. (The slang name “Oscar” didn’t come about until the mid-1930s, supposedly after Academy librarian Margaret Herrick said the statuette looked like her Uncle Oscar.)

Whatever the little gold statues were called, Pickford, like most actors, hoped to one day win one. But like many stars of the silent-film era, Pickford found the transition to “talkies” difficult. Even so, her performance in the first sound movie she made – 1929’s Coquette – was good enough that she won the Best Actress Academy Award that year – only the second person ever to win one. She also received an honorary Oscar in 1976 for her overall contribution to the film industry.

Still, Pickford never truly felt at home in sound films. Her 1933 movie Secrets was the last one she ever acted in, though she remained busy as a film producer for several years.

Loading more stories
wpDiscuz
3
0
Would love your thoughts, please comment.x
()
x
| Reply
Mary Pickford, also known as "America's sweetheart" and "the girl with the curls," was one of the first stars of the movie industry. Read about her life and watch some of her silent movies here.