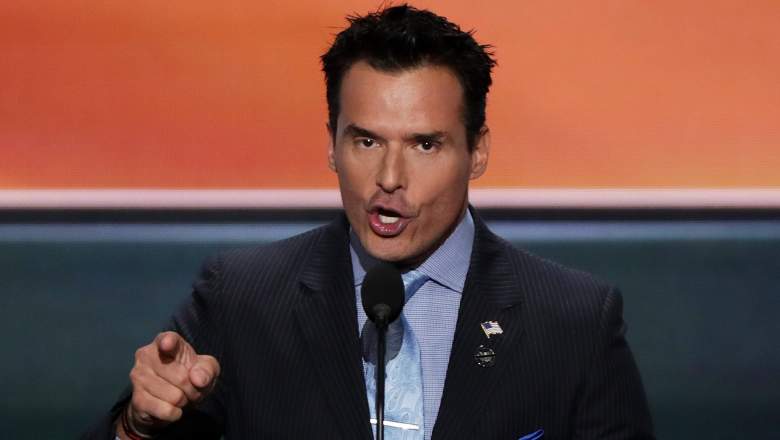 Actor Antonio Sabato Jr., best known for his role in the soap opera General Hospital, is running for Congress.

Sabato has technically not yet publicly announced this, but The Los Angles Times reported on Monday that Sabato has filed paperwork with the Federal Election Commission. A GOP strategist later confirmed the run to the LA Times.

Sabato is running as a Republican, and he’ll be challenging incumbent Democratic Representative Julia Brownley. So what are Antonio Sabato Jr.’s political positions? What might his platform be? Here’s what you need to know about what Antonio Sabato Jr. has said about politics.

1. He Supported Donald Trump for President

Antonio Sabato Jr. was a vocal Donald Trump supporter during the 2016 election. He spoke in support of Trump at the 2016 Republican National Convention.

“Donald Trump is for unity,” Sabato said during his Republican National Convention speech. “Donald Trump believes in one America, with liberty and justice for all. Having secure borders, protecting our citizens, none of this is hateful. This is the responsibility of the government. That’s right. And it’s the right thing to do.”

“His honesty is refreshing, especially in politics,” Sabato said. “He’s got the strength to put this country back together, economically, militarily and on the border. I agree with a lot of things he’s saying.”

Before the Republican National Convention, Sabato formally endorsed Trump for president in April 2016.

2. He Immigrated to the United States From Italy & Supports Donald Trump’s Immigration Policies

When he expressed his support for Donald Trump, Antonio Sabato Jr. talked about the fact that he is an immigrant himself; he immigrated to the United States from Italy with his parents when he was a teenager.

“I followed all the rules, and finally became a naturalized citizen in 1996,” he said at the Republican National Convention. “Others who want to come to the U.S. to live and work should follow the same rules. We are a nation of laws for a reason. There should be no shortcuts for those who don’t want to pay or wait.”

Sabato later said in an interview with Variety, that plenty of minorities will be voting for Donald Trump in the fall.

“I’m an immigrant, and I’m voting for him,” he said. “It’s a matter of really going out there and talking to people. All my African-American friends that I know are going to vote for him. This country needs help.”

In interviews, Sabato has brushed aside the idea that some of Donald Trump’s rhetoric has offended immigrants, with Sabato saying that this is just the media taking things out of context.

3. He Has Said That President Obama Was a Disgrace Who Should Be Sent to Guantanamo Bay

Antonio Sabato Jr. didn’t speak too much about politics until the 2016 election, but last year, he had quite a bit to say about President Barack Obama.

On Twitter, Sabato Jr. said that President Obama has no guts, that he has destroyed the country through executive orders, and that he should be arrested and sent to Guantanamo Bay.

State of affairs Obama weak & on side of Islamic terrorist , Clinton takes money from terrorist ? #time #to #wake & smell the ?

This guy is been only destroying this county #obama , don't worry the best is yet to come , you wanted change ? We sure got it ??

We lost our country , we can give our thanks to this guy Obama . Now let's get it back #maga @realDonaldTrump

In an interview with Variety, Sabato said that he supported every president until Barack Obama.

“This president has been a disgrace,” he said. “I hate to say that, I supported every president since I moved to this country. I love everything about this country. But I’ve seen enough of President Obama. I think he needs to go.”

In his Republican National Convention speech, Sabato said that Barack Obama is leading America towards socialism.

“I know what socialism looks like,” he said. “I don’t want that for my children. Not at all. But that’s the path we’re headed down with the leader we’ve had and the candidate he endorses.”

4. He Has Falsely Said That President Obama is Muslim

Like President Donald Trump himself, Antonio Sabato Jr. believes in the conspiracy theory that President Barack Obama is secretly Muslim, something there is zero evidence to support.

When Sabato was asked why he doesn’t like Obama, this was the very first thing he said, suggesting that he would not support any presidential candidate who is not a Christian. Sabato went on to ask, “Obama…that’s not a Christian name, is it?”

When the interviewer pointed out that President Obama regularly attends a Christian church with his family, Sabato said, “No, he does not. He does not attend church.”

When pressed on this and asked to provide some specific evidence to support his claim, Sabato said, “It’s in my heart. I see it for what it is.”

Sabato also suggested in this interview that “the Bible is completely out of the schools” and that this is the fault of Barack Obama. Finally, Sabato said that Obama is on the side of the Middle East and not of America.

5. He Says He Was a Democrat Eight Years Ago

Antonio Sabato Jr. is now running as a member of the Republican party.

However, Sabato told ABC News in July 2016 that he was a Democrat up until 2008. He implied that it was Barack Obama’s candidacy that caused him to stop being a Democrat, as he said he did not vote for Obama in 2008 and stopped calling himself a Democrat after that time.

Sabato said in an interview with Variety that at least part of the reason he was supporting Donald Trump was because he couldn’t possibly vote for a Democrat.

“There are many reasons [to support Donald Trump for president],” he said. “One of them is you can’t vote for the other party. The Democratic Party has been demolished in the last 7.5 years.”