Senator John McCain has been diagnosed with brain cancer. Specifically, he has a glioblastoma, also referred to as GBM. This type of cancer is usually found in the cerebral hemisphere (the part that controls muscle functions) of the brain. According to the American Brain Tumor Association, symptoms of GBM can include headache, nausea, vomiting, and drowsiness. Other more serious, noticeable symptoms can include weakness, speech difficulties, and memory issues.

“Glioblastomas are usually highly malignant—a large number of tumor cells are reproducing at any given time, and they are nourished by an ample blood supply. Dead cells may also be seen, especially toward the center of the tumor. Because these tumors come from normal brain cells, it is easy for them to invade and live within normal brain tissue. However, glioblastoma rarely spreads elsewhere in the body.”

As far as treatment is concerned, there are various ways in which doctors may suggest going about attacking the cancer cells. For John McCain, his treatment path has not been outlined completely (publicly, anyway), but a statement from the Mayo Clinic Hospital said that he may have to undergo chemotherapy and radiation.

Even with treatment, glioblastoma is considered very aggressive. The best case scenario would involve McCain outliving the typical prognosis that comes with this type of brain cancer. According to the American Brain Tumor Association, the median survival rate is listed as two to three years. For more aggressive cancers, the life expectancy can be as short as 14 months. The site also reported that about 10 percent of patients “live five years or longer.”

Last week, McCain underwent a “minimally invasive craniotomy with an eyebrow incision” to remove a blood clot, according to the statement released a short while ago. He is at home and said to be resting comfortably.

Doctors discovered the clot during a routine exam, according to CNN. 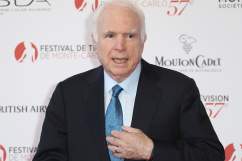 Loading more stories
wpDiscuz
3
0
Would love your thoughts, please comment.x
()
x
| Reply
John McCain has been diagnosed with a glioblastoma. This cancer is found in the cerebral hemisphere and has a life expectancy of 14 months to 5 years.