The family of a Houston real estate agent say she vanished just before Hurricane Harvey hit the area. Amid the horror unfolding in Texas as the rain continues to fall, the family of Crystal McDowell, 38, are still searching for her. In an appearance on NBC’s Dateline, McDowell’s uncle, Jeff, said that he wanted the public to know that his niece vanished before Harvey struck. The search has been difficult with public services stretched as they try to save people from the hurricane.

McDowell is a mother of two and lives in Baytown, around 30 miles east of Houston. Anybody with any information about McDowell’s whereabouts is asked to call Chambers County Police Department on 409-267-2500. McDowell is 5-foot-4-inches tall and weighs 120 pounds with blonde hair. Her uncle says, “We just want her home and her to be safe. We just really need help finding her.” A $10,000 reward is being offered for information.

1. McDowell Was Last Heard From on August 25

In his interview with Dateline, McDowell’s uncle, Jeff Walters, said, “This happened before the storm, which we think is really important for people to know. And now with all the flodding and everything down here, we feel even more helpless.” He added that McDowell was last seen on August 25. That contact was in a message to Walters.

She had canceled a different appointment that morning because that closing couldn’t happen till the next week, but we aren’t sure if she made the other two appointments that day (August 25). We haven’t been able to see the files on her computer, so we don’t know who she was going to be with.

Walters has said that McDowell is usually active on social media and would not have gone this long without contacting family members. Especially given Hurricane Harvey.

2. Although Steve McDowell Has Been Referred to as Her ‘Ex-Husband’; His Social Media Shows a Couple Very Much in Love

The Dateline report referred to McDowell’s husband as her ex-husband. On Steve McDowell’s Facebook page, he appears to still be together with his wife. His About section says the couple was married on April 14, 2007, and makes no mention of divorce. The couple has two young children together, a son and a daughter.

Jeff Walters told Dateline that McDowell had been living with her “ex-husband” in Baytown, Texas, while renovations were being done on her home. Walters said, “He said she had sent him a message saying she was coming to pick up the kids to go to Dallas, but she didn’t show. We aren’t sure she sent those message to him, though. She never told me of plans to go to Dallas for the storm.”

In a later interview with CBS News, Walters said that he was planning to travel to Dallas to ride out the storm. Walters said that if McDowell was planning to go there too, she would have told him. Walters told CBS, “[Steve McDowell] showed me a message on his phone where she said she was going to get the kids and go to Dallas. I have reservations about believing that she sent that message… I have strong feelings about what’s happened but I’d rather not voice them right now.”

3. McDowell Is in a Relationship With a Jeweler Named Paul Hargrave

CBS News reports that McDowell is in a relationship with jeweler Paul Hargrave. He told the network that on August 25, McDowell texted him about road conditions in lieu of the hurricane.

According to his LinkedIn page, Hargrave is a gemologist at Robson Diamond Jewelers in Baytown, Texas. On his Facebook page, Hargrave says he is a fourth generation gemologist. He writes, “I love what I do and look forward to each day.”

4. As the Search Continues, McDowell’s Car Has Been Found

KSWO reported on the night of August 29 that McDowell’s car had been found. The station added that two people were being questioned by the FBI as a result of the find. Those people are not thought to have any connection to the disappearance.

The KSWO report also said that McDowell may have been seen on August 25 “near Baytown or Mount Belvieu.”

CBS News reports that McDowell’s car was found outside of a Motel 6 in Mount Belvieu. Paul Hargrave told CBS, “I immediately tried to get there, but the flood waters were just too high.”

Dateline reports that McDowell’s computer was salvaged by investigators despite flood damage. That same report indicated that investigators were prepared for the fact that finding McDowell’s car may be difficult due to flooding.

Her cousin, Melissa Cherry told the Baytown Sun that McDowell had been driving a black Mercedes.

5. Her Cousin Says the Family Has Received Phone Calls Saying McDowell Has Been Kidnapped

Melissa Cherry told the Baytown Sun that numerous people have called the family claiming to have kidnapped McDowell. While some have tried to extort money from the family.

McDowell is a third generation real estate agent, according to her profile at Virginia Malone & Associates’ website. Her uncle told Dateline that prior to getting into real estate, McDowell had been a flight attendant with ExpressJet. Walters added he is a father figure to McDowell after he parents died when she was 11 years old. He was the subject of an extensive feature in the July 2016 issue of Out Smart magazine. 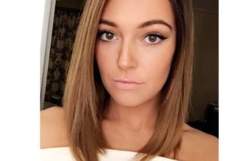