Kim Jong-Un, the Supreme Leader of North Korea and Chairman of the Workers’ Party of Korea, has agreed to meet U.S. President Donald Trump at summit in Singapore. Kim, who is believed to be between 33 and 34 years old, was educated in Switzerland or France before attending universities in North Korea.

Kim became leader of his country in December 2011, after the death of his father, Kim Jong-il. His grandfather, Kim Il-Sung was the first leader of North Korea, from its establishment in 1948 until his death in 1994.

GettyThis photo of Kim Jong Un in a factory was released in 2013.

The Washington Post reported in 2009 that there were some observers who believed Kim attended the English-language International School of Bern, Switzerland’s capital city. In 2009, the Swiss magazine L’Hebdo reported that he became friends with the children of American diplomats. He also learned French and German, and studied under the false name Pak Chol.

L’Hebdo reported that school officials and children thought Kim was “the son of the driver of the embassy.” His friends noted that he was shy, but he loved skiing, the NBA and Jean-Claude Van Damme movies.

In 2001, at age 15, Kim reportedly left Switzerland and returned to North Korea.

2. He Also Attended Liebefeld-Steinhölzli Schule, a German-Speaking School in Bern, as ‘Pak Un’

Also in 2009, when it became clear that Kim would succeed his father as leader, The Washington Post reported that Kim also studied at Liebefeld-Steinhölzli Schule, a state German-language school in Bern from 1998 to late 2000. There, he was known as “Pak Un” to his teachers.

The Post discovered that Kim was registered as the son of an employee at the North Korean embassy in Bern. The school’s principal at the time told the Post that he never saw Kim’s mother or father. In place of his parents, North Koreans would show up to apologize, claiming Kim’s parents couldn’t speak German.

The Post reported that North Korea observers think that “Pak Chol” at the International School of Bern was actually Kim Jong Chol, Kim’s older brother. His school friends told the Post that Kim knew English and spoke German, although he struggled with grammar and the Swiss accent. He was also described as awkward around girls, but became friends with other immigrant students who loved the NBA.

“He was very explosive. He could make things happen. He was the playmaker,” Nikola Kovacevic, a former friend, told the Post in 2009. “If I wasn’t sure I could make a shot, I always knew he could.”

In 2010, one former classmate told CNN that “Pak Un” told him he was the “son of the leader of North Korea.”

In 2012, the University of Lyon in France used facial recognition software to compare a photo of “Pak Un” taken in 1999 with a photo of Kim released after he became North Korea’s leader. The head of the Laboratory of Anatomic Anthropology said there was a 95 percent match of the two faces.

Also in 2012, Le Matin reported that Switzerland documents show that Kim might have been in Switzerland much earlier than previously thought. They appear to show that he arrived in November 1991, when he was only 9 years old.

King Jong Il is believed to have sent all of his children to Switzerland. Le Figaro notes that Kim Jong Il also sent the mother of his two youngest sons to Geneva.

Most North Korean observers agree that when Kim returned to North Korea, he was enrolled at the Kim Il-Sung Military University. The officer- training school is located in Pyongyang, North Korea’s capital. The New York Times reports that he attended the school from 2002 to 2007, but was mostly educated at home.

Before Kim became North Korea’s leader, the only confirmed photo of him known to the West was a grainy image taken when he was 11 years old. His mother was Ko Young-hee, the third woman Kim Jong Il married. She died in 2004 from breast cancer and was also the mother of Kim Jong Chol.

Kim Jong Il also had two other children. His first wife, Sung Hae Rim, was the mother of Kim Jong Nam, who was assassinated in February. Kim Young-sook and Kim Jong Il had a daughter, Kim Sul-song.

5. Kim Also Has an Honorary Degree From HELP University in Malaysia

Kim also has an honorary doctorate from HELP University, a private college in Kuala Lumpur, Malaysia. He became the first foreign leader to receive an honorary degree from HELP, reports the Malaysia Star.

HELP University president Datuk Dr Paul Chan defended the university’s decision, saying in a statement that the degree was meant to show Malaysia reaching out to the North Korean people.

“We should use education to help the people of DPR Korea have a better life and a higher standard of living. Above all, let’s help them integrate faster into the global network of open societies,” Chan said. “I hope that using this ‘soft constructive’ approach we can help them and North Asia and the world to be a better place for mankind.”

Unlike most countries, Malaysia had a good relationship with North Korea. However, after Kim Jong Nam was assassinated in Kuala Lumpur, the North Korean ambassador was expelled from the country. 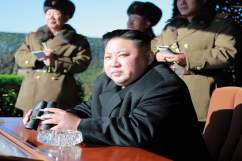