Trump arrived in Corpus Christi at around 12:30 p.m., then met with local leaders and relief teams for a briefing on early recovery efforts. He’s scheduled to leave Corpus Christi at 2:30 to head to Austin, where Trump and the First Lady will tour the Emergency Operations Center at the Texas Department of Public Safety and sit in on a briefing with Abbott.

After arriving in Texas, Trump sat for a brief press conference with Abbott and FEMA Director Brock Long at a Corpus Christi firehouse. During the press conference, Abbott said 9,000 Houston residents have taken shelter at facilities designed for 5,000.

“It’s a real team, and we want to do it better than ever before,” Trump said of the local recovery effort, The New York Times reports. “We want to be looked at in five years, in 10 years from now as, this is the way to do it.”

During a press conference on Monday, Trump sent his “thoughts and prayers” to all those in Texas and Louisiana effected by the devastating floods caused by Harvey, which is now a Tropical Storm.

GettyTrump waved the Texas flag after delivering a speech.

“Recovery will be a long and difficult road, and the federal government stands ready, willing, and able to support that effort,” Trump said on Monday. “Right now, the single most important thing is the safety and security of those still in harm’s way, including the first responders who have been so terrific and brave. Protecting the lives of our people is my highest priority. Every asset at my command is at the disposal of local officials.”

“We love you. You are special. We are here to take care of you,” Trump said to the crowd.

Trump added Monday that tragic events like these bring the best out in Americans. “We are one American family. We hurt together, we struggle together, and, believe me, we endure together. We are one family,” he said.

GettyTrump with Abbott at the Texas Department of Public Safety Emergency Operations Center in Corpus Christi.

The National Oceanic and Atmospheric Administration has confirmed that Harvey broke the record for the most rainfall from a single tropical cyclone event. “Southeast of Houston, Mary’s Creek at Winding Road reported 49.32 inches as of 9 am CDT. This total is higher than the previous record of 48 inches set during tropical cyclone Amelia of 1978 at Medina, Texas,” the NOAA reported.

As The Washington Post points out, Harvey dumped three feet of rain in an area where over 5 million people live.

GettyTrump and Melania Trump arrive in Washington, D.C. after their visit to Texas.

The Space Science and Engineering Center at the University of Wisconsin-Madison found that some areas of Southeast Texas received enough rainfall to make Harvey a once-in-1,000-years event. 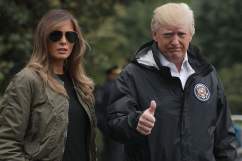 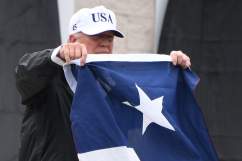