President Donald Trump, who has continued to ramp up the rhetoric against North Korea, tweeted in 2012 that President Barack Obama will “have to start a war or major conflict” to win a second term in office because of his bad poll numbers. The tweet is earning attention in light of Trump’s own poor poll numbers during the ongoing dispute with North Korea.

“Polls are starting to look really bad for Obama. Looks like he’ll have to start a war or major conflict to win. Don’t put it past him,” Trump tweeted on October 17, 2012.

Polls are starting to look really bad for Obama. Looks like he'll have to start a war or major conflict to win. Don't put it past him!

The tweet was sent less than a month before the 2012 presidential election, which ended with Obama beating Republican nominee Mitt Romney. Obama won with 51.1 percent of the popular vote and 322 electoral votes. He was only the second president ever to win a second term with less electoral college votes.

Rasmussen Reports, a poll Trump himself has cited on Twitter, shows 45 percent of likely U.S. voters approve of his performance. The Gallup Poll shows Trump’s approval rating at just 36 percent.

Earlier Friday, Trump tweeted, “Military solutions are now fully in place,locked and loaded,should North Korea act unwisely. Hopefully Kim Jong Un will find another path.” That followed his statement on Tuesday that North Korea can expect “fire and fury” if it continues to make threats. On Thursday, Trump told the media that he thought his “fire and fury” comment might not have been strong enough.

As for North Korea, its government has threatened to launch missiles that will land just off the coast of Guam, the tiny U.S. territory that is home to major American military bases in the Pacific. Guam is 2,200 miles from North Korea. 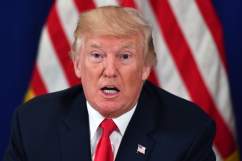