Wyndham Lathem, an associate professor at Northwestern University who researched the “Black Death,” is accused of murdering a cosmetologist from Michigan with an employee from another prominent university as an accomplice.

On August 4, after several days on the run, police announced that both men were in custody in Oakland, California.

Lathem and Warren were sought in connection with the stabbing death of Trenton Cornell-Duranleau, 26, in a luxury Chicago apartment building. Lathem lived with Cornell-Duranleau. According to CBS Local, Warren is “a senior treasury assistant at Somerville College, a part of the University of Oxford in Great Britain.” (The victim’s name was given as Trenton Cornell-Duranheau by many news sites, but his obituary spells it Duranleau).

Lathem and Warren were reported by police to be armed and dangerous. “Wanted for Murder by CPD – Our search will only intensify. Prof Latham & Mr Warren, do the right thing & turn yourself in to any police dept,” Anthony Guglielmi, Chicago police spokesman, wrote on Twitter before the capture.

He also revealed, “CPD can confirm that Prof Wyndham Lathem sent an apologetic video message to friends & family for involvement in murder of Trenton Cornell.”

According to The Chicago Sun-Times, while on the run, Lathem and Warren drove to Lake Geneva, Wisconsin “to donate money in the victim’s name to the Lake Geneva Public Library.”

1. The Victim, a Hairstylist, Died of Stab Wounds & Was ‘Mutilated’

According to CBS Local, the victim, of Pilsen, “was found dead on July 27 inside an apartment in the 500 block of North State Street. He was pronounced dead at the scene, and an autopsy ruled his death a homicide from multiple sharp force injuries.” A police source told CNN the victim was “mutilated.”

According to The Tribune, police “found blood on the bedroom door, opened it and found 26-year-old Trenton Cornell-Duranleau lying face down, dead from stab wounds to his back…In the kitchen, police found a knife with a broken blade in the trash can and another knife near the sink. Blood was everywhere.”

It’s not clear how Lathem and Warren knew the victim or each other, although Lathem and Cornell-Duranleau were Facebook friends. However, first-degree murder warrants were issued for both Lathem and Warren, according to The Chicago Sun-Times. Warren’s LinkedIn page says he’s from Swindon, United Kingdom and lists only the Somerville College employment.

The television station reported that Cornell-Duranleau was stabbed. According to the Chicago-Tribune, the victim is a licensed cosmetologist. Chicago police “responded to a 10th-floor apartment in the 500 block of North State Street about 10:35 p.m. Thursday after a maintenance worker reported getting an anonymous call that a crime was committed there,” The Tribune reported, adding that Lathem lists his home as being at the same address.

A letter sent to tenants by building management said police are “exploring a variety of motives, including a possible domestic incident.”

An obituary for Trenton Cornell-Duranleau said he was from Michigan and added, “Throughout his life he loved music and animals. His enthusiasm for life was infectious. Trenton was a caregiver and loved to help others. His youthful free-spirit fueled his love of cars, video games and cartoons.”

Cornell-Duranleau’s Facebook page says he was a hairstylist who worked at several Michigan beauty salons. He attended Creston High School in Grand Rapids, Michigan and studied and received his cosmetology license from Stanley Harris School of Cosmetology in Holland, Michigan. His social media posts revolve around cars, hairstyling appointments, and The Voice. 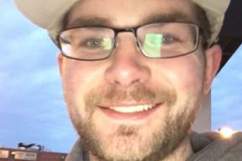 2. Lathem Worked in the Field of Microbiology & Immunology & Researched the ‘Black Death’ Plague

There are worse places to work on a grant. pic.twitter.com/klQT7KEI

The school has already deleted Lathem’s faculty profile, which used to exist on the Department of Microbiology-Immunology page. He worked at Northwestern’s Feinberg School of Medicine.

On Twitter, Lathem defined himself as an “Associate Professor of Microbiology-Immunology at Northwestern Univ., interested in bacterial pathogen evolution and plasminogen activation during infection.”

In 2015, Science Daily reported, “While studying Yersinia pestis, the bacteria responsible for epidemics of plague such as the Black Death, Wyndham Lathem, Ph.D., assistant professor in microbiology-immunology at Northwestern University Feinberg School of Medicine, found a single small genetic change that fundamentally influenced the evolution of the deadly pathogen, and thus the course of human history.”

In April, he wrote that he worked in an NIH-funded lab.

Best sign at Chicago #MarchforScience, from Dr. Melissa Brown. Due to NIH-funded labs like mine we can remain plague-free! #NUFeinbergMed pic.twitter.com/tHkw7HaGVN

On LinkedIn, Lathem wrote that his work at Northwestern “focuses on the mechanisms by which pathogenic bacteria cause disease in humans, using Yersinia species as models to understand the nature of the host-pathogen interaction during respiratory (lung) infections. My group also studies how these bacteria regulate the synthesis of factors required to cause disease at the post-transcriptional level, with an emphasis on small, noncoding RNAs and the protein chaperones that enable their diverse and many functions.” 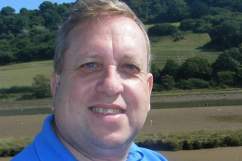 3. The Professor Had Recently Attended a Biothreat Seminar & Warren Vanished Shortly Before the Murder

My visit to Lille has been great. I got to check out the flea colony. Man can those bugs jump! pic.twitter.com/p1iSAirH

Back in England, Warren’s loved ones are trying to figure out how he came to know Lathem. Warren “was reported missing to UK police on July 25 – two days before the murder – after he disappeared from the council house he shares with his sister Tracey, 39, near Swindon,” the UK Daily Mail reported.

Daily Mail reports that Warren left behind a “heartbroken boyfriend Martin Grant, 44, who has been a relationship with the murder suspect since at least 2011” and both the sister and boyfriend “have been desperately looking for him ever since.” Warren, a former bus driver, had never been to America before, the news site reported.

On Twitter, Lathem had posted about attending a Biothreat Seminar in Washington D.C. recently.

#ASMBiothreats meeting in Washington DC has begun! Great first session on global biothreats; looking forward to the rest of the meeting

“#ASMBiothreats meeting in Washington DC has begun! Great first session on global biothreats; looking forward to the rest of the meeting,” he wrote in February.

Several of his posts involved attending conferences. “Midwest Microbial Pathogenesis Conference has always been one of my favorite meetings. Been attending since 1999 it’s been a good run! #mmpc,” he wrote in one tweet.

4. Lathem Has Been Placed on Administrative Leave

The university released a statement that says Lathem has been banned from entering any of the campuses of Northwestern University.

“Wyndham Lathem, an associate professor of microbiology-immunology, has been placed on administrative leave and banned from entering the Northwestern University campuses. There is no indication of any risk to the Northwestern community from this individual at this time,” the statement read.

“Lathem has been a faculty member in the department of microbiology-immunology since 2007. This is now a criminal matter under investigation by the appropriate authorities, and Northwestern University is cooperating in that investigation.”

Northwestern told The Chicago Tribune that Lathem’s work was focused in a lab, and he was not in the classroom.

5. Lathem Received His PHD From The University of Wisconsin-Madison

According to his LinkedIn page, Lathem received a Ph.D from the University of Wisconsin-Madison in 2003 in microbiology working in the lab of Rod Welch.

He received his A.B. in Biology from Vassar. He also served as a research technician for Rockefeller University and was a postdoctoral fellow at Washington University School of Medicine.

In England, Warren’s employer, Oxford, released a statement that said the university was “not aware of this case, which is clearly extremely concerning. We will liaise with the relevant investigating authorities and provide any assistance that is required.”