Jason Aldean’s wife has said that “angels” were watching over them as more than 50 people were shot dead in Las Vegas. Brittany Aldean, maiden name Kerr, took to Instagram in the aftermath of the attack. Brittany wrote, “We are safe. Our angels were definitely watching over us tonight. No words for what happened… Just horrific. Praying for everyone.”

On the night of October 1, Stephen Paddock shot at a crowd who were watching Jason Aldean in concert close to the Las Vegas strip. It’s thought that Paddock was held up on the 32nd floor of the Mandalay Bay casino.

1. The Couple Is Expecting a Baby Boy

On May 22, Jason and Brittany announced that they were expecting a baby boy. The pregnancy was first announced by Brittany on Instagram on May 8. She wrote, “SURPRISE!!! WE ARE PREGNANT!!! This was the hardest secret we’ve ever had to keep. This journey for us has been full of many happy times & also many tears… The biggest rollercoaster we have ever been on, without a doubt! All of the moments of heartache were followed by the biggest blessing in the entire world!! We will never take one moment for granted & can’t wait to meet you, sweet baby!!!”

Been hard to keep this secret but we couldnt be happier to add to our family. This year just gets better and better. #bunintheoven??

Jason has two children from his first marriage, daughters Keely, 14, and Kendyl, 10.

2. The Pair Got Together After a Cheating Scandal When Jason Was Still Married to Jessica Ussery

Jason and Brittany became mainstream tabloid gold back in 2012 when TMZ reported that the pair had been making out at a bar together. At the time, Jason was still married to his first wife, and mother to his two daughters, Jessica Ussery. Jason divorced Jessica in 2013 and married Brittany in 2015. The TMZ report quoted sources saying that Brittany didn’t know Jason was married when they first hooked up.

In admitting the affair, Jason first said in a statement that he had “acted inappropriately at a bar.” While Brittany said that the incident had been “a lapse in judgment and that she “would like to sincerely apologize to everyone that has been affected by this.”

It wasn’t until the 2014 CMT awards that Jason and Brittany would go public with their relationship. Not long after that, in September 2014, the couple announced their engagement. Brittany wrote on Instagram at the time, “We’ve been on cloud nine the past few days!! My heart has never been more full of happiness and love. Can’t wait to spend the rest of my life with this man. So many blessings and memories are in our future and SO thankful I get to share them with him. Thanks for all the support and kind words y’all have given us.”

Their wedding occurred in March 2015. In Touch Weekly described the wedding as “low-key” and as taking place in Mexico. The couple lives together outside of Nashville.

From 2011 until 2012, Brittany was a cheerleader with the NBA’s Charlotte Bobcats. The troupe is known as the Lady Cats. In an interview on the team’s website, Brittany said a group trip to Italy was her favorite memory. Brittany gives her favorite quote as “I can do all things through. Christ who strengthens me.” Among the things on her bucket list was to sing the national anthem at a professional sports game.

Brittany also famously competed on American Idol in 2011. Her official profile on the Bobcats’ website says that Brittany is an aspiring singer. It was Rhema, a fellow Lady Cat, who convinced Brittany to go forward for the audition. Rhema told the Bobcats website, “I heard Brittany belting it out and I told her, you can genuinely sing. She was all bashful saying she couldn’t sing, but I kept telling her she could genuinely sing.”

Kerr sang “Spoiled” by Joss Stone. Both Randy Jackson and Steven Tyler said yes during the Savannah, Georgia, show but Jennifer Lopez turned her down. The two votes were enough to send her on to Hollywood but Brittany was eliminated from the show before she got to sing in front of a live audience.

Kerr also said in a blog post on BrittanyKerr.com that, “In 2010 I entered a Victoria’s Secret Model Search contest and I placed in the top 80!”

4. It Was Brittany Who Made Jason’s Face Black When He Controversially Dressed a Lil Wayne for Halloween

In October 2015, Jason dressed up as rapper Lil Wayne for Halloween. The costume came equipped with blackface. The singer told Billboard magazine that it was his wife who made his face black. Jason said that there was “no malicious intent” for the costume. He asserted that the reason for the blackface was so that he wouldn’t be recognized.

Jason said, “In this day and age people are so sensitive that no matter what you do, somebody is going to make a big deal out of it. Me doing that had zero malicious intent … I get that race is a touchy subject, but not everybody is that way. Media tends to make a big deal out of things. If that was disrespectful to anyone, I by all means apologize. That was never my intention. It never crossed my mind.”

The article described Brittany as a makeup artist. Jason said that it had been nice to take Brittany on tour. Jason told the magazine, “It has been good having Britt out on the road. It gives her a chance to see the stuff I go through. We’re on the road, and we play music for a living. It’s hard on me. It’s a lot of traveling, not sleeping, working day after day without a day off. She gets to see that. It’s nice to have my partner with me out there. It makes it a lot easier.”

In a November 2016 interview with Rolling Stone, Jason spoke glowingly about the healthier lifestyle his wife has enforced on him. He says, ” I’m not drinking as much. I got on a Fireball train for a while. That stuff is like drinking syrup. [Laughs] I’m paying a little more attention to those things. I feel a lot better than I have in a while.”

5. It Took 7 Hours for Jason’s Crew & His Band to Be Released From the Venue

Just watched @Jason_Aldean and members of his team loaded into mini-van at Sunset & LV Blvd – 7 hours after shooting pic.twitter.com/dpEaM6CZdT

Jason Aldean and his band were kept behind for around seven hours after the gunfire broke out. The singer had been quick to post to his Instagram page that he was safe after the shooting. The singer wrote, “It hurts my heart that this would happen to anyone who was just coming out to enjoy what should have been a fun night.” 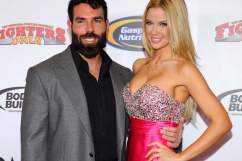 Loading more stories
wpDiscuz
0
0
Would love your thoughts, please comment.x
()
x
| Reply
Jason Aldean's wife has said that "angels" were watching over them as more than 50 people were shot dead in Las Vegas.