Getty The crowd lines up near Central Park before the beginning of the Women's March on January 20, 2018.

Participants had big expectations for the Women’s March in New York City today, and they weren’t disappointed in the slightest. The sister event took place today, January 20, and was co-hosted by the National Organization for Women. The rally began at 11:30 a.m. Eastern and then continued with a march that started around 12:30 p.m. The event began at Central Park West, with marchers continuing past Columbus Circle, East on 59th, and South on 6th Avenue. At the time of publication, an exact count isn’t yet known, but at least 85,000 marchers had been confirmed with the exact count expected to increase, according to ABC 7. (We will update this story if a more accurate count becomes available.) More than 100,000 had indicated interest on the page’s Facebook group. Last year, 750,000 marched in New York City. This is one of 250 marches taking place around the world today and tomorrow.

The march was for gender equality and basic rights for women, immigrants, and others. The theme this year was “Power to the Polls,” encouraging women to register and vote in upcoming 2018 elections. Many of the women marchers wore their trademark pink hats again and carried signs supporting the resistance. Celebrities seen marching in New York today included Amy Schumer, Edie Falco, and Anna Paquin. Gov. Cuom, Mayor de Blasio, and others also attended.

Here are more photos and videos of the crowd and participants today:

GettyPeople gather before the Womens March on New York City.

.@realDonaldTrump-The crowd for the Women’s March in NYC already looks larger than your inauguration, which was the lowest attended inauguration in the history of this country. Period.#TrumpShutdown #WomensMarch2018 pic.twitter.com/4Gjz9GDjQI

The crowd was so large that some people had trouble even entering the march:

This is the crowd trying to enter the NYC women's March #WomensMarch2018 pic.twitter.com/NSKdjZ5iGZ

It was breathtaking to see the number of people participating:

Participants got very creative with their signs.

GettyThousands hold signs and rally while attending the march on January 20, 2018.

The crowd was massive.

GettyThe crowd lines up near Central Park before the beginning of the Women’s March.

Some people got pretty creative with their signs:

GettyPeople gather near Central Park with their signs, including one of Hillary Clinton wearing a pink hat.

GettyPeople gather near Central Park before the beginning of the Women’s March.

GettyThe crowd lines up near Central Park before the beginning of the Women’s March. 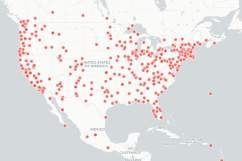