Tennessee Bureau of Investigation/Twitter Steven Wiggins pictured in a mugshot from a 2017 arrest in Montgomery County, Tennessee. He is wanted in the fatal shooting of a Dickson County deputy.

Police have captured a suspect with a lengthy criminal record accused of fatally shooting a deputy in Tennessee after a manhunt that lasted more than two days. Steven Wiggins, 31, was captured Friday morning, the Tennessee Bureau of Investigation said on Twitter. The shooting occurred Wednesday morning. Sergeant Daniel Baker has been identified as the Dickson County deputy killed in the shooting.

A resident reported a suspicious vehicle about 7 a.m. Wednesday and Baker responded, Susan Niland, a spokesperson for the TBI said at a press conference. The sheriff’s office lost contact with Baker, but tracked his vehicle using GPS. An officer from another agency located the sergeant’s vehicle about two to three miles away from the location of the original call and Baker was found dead inside, Niland said.

Here’s a picture of Wiggins shortly after his capture. More details soon! pic.twitter.com/IiOPrbQsuM

An emotional Dickson County Sheriff Jeff Bledsoe said at a press conference Wednesday, “We just ask for your help in getting the photo and information out so that we can hold this person responsible and fully accountable. And it is my prayer to God that our court will be a terror to him on the punishment he receives.”

The search for Wiggins entered a second day on Thursday, with police saying he could be “anywhere.” Late Wednesday, police charged Wiggins’ girlfriend, Erika Castro-Miles, 38, of Dickson, with first-degree murder in connection to Baker’s death. According to The Tennessean, Castro-Miles was inside Wiggins’ vehicle when he shot and killed Baker. She then fled the scene and was later found hiding under a house nearby, the newspaper reports.

On Friday, a Tennessee state trooper was on patrol in Hickman County when he spotted a person near the woodline, police said. The trooper approached him and noticed the man’s tattoos matched the description of the suspect. Trooper Kevin Burch, a rookie, ordered Wiggins to get on the ground and he “willfully obeyed.” Burch then took Wiggins into custody without incident, the TBI said. Wiggins is receiving treatment for injuries “consistent with someone who had been out in the elements for a few days,” and then will be booked into the Dickson County jail, the TBI said. The district attorney plans to seek the death penalty.

Here’s what you need to know about Steven Wiggins and the shooting:

1. Wiggins Is Suspected of Assaulting His Girlfriend & Stealing Her Car During a Tuesday Incident

Steven Joshua Wiggins is suspected of assaulting his girlfriend and then stealing her car during an incident on Tuesday in Kingston Springs, Tennessee, according to WSMV-TV. Police in Kingston Springs said he put a gun to his girlfriend’s head and slapped her and then fled in her car. She said he also pulled her hair out during the incident. The victim told police Wiggins had been “doing meth all night” and smoking marijuana.

On Thursday, the woman involved in that incident, Erika Castro-Miles, was arrested, according to The Tennessean. Castro-Miles told police during the original incident that Wiggins hit her and said he “going to kill her if she called the police,” the newspaper reports.

Wiggins was then named a person of interest in the Wednesday shooting of Deputy Daniel Baker. Tennessee Bureau of Investigation spokesperson Susan Niland said there is video evidence from the location of the shooting that helped identify him.

Niland said the resident in the area of Sam Vineyard Road in Dickson, Tennessee, called to report the suspicious vehicle, but Niland said she doesn’t know what about the vehicle seemed suspicious to the caller.

Just got to the scene. Deputies have Daisy Lewis Lane blocked off. This is where the child was reported missing. Her body was found somewhere in this field about a 1,000 yards away from her house. pic.twitter.com/XNTPJwGiwT

Dickson County Sheriff Jeff Bledsoe told reporters, “There’s not much else I can say other than our hearts shattered with this. This was one of our best deputies, he’s a supervisor, he’s worked his way up to sergeant on patrol. And he’s one of the guys that puts it on the line everyday to keep our community safe. And he was doing that again today with just a call of a suspicious vehicle and then you see what can transpire from something that’s just a suspicious vehicle. And people questions us sometimes and why we are so on edge and why there’s more than one deputy or why there’s multiple cars, this is a prime example of why we have to take care of each other and take care of our citizens.”

Castro-Miles, is being held on a first-degree murder charge, police said.

“The defendant was seated in the vehicle with Steven Wiggins when he did shoot and kill Sgt. Daniel Baker with premeditation,” an affidavit filed in Dickson County General Sessions Court reads, according to The Tennessean.

Castro-Miles is being held without bail at the Dickson County jail. Police had said Wednesday they were questioning a woman in connection to the deputy’s murder, but did not release any other details. Investigators said in court documents that Castro-Miles knew Wiggins and they received information she “participated in the incident.”

Warrants have been obtained charging Wiggins with first-degree murder in Baker’s death. 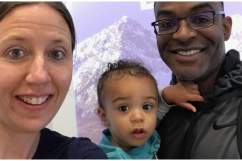 2. Wiggins Attacked His Girlfriend With an Axe in 2012 & Has a Criminal History That Also Includes Domestic Assault, Aggravated Kidnapping & False Imprisonment Arrests

Steven Wiggins pictured in mugshots from past arrests.

Steven Wiggins has a lengthy record in Tennessee, including eight arrests on domestic violence charges since 2006, records show. He was arrested in Williamson County in 2017 on an assault charge. In June 2017, he was charged with especially aggravated kidnapping and false imprisonment, also in Williamson County. In August 2016, Wiggins was arrested in Dickson County and charged with violating his bond. He had been arrested two months earlier in Fairview, Tennessee, on charges of aggravated domestic assault and resisting arrest. He also has been arrested for theft.

Wiggins was arrested in 2012 in Dickson County and charged with assault with a deadly weapon. According to the indictment obtained by the Tennessee River Valley News, Wiggins attacked his girlfriend with an axe during that incident in October 2012.

In 2006, he was charged with domestic assault in Dickson County, which was his first arrest.

Online records show Wiggins was supposed to check in for supervision with the Tennessee Department of Corrections earlier this year, but did not. He is listed in an online offender database as “absconded.”

You can see his full rap sheet and criminal record below:

3. Police Said They Were Heartbroken by the Deputy’s Death, but Driven by the ‘Focus & Resolve to Make Sure That This Person Is Captured’

The Tennessee Bureau of Investigation said prior to his capture that Steven Wiggins should be considered armed and dangerous. “Our heart’s broken,” Sheriff Jeff Bledose said Wednesday. “We’re driven right now by the focus and resolve to make sure that this person is captured. He is still considered a threat to our community. Anyone who would murder a deputy sheriff protecting our community is a threat to anyone.”

Wiggins was described as a white male who is balding with brown hair. He is 6’1″ and weighs 220 pounds. Police said he could be on foot. A massive manhunt was been launched in the area near where the shooting occurred. Several agencies, including the state highway patrol, the FBI, the U.S. Marshals Service and several local departments, were involved in the search.

NEW PICTURES: Here are pictures of tattoos Steven Wiggins has on his arms and shoulders. Again, if you spot him, do not confront him. Call 911 immediately!

“We are looking for this individual … anyone with information is urged to call 911, he is a very dangerous individual,” TBI spokesperson Susan Niland said. “They can also contact us through 1-800-TBI-FIND. It’s very important that we get this individual in custody.”

Bledsoe said, “If he is listening or anyone who knows him that can talk some sense into him that he would turn himself in, that’s what he needs to do. Because we’re not going to rest and we’re not going to leave anything turned until he is brought in for justice and is taken into custody so no one else is at risk and anyone else’s life is threatened or taken. They just need to know that we’re not resting and we have the full support and backing of everyone across this state.”

4. A ‘Blue Alert’ Was Issued, Sending Info About Wiggins to Phones of Tennessee Residents & Wiggins Has Been Added to the State’s Top 10 Most Wanted List

We're issuing a Tennessee Blue Alert for Steven Wiggins, the person-of-interest in the shooting death of a Dickson County sheriff's deputy. He is believed to be armed and dangerous.

Tennessee authorities issued a “Blue Alert,” which sent information about Wiggins to phones of residents in the state, letting them know that he is wanted. It is a relatively new law that allows law enforcement to send out an alert similar to an Amber Alert in connection to police shootings.

“Your cell phone may have just alerted you to a Tennessee Blue Alert,” the Tennessee Bureau of Investigation tweeted. “It’s similar to an AMBER Alert, but used in cases in which a law enforcement officer has been killed or seriously injured in the line-of-duty.”

We've also added Wiggins to our Top 10 Most Wanted list. There is now a reward of up to $2,500 for information leading to his arrest. pic.twitter.com/vnERWldSXQ

It was only the second time the alert has been used in the program’s history.

Wiggins was added to the Tennessee Top 10 Most Wanted list and a $15,000 reward was been issued for information leading to his arrest. 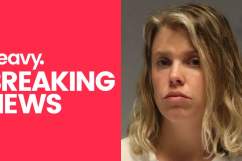 Sergeant Daniel Baker has been named as the Dickson County deputy killed in the shooting. He is survived by his wife and his young daughter. Baker was 32. According to The Tennessean, Baker had worked for the sheriff’s office since 2008. He is a Marine Corps veteran and Columbia, Tennessee, native, according to his Facebook page. He graduated from Columbia Central High School in 2004. Baker and his wife would have celebrated their fourth wedding anniversary on June 7.

Please keep Deputy Daniel Baker's wife & small child in your prayers. A gunman shot and killed him this morning in Dickson County. pic.twitter.com/SEwA22smj8

In March, Baker chased and caught a drunken man who fired a gun in the parking lot of a Mary Poppins play at the Dickson Renaissance Center, The Tennessean reports. Baker was working security while off-duty and heard the shots. He chased the suspect onto Highway 46 and detained him until other officers arrived, the newspaper reports.

In 2013, Baker and another deputy helped rescue a woman who was trapped in a truck that overturned in a creek. He and Deputy Katelynd Scott went into the waist-deep water and freed the woman, who was under water, according to The Tennessean.

You can read more about Sergeant Daniel Baker at the link below: 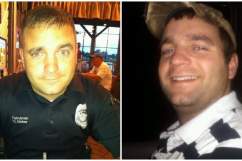 Sgt. Daniel Baker: A Tribute to the Slain Tennessee Officer

Read More
5 Fast Facts, Breaking News, Crime, Police, Tennessee
wpDiscuz
0
0
Would love your thoughts, please comment.x
()
x
| Reply
Steven Wiggins is wanted in the fatal shooting of a deputy in Dickson County, Tennessee. A "Blue Alert" was issued for him as a suspect in the death of a police officer.