Fiona Hill previously served in the Trump administration as a top advisor on Russia and Europe. She was the senior director for Russian and European Affairs on the National Security Council and a staunch critic of Vladimir Putin.

Hill resigned in July of 2019, about one week before President Trump had the call with Ukrainian President Volodymyr Zelensky. The contents of that call prompted a whistleblower complaint and helped to spur the start of a formal impeachment inquiry.

Hill testified as part of the inquiry after receiving a subpoena; her full closed-door testimony was made public and can be viewed here. She told lawmakers that former National Security Adviser John Bolton described Rudy Giuliani as a “hand grenade that is going to blow everybody up.” She said Bolton instructed her to go to John Eisenberg, a lawyer for the National Security Council, about the alleged efforts to pressure Ukraine to open an investigation into Joe Biden.

Hill also said she received death threats before she testified before Congress. The transcript of her testimony includes, “I received, I just have to te11 you, death threats, ca1ls at my home. My neighbors reported somebody coming and hammering on my door… Now, I’m not easily intimidated, but that made me mad.”nHill testified publicly on Thursday, November 21. The video of the hearing is embedded below.

Here’s what you need to know about Fiona Hill.

1. Hill Had a Shaky Relationship With President Trump

Fiona Hill took a leave of absence from the Brookings Institution to join the Trump administration in March of 2017. She held a vital position on the National Security Council as senior director for Russian and European Affairs. But in one of their very first Oval Office encounters, Trump did not recognize her.

According to the Washington Post, the president handed her a memo and told her to rewrite it, thinking she was part of the clerical staff. Hill’s response was to give Trump a confused look. President Trump reportedly interpreted this as insubordination and became very annoyed. Then-National Security Advisor H.R. McMaster was instructed to intervene and scolded Hill outside of the room.

And that was just the beginning. About two months later, the day after firing FBI Director James Comey, Trump met with two top Russian officials in the Oval Office: Russian Foreign Minister Sergei Lavrov and Russian Ambassador Sergey Kislyak. In that meeting, the president discussed classified details of an Israeli operation, a move that angered Israeli military leaders. He also reportedly said that firing Comey had taken “great pressure” off him.

When details of that closed-door meeting became public knowledge, President Trump accused members of Fiona Hill’s staff of disloyalty. Hill defended her people, which put an additional strain on her relationship with the president. After that, she was excluded from specific meetings. For example, she was left out of Trump’s meeting with Russian President Vladimir Putin in July of 2017 at the G20 summit.

2. Fiona Hill Is Considered An Expert on Vladimir Putin & Literally Wrote the Book On Him

Fiona Hill is the co-author of the book “Mr. Putin: Operative in the Kremlin.” She and co-author Clifford Gaddy took an in-depth look at Putin’s humble family history, his KGB experience and how he uses his manipulation skills to leverage power over his opponent. Hill and Gaddy identified six separate personas Putin demonstrates: the Statist, the History Man, the Survivalist, the Outsider, the Free Marketeer and the Case Officer.”

They describe his love for Russia as a driving force behind all major decisions– citing that for Putin, it’s about revenge. In the book, Hill and Gaddy explain that the fall of the Soviet Union, and Russia’s struggle to rebuild in the 1990s, instilled in Putin a fierce desire to make Russia a dominating force once again and get vengeance on the West for pushing his nation down in the first place.

The persona that Hill and Gaddy describe as being the most dangerous is the Case Officer. Putin learned how to read people and identify their vulnerabilities during his 15 years as a KGB officer. The Washington Post shared this excerpt from Operative in the Kremlin, in which Hill explains how Putin leverages knowledge to gain power over his rivals.

“It is not money that guarantees loyalty or holds the top level together. Instead, it is the fact that the money derives from activity that is or could be found to be illegal. Participants in the system are not bought off in the classic sense of that term. They are compromised; they are made vulnerable to threats. Corrupt, even illegal, activity will be kept secret as long as the individual continues to play the game.” And the referee and star player is Putin himself. This is not an old-boy network, but a “one-boy network.”

Rolling Stone also published this excerpt from the book, quoting Putin from his first year in office. He chillingly discussed how he encourages, or in some cases manipulates, people into working toward the goal he wants to achieve.

“In order to work with people effectively, you have to be able to establish a dialogue and bring out the best in your partner. If you want to achieve the result you have to respect your partner. And to respect means to recognize that he is in some way better than you are. You should make that person an ally, make him feel that there is something that unites you, that you have some common goals. That skill I think is the most important skill.”

3. Hill Has Experience in the Intelligence Community

The office has two main purposes, one being to oversee all 16 member agencies of the U.S. Intelligence Community, which includes the CIA and the NSA. It was created after the attacks of 9/11 in order to encourage greater cooperation and communication between all of the various agencies, and hopefully prevent future attacks.

The second main purpose of the office is to advise the president on national security matters. The work Fiona Hill was doing during that time would have been used to advise President Bush and later President Obama, on how to handle Russia. Hill served under three different Directors of National Intelligence: John Dimitri Negroponte, Mike McConnell and Dennis C. Blair.

Before being sworn in, Trump blasted intelligence leaders in interviews and on Twitter. Since taking office, he has said that he believes Putin’s assertion that Russia did not meddle in the election. Trump has also referred to former high-ranking intelligence officials such as James Clapper and John Brennan as “political hacks.”

In addition, Hill has been a vocal skeptic on the idea that the U.S. could have a much friendlier relationship with Russia.

4. Fiona Hill Has Been Focused on Russia and Its Neighbors for Two Decades

Fiona Hill has had her eye on Russia for nearly all of her professional career. She worked for a year as the Director of Strategic Planning at the Eurasia Foundation. The goal of the organization is to promote public policy in the former Soviet Union states, like Armenia, Belarus, Georgia, and Ukraine. On its website, the Eurasia Foundation’s described its mission:

“EF was founded as a public-private partnership in 1992. Within a year we had established our first field office in Moscow, and soon were operating in every country in the former Soviet Union. Over the course of our history, EF has expanded its reach and scope of operations, upholding our core mission to empower citizens to take responsibility for their own civic and economic prosperity.”

In 2000, Hill joined the Brookings Institution. It’s a think tank based in Washington, D.C. that, simply put, strategizes how to solve world problems. Hill serves as Director of the Center on the United States and Europe. She took a leave of absence from this role in order to join the Trump administration.

In addition to co-writing the second edition of “Mr. Putin: Operative in the Kremlin,” Hill has also written two other works focused on Russia. She teamed up with Clifford Gaddy the first time on “The Siberian Curse: How Communist Planners Left Russia Out in the Cold” in 2003. She followed that up the next year with “Energy Empire: Oil, Gas and Russia’s Revival.” The London Foreign Policy Center published that piece.

5. Hill is a Harvard-Educated Expert on Russia and the Soviet Union

Fiona Hill was born and raised in northern England. She studied Russia and modern history at St. Andrew’s University. (For royal family fans, this is also where the Duke and Duchess of Cambridge, William and Kate, attended college).

Hill traveled to this side of the pond to attend Harvard University in 1989. She earned a master’s in Soviet Studies and a doctorate in history while at Harvard. According to her Brookings Institution bio, Hill also studied in Moscow, at the Maurice Thorez Institute of Foreign Languages. 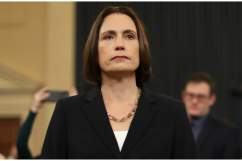