Getty Cantinflas to a poster of himself.

Mexican actor, producer, and screenwriter Mario Moreno, also known as Cantinflas, is being celebrated with a Google Doodle on what would have been his 107th birthday.

“Cantinflas won over audiences by often portraying the role of a peladito, or underdog and destitute individual who overcame the challenges of life in urban slums,” Google says in its description. “He was also admired for his comic use of language, which described his characters’ tendency to begin simple conversations and progressively complicate them so much to the point that no one understood what was being said – particularly when attempting to get out of sticky situations.”

Here’s what you need to know about Cantinflas:

1. He Was Born In Mexico City & Worked for a Traveling Tent Show as a Teenager

He was born Mario Fortino Alfonso Moreno Reyes on August 12, 1911 in Santa María La Ribera, a neighborhood of Mexico City. He was one of eight children born to María de la Soledad Reyes Guízar and Pedro Moreno Esquivel, who worked as a mail carrier. According to the New York Times, he earned change as a child by singing and dancing in the streets, and when he was a teenager, he joined a traveling tent show.

It was there he would adopt the stage name ‘Cantinflas,’ which, according to a 1992 interview, was a name invented to prevent his parents from knowing he was in the entertainment business, as they considered it a shameful profession. (“Cantinflar” means to talk a lot and say little, and “Cantinflas” means lovable clown.) During his travels with the tent show, Cantinflas worked as a dancer, an acrobat, and an amateur boxer. He also tried to emulate singer Al Jolson by smearing his face with black paint, but later developed his own stage persona by accident.

Around 1930, Cantinflas was forced to stand in for the master of ceremonies during a show, and the New York Times reports that he was so nervous that his words came out garbled. The audience was amused by his nonsensical speech pattern, and he began working on a persona that stuttered and struggled to pronounce his words. He also added baggy pants, a rope for a belt, and a thin mustache.

After perfecting his act on the tent circuit, Cantinflas met publicist and producer Santiago Reachi. Cantinflas had already made his debut with 1936’s No te Engañes Corazón (Don’t Fool Yourself Dear), but the film didn’t receive much attention, and Reachi was convinced he would be able to turn the comedian into a star. The two founded Posa Films in 1939, and scored a massive hit the following year with Ahí está el detalle (Here’s the Point).

The 1941 Ni sangre, ni Arena (Neither Blood, nor Sand) was an even bigger hit, breaking box-office records all over Latin America and turning Cantinflas into a household name. He would continue to flourish throughout the 1940s, with notable titles including El gendarme desconocido (The Unknown Policeman), Soy un prófugo (I Am a Fugitive) and El Mago (The Magician).

Cantinflas transitioned to Hollywood in the 1950s and appeared in the film adaptation of Around the World In 80 Days, which earned him a Golden Globe nomination for Best Actor In a Musical or Comedy and won the Oscar for Best Picture.

He followed up 80 Days with Pepe, a comedy that earned him a second Golden Globe nomination and included cameos from legends like Frank Sinatra, Bing Crosby and Judy Garland. Pepe underperformed at the box office, however, and feeling that the language barrier would impede his Hollywood career, the comedian returned to Mexico and began making films under the production banner Cantinflas Films.

3. He Donated Half of His Annual Earnings to Charities In Mexico City<

During his 1950s heyday, Cantinflas was earning more than $1.5 million a year and was referred to by the Los Angeles Times as the world’s highest-paid comedian. He owned five homes, an extensive art collection, a swimming pool, a bowling alley, a theater and several beauty salons. In addition to his expensive tastes, however, Cantinflas made a point of giving back to the people and supporting those who were in need.

Cantinflas reportedly donated half of his annual earnings to various charities and families in Mexico City. In 1966 alone, he gave out over $175,000 of his own money. He supported more than 250 destitute families in the Mexico City slum of Granjas, and later built 64 apartment houses that he sold to these families for a fraction of their worth.

In addition to the money that he gave away, Cantinflas raised money for charities by appearing at dozens of annual benefits. The most notable of these benefits were the ones where he performed as a wacky bullfighter, which consistently sold out the Plaza Mexico Stadium.

Cantinflas also made contributions to local orphanages the Roman Catholic Church, making him something of a folk hero in Mexico City. He was the president of the Asociación Nacional de Actores (National Association of Actors) and the first secretary general of the filmmaker union Sindicato de Trabajadores de la Producción Cinematográfica.

4. He Was a Lifelong Supporter of Labor Politics & Unions Laws

Cantinflas was a practitioner of political satire in his films. “When Americans think of Mexican humor, they think of the big, over-the-top pratfalls,” says columnist Gustavo Arellano. “But Mexican humor is far more complex than that. I would argue far more interesting in wordplay than American has even ever tried to. And Cantinflas, with all his puns and double entendres, was the grand exemplar of that.”

Furthermore, Professor Juan Gabriel Moreno told NPR that Cantinflas’ mockery of the rich and authorities was a means of revenge for the Mexican people. “When he bamboozled a cop or a politician,” he wrote. “Cantinflas was just doing what an entire people fantasized about doing: talking back.”

The comedian’s interest in labor unions proved to be a brief deterrent for his career. In 1946, he signed a contract with Columbia Pictures and planned to crossover into Hollywood, but his association with the Mexican labor struggle made the studio wary. After Cantinflas sat down to talk with President Manuel Ávila Camacho on behalf of the National Association of Actors, he opted to return to the theatre instead of sign with Columbia. It would take a decade for him to make his proper English-language debut.

Cantinflas wed Valentina Ivanova Zubareff on October 27, 1936, and they remained married until her death in 1966. They never had children, but Cantinflas did have a son named Mario with another woman in 1961. Cantinflas and Valentina adopted him and changed his full name to Mario Arturo Moreno Ivanova.

Cantinflas died of lung cancer on April 20, 1993 in Mexico City. Thousands of citizens reportedly attended his funeral. The ceremony was a national event, and ended up lasting three days. He was laid to rest at the Rotonda de Las Personas Ilustres, and was honored with a moment of silence by both the Mexican heads of state and the United States Senate.

After Cantinflas’ death, there was a decades long battle between his son and the comedian’s nephew, Eduardo Moreno Laparade, over control of his 34 films. According to Univision, Laparade claimed that Cantinflas gave him a written notice to the rights of the films on his deathbed. Mario argued that he should own the films because he is the direct heir. The latter eventually won the rights to the films in 2005. 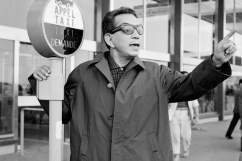