Cindy McCain is the widow of Senator John McCain, who died on August 25, after a battle with brain cancer. On Friday, August 31, Cindy took to Instagram to share a photo of herself standing with her two sons, Jack and Jimmy, as they waited for McCain’s body to arrive. You can see the photo below.

Waiting for our hero @senjohnmccain

The photo received more than 7,000 likes since it was posted on Friday.

“Our country mourns with you. Your grace and poise guiding us as your husband would have done. A hero and a gentleman. He will be missed,” wrote one Instagram user.

“Grateful for your family’s service and sharing your sorrow. The whole country feels such heart ache now. Please know we all love you and cherished Senator McCain,” wrote a second.

“You define the word class and grace as your husband defined the word hero,” added a third.

It has been an extremely emotional week for Mrs. McCain, who has attended the various memorial services held for her late husband. She has been leaning on her children to get her through this difficult time.

Cindy McCain was married to John for 38 years. Together, they welcomed four children, Jimmy, Jack, Meghan, and Bridget (John also had three other children from a previous relationship). Cindy gave birth to three of the couple’s children, Jack, Jimmy, and Meghan. She and John adopted their daughter, Bridget, from Bangladesh in 1991.

John and Cindy McCain were a perfect fit. Those who knew them best simply couldn’t deny how in tune with one another they had been over the years.

“The bond between them is just incredible,” family friend Betsey Bayless told People Magazine in 2008.

Cindy is with her family at her husband’s memorial service at Washington National Cathedral in Washington, D.C. The family will hold a private ceremony for McCain on Sunday, September 2, before he is buried. 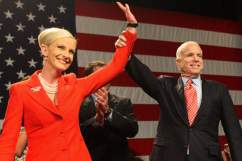 Loading more stories
wpDiscuz
0
0
Would love your thoughts, please comment.x
()
x
| Reply
Cindy McCain posted a photo on Instagram showing her waiting for her husband's casket to arrive. In the caption, she called John her 'hero.'