The video is brief, just 30 seconds, but in it, a woman named Sierra Dawn Measelle goes on a racist and xenophobic rant at a young Asian woman who records the incident.

Some say Measelle sounded drunk. Some mock her for her xenophobic rhetoric against Asians while driving a Hyundai. Some, stunned by her racism and xenophobia, are defending their city, Portland, arguing she does not represent PDX. Some are slinging because she’s been identified as a stripper though some in the adult entertainment industry say her speech is not representative of them either. Others posted her mug shot from a 2013 arrest for disorderly conduct and drug possession.

People are angry and have come for Measelle, 29, for her hate speech.

Selina Cairel, who recorded the racist attack aimed at her, asked people to not threaten Measelle despite her bigotry. She later removed the post.

1. In the Video Measelle Tells Selina Cairel That She’s an ‘Illegal’ & Her Parents ‘Worked for Dirt’

This just happened in Portland, Oregon. Racism exists. Y'all gotta wake up, can't believe this happened in my own city. Her name is Sierra Dawn Measelle and she's a stripper at the Stars in Bridgeport. RT and get this spread. pic.twitter.com/CJF0NLQXU8

In the video of two white women in a Hyundai, the passenger trying to obscure her face with her hair, the driver, Measelle, leans over to engage with Selina Cairel and her friends.

“Before you say anything you might want to make sure you’re actual legals and then call the cops,” she says.

Cairel and her friends ask, call the cops “about what?”

Measelle says: “You’re illegals crossing the border. And your parents probably had to work in fucking dirt just to get here.”

Cairel says this is what she has to deal with “in Portland.”

Measelle lives in Newberg, Oregon according to online records.

She explained that she was out with friends and “had a terrible encounter with a girl who was saying the nastiest most racist thing possible.”

Cairel said that after “wasting my breath trying to knock some sense into her I just let her speak. It started when she had said in the most demeaning poor excuse of a supposed ‘Asian’ accent that she’s Asian, she ‘can’t see that’s why (she) can’t drive.'”

Cairel said she happened to be parked next to her and “did not instigate this at all.”

“She was the one to pull out her phone first saying, ‘This should go on Instagram’ and started recording me. I literally just got back to my car from getting some Voodoo donuts and just wanted to go home. I never let this pass and wanna make sure this kind of behavior is seen and how people of color encounter this all the time. I wanna make sure she gets seen and her racist, ignorant behavior is exposed.”

3. Furious Social Media Users Outed Measelle Similar to What Has Happened Over Other Videos Exposing Racists

Oregonians and others were incensed by Measelle’s comments to Cairel.

“The girl recording is one of my best friends. She did nothing and this Sierra girl just verbally attacked her.”

The girl recording is one of my best friends. She did nothing and this Sierra girl just verbally attacked her

Not unlike myriad others, this Twitter user said this kind of behavior in Portland should not be tolerated.

Uh uh, not in my fuckin city.

For many from Portland, they were mortified and apologized for Measelle’s behavior saying she is not emblematic of their city. Or at least they hope not.

I live here- I’m not surprised. I’ve had people yell “Ni***r” at me while I was walking or driving.

But others posted that out-in-the-open racism is more prevalent than ever. “I live here- I’m not surprised. I’ve had people yell “Ni***r” at me while I was walking or driving.”

Measelle now joins Alison Ettel known as Permit Patty who called police on a little girl selling cold water outside her apartment for hot and thirsty baseball game goers in San Francisco, and Jennifer Schulte, known as BBQ Becky, who called police on a black family grilling in a public park in Oakland, and Repo Rachel who calls police on a man getting into his own car in Milwaukee and Stephanie Stremple known as Pool Patrol Paula who assaulted a black child in a pool in South Carolina. And the list goes on and on. 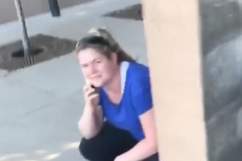 4. Cairel Asked People Not to Threaten Measelle, Who Has Shuttered Her Social Media. Then Cairel Removed the Post

Cairel’s Facebook post and video of Measelle’s racist rant has been viewed, shared, and commented on by more than 14,000 people who are overwhelmingly outraged by Measelle and supportive of Cairel.

Cairel had a post up for several hours asking people to please not make threats against Measelle despite her “bigotry” and her hurling of racist and xenophobic magniloquence, but she has since taken it down.

“Please stop with sharing her address and the horrible threats, she’s an ignorant bigot but she doesn’t need her life to be threatened. Thank you guys!”

Many said that Measelle is getting the payback she deserves.

“Hope she finds a pumpkin seed in one of her pumpkin spice lattes and chokes on it,” one person commented though likely sarcastically.

Meanwhile, Cairel wanted to let people know she was “legal.”

Actor who played ‘Mr. Sulu’ on Star Trek and activist George Takei had his take on the incident: “This is very disappointing to see. We need to reach young people as well, it seems, with a more hopeful, inclusive message.” Takei posted this tweet about Maeselle in NextShark, “the Voice of Global Asians.”

5. Measelle is a Stripper With a Criminal Record. Some Oregon Strip Clubs Deny, Shun Her as do Some Sex & Adult Entertainment Industry People

Measelle has a minor criminal record that includes a disorderly conduct charge, possession of a controlled substance and violating open container laws, according to court records.

She has shuttered her social media and her Instagram, which was set to private has access to her Piknu account which is also private. There are a number of references to Measelle online based on her profession as a stripper. There are also reports that she is a part time hairdresser.

Twitter and Facebook sleuths located her address, phone number and identified a few strip clubs where some suggested Measelle works or worked. At least two have responded saying she does not work at their venues, Stars Cabaret and Casa Diablo (The Devil’s House). Some have said on social media that the clubs have said Measelle lost her job with them after the video went viral.

And, plenty of adult entertainment workers say she may be a stripper but is not one of them.

I have friends who have worked in the adult entertainment industry and Sierra Dawn Measelle doesn't represent the folks I know. The fact she is a stripper doesn't have anything to do with her being a racist pig with a shitty fake tan.https://t.co/QBXRWYXCZM

“I have friends who have worked in the adult entertainment industry and Sierra Dawn Measelle doesn’t represent the folks I know. The fact she is a stripper doesn’t have anything to do with her being a racist pig with a shitty fake tan.

I’m super annoyed by twitter and media etc taking this Portland stripper as a means to call out sex workers LOL STOP. She was a racist. You have racist people at target. Her job is irrelevant. This is about miss Sierra Dawn Measelle being RACIST. It’s not about her job. pic.twitter.com/hPiwS8LDEB

“I’m super annoyed by twitter and media etc taking this Portland stripper as a means to call out sex workers LOL STOP. She was a racist. You have racist people at target. Her job is irrelevant. This is about miss Sierra Dawn Measelle being RACIST. It’s not about her job.”

Read More
5 Fast Facts
wpDiscuz
0
0
Would love your thoughts, please comment.x
()
x
| Reply
In a 30-second video, a Portland woman, Sierra Dawn Measelle, goes on a racist and xenophobic rant at a young Asian woman who records the incident.