Getty Sen. Bill Nelson (D-FL) speaks during a round table meeting with education leaders from South Florida at the United Teachers of Dade Headquarters on August 6, 2018 in Miami, Florida.

Senator Bill Nelson has been representing Florida in the upper chamber of Congress since 2000. He has a long, successful background working in politics. The only election Nelson had ever lost was in 1990, when he ran for governor of Florida. He was a member of the U.S. House of Representatives from 1978 until 1991 and previously served in the Florida legislature as well.

Senator Nelson ran for a fourth term against current Florida governor Rick Scott. The race was too close to call and triggered a recount. Nelson eventually lost to Scott by about 10,000 votes.

Heres’s what you need to know.

1. Bill Nelson Has Been Involved in Politics Since His Middle School Days

Senator Bill Nelson (L), Democrat from Florida, who sits on the Armed Services and Foreign Relations Committees, enjoys some time with U.S. Army 10th Mountain Division SPC Andy Rivera from Miami, Florida and other soldiers March 26, 2002 at the Bagram airbase in Afghanistan.

Senator Bill Nelson is a lifelong Floridian. He was born September 29, 1942, in Miami. But he spent much of his childhood in Brevard County, which is east of Orlando. According to his campaign website, Nelson’s family has been in the sunshine state for five generations. His senate bio further clarifies that his family arrived in Florida in 1829. Nelson’s grandparents owned land that is now the home of the Kennedy Space Center.

Nelson’s childhood involved working on a farm. Nelson raised livestock and became involved with the 4-H program. The Florida 4-H Hall of Fame profile on Nelson states that he served as treasurer, vice president, and president of the State 4-H Council over the years. He won several blue ribbons for junior cattle breeding. Nelson reflected on how his leadership roles within the program prepared him for a professional career in politics. “Florida 4-H provided me with an early training in government and politics. I am a much stronger and better person because of the many positive experiences I had in 4-H.”

Nelson was elected student body president during middle school and later served as class president at Melbourne High School. Adding to his young resume was the role of president of Key Club International. He traveled to Europe to speak on behalf of the organization. The 4-H Hall of Fame profile states that Nelson was even given his own office at his high school, to “help him keep up with all of his extra-curricular activities.” The school even assigned Nelson his own secretary.

Nelson did all of this while also dealing with the death of his father. Clarence Nelson died of a heart attack when his son was 14 years old. Nelson told the 4-H Hall of Fame, “You do what you have to do – you have to cope, and so you do. It was just my mother and me then.”

After high school, Nelson first attended the University of Florida. He spent two years there before transferring to Yale. His roommate at Yale was Bruce Smathers, the son of Senator George Smathers. This connection granted Nelson his first experience on Capitol Hill. He interned in the senator’s office for two summers. When Senator Smathers passed away in 2007, Nelson spoke at his memorial service.

Nelson graduated from Yale in 1965 with a political science degree. He went on to law school at the University of Virginia. 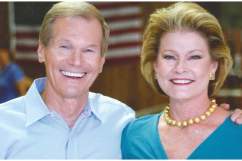 2. Bill Nelson Served in the Military Before Opening a Law Firm & Launching His First Political Campaign; His Wife, Grace Cavert, Campaigned Alongside Him After Their Honeymoon

Senator Bill Nelson was part of the ROTC during college. During law school, he divided his time between classes and taking care of his mother, who had been diagnosed with Lou Gehrig’s disease. Nannie Merle passed away in 1968, around the time Nelson graduated from law school.

Once active duty was over, Nelson opened his own law office in Florida. Soon after, he was introduced to the woman who would become his wife. Nelson was asked to speak at a Key Club event in Jacksonsville. His old college roommate, Bruce Smathers, introduced him to Grace Cavert at that event. The couple tied the knot in 1972.

And there was no rest after getting married. Nelson had decided to run for the Florida House of Representatives. His wife joined him on the campaign trail. He won the election in 1972 and served in the Florida Legislature until 1978. According to Nelson’s NASA bio, he was instrumental in enacting “the nation’s first state law to protect consumers from computer fraud and advocated for responsible growth management laws.”

In 1978, Nelson decided it was time to run for a seat in the U.S. House of Representatives. He won his race served six terms on Capitol Hill, until 1990. He was an advocate for creating a balanced federal budget. And one of Nelson’s top priorities as a member of Congress was championing for NASA.

3. Bill Nelson Orbited Earth on Board the Space Shuttle Columbia in 1986 While He Was Serving in the House of Representatives

As referenced above, Bill Nelson grew up on land that became the Kennedy Space Center. The center opened in 1962 and is a major employer in Brevard County. Nelson was deeply committed to supporting NASA after becoming a member of the House. He was made chairman of the Science, Space and Technology subcommittee, which oversaw NASA.

Bill Nelson was given the opportunity to launch into space in 1986. He spent six days on board the space shuttle Columbia. He traveled more than 2.1 million miles in 96 earth orbits and logged over 146 hours in space, according to NASA.

The experience was monumental for Nelson. He wrote in his memoir that as a congressman, he felt it was important to truly truly understand what astronauts experienced. “That meant more than simply reading books and visiting the Cape. If I was going to speak about the space program accurately in Congress, I wanted to feel what the astronauts felt,” he wrote in a 1988 memoir entitled “Mission: An American Congressman’s Voyage to Space.”

Nelson described the physical training that went into preparing for a space launch in an interview with the Tampa Bay Times. He explained that he ran four miles per day and had a strict gym regiment. He told the newspaper that he was in the “best shape of my life at age 44. I was on top of everything and quick mentally.”

He also described the moment that he watched the Challenger explode. The space shuttle was launched just 10 days after Nelson landed back on Earth from his own mission on board the Columbia. The Challenger broke apart 73 seconds after takeoff, killing all seven crew members. Nelson wrote in his memoir, “My mind did not want to accept what my eyes were seeing. I kept waiting to see the Challenger emerge out of the smoke.”

4. At Age 76, Bill Nelson Maintains a Healthy Diet & Workout Regiment; He Had Surgery in 2015 After Being Diagnosed with Prostate Cancer

Senator Bill Nelson is 76 years old. But that has not slowed down his workout regiment. In the Tampa Bay Times interview referenced above, Nelson shared that “exercise is just part of my life.”

He is a regular jogger and apparently likes to joke with congressmen several decades younger than he is about their own fitness. Nelson told the Florida newspaper that he sticks to running on grass to protect his knee. He had his left knee replaced and hard pavement would be too strenuous on the joints. He also does push-ups and sit-ups. As for diet, Nelson eats healthy, sticking with chicken or fish with vegetables on a regular basis.

In July 2015, Bill Nelson had surgery after being diagnosed with prostate cancer. The cancer was detected during a routine screening, Politico reported at the time. His wife, Grace, released a statement sharing the good news that doctors were able to remove all of the cancer. She joked that her husband was “raring to go” soon after surgery and wanted to get back to Capitol Hill, but that “the doctors won’t let him out of the house for a few more days.”

5. Senator Bill Nelson Has Been in the Senate Since 2000; He Has a History of Supporting the Space Program & Has Advocated for an Assault Weapons Ban

Bill Nelson has been a member of the U.S. Senate since 2000. He is currently a senior member on three committees: Armed Services, Finance and Aging. He is a ranking member for the Committee on Commerce, Science & Transportation. On his campaign website, Nelson says that he uses his place on the Commerce, Science, and Transportation Committee to push for STEM career training and education programs “so that Florida remains at the forefront of American ingenuity, in order to not only create, but fill the jobs of the future.”

Some of his career highlights in the Senate include:
– Co-sponsor of the Assault Weapons Ban of 2017
– Pushed for funding for Puerto Rico recovery efforts following Hurricane Maria
– Supports the Equal Rights Amendment and marriage equality
– Worked with former Senator Mel Martinez, a Republican, in 2006 to pass a law that banned drilling off the Gulf Coast of Florida
– Created a congressional hotline to help senior citizens avoid scams

Nelson reportedly has a solid relationship with fellow Florida senator Marco Rubio. As reported by USA Today, the two have teamed up on issues, such as supporting the space program and on school safety. Rubio said he would not campaign against Nelson, stating publicly, “I could not ask for a better partner — especially from the other party.”

Senator Nelson’s recent votes include voting against the confirmation of Justice Brett Kavanaugh, voting to reinstate net neutrality rules, and supports rolling back some banking regulations imposed by the Dodd-Frank Act.

READ NEXT: Rick Scott Net Worth: 5 Fast Facts You Need to Know