Tony Berlin has been married to Fox News host Harris Faulkner since 2003. They met while working at rival TV stations in Minneapolis, Minnesota.

Faulkner is known nationwide due to her two shows on Fox’s daytime lineup, Outnumbered and Outnumbered Overtime with Harris Faulkner. Faulkner was also tapped to host the July 19 primetime special Harris Faulkner Presents: The Fight for America, which focuses on civil unrest and race relations. The special debuts at 10 p.m. on Fox News.

Faulkner is expected to headline more town-hall discussions and special programs for the network in the future. She told Variety that the conversations she and her husband have at home mirror the challenging discussions taking place around the country. “We are raw with each other. I think that’s where we all need to be as Americans. We can take it.”

1. Tony Berlin Shares His Wife’s Love for Journalism; He Worked as a Reporter, Anchor & Producer for 15 Years

Tony Berlin earned a degree in political science from Occidental College, a liberal arts school in Los Angeles, in 1989. He also played basketball at the Division-3 college.

Berlin traveled across the country to Washington, D.C. for his first job as a producer with Cox Broadcasting. According to his LinkedIn profile, he returned to school in 1992 for a master’s degree. He studied public policy and journalism at American University.

Berlin spent 15 years of his professional career working both behind and in front of the camera, according to the bio on his company’s website. He worked as a reporter and anchor in Roanoke, Virginia and Savannah, Georgia.

Berlin’s long-running affiliation with CBS News began in Dayton, Ohio, where he lived for three years. He worked at CBS affiliate WHIO-TV before relocating to Minneapolis, Minnesota, in 1998. Berlin worked at CBS station WCCO-TV as a lead reporter and fill-in anchor for seven years.

It was during this time period that he met Faulkner, who was working as an evening news anchor for the ABC affiliate in Minneapolis. They met through mutual friends. In 2005, the couple made their move to New York City. Faulkner began working for Fox News while Berlin was stationed on the west side of Manhattan at CBS. He was a field producer for WCBS for one year, before deciding to make the transition to public relations.

2. Berlin Launched His Own Media Relations Company in 2011

Berlin decided to leave the CBS newsroom and get into public relations in 2006. He gained experience on that side of the industry working as a media relations manager for Padilla Speer Beardsley.

He followed that up with three years at Credit.com as the director of media relations, according to his LinkedIn account. His role there involved booking TV appearances and interviews for financial experts. Berlin’s twitter account shows a continued affinity for financial news; he frequently posts and shares articles about the state of the markets, tips for paying down debt and how best to invest your money.

In January 2011, Berlin branched out on his own and founded his own company, Berlin Media Relations. On its website, Berlin touts his ability to secure positive media exposure for clients thanks in part to his years working as a reporter and producer: “Tony’s brand of public relations combines his unique understanding of behind-the-scenes television and an unparalleled list of contacts. In television, it’s all about the right timing and right person to pitch to, and Tony’s contacts are second to none.”

3. Berlin & Faulkner Got Married in His Home State of Arizona & Have a Second Home There

Faulkner and Berlin tied the knot on April 12, 2003. The wedding took place in Rio Rico, Arizona, near Berlin’s hometown of Tucson. (He attended Amphitheater High School).

The couple returns to Arizona often to visit extended family. According to the Western Journal, Berlin and Faulkner own a home about 20 miles north of the border with Mexico.

In an interview with FanSided, Berlin explained that he grew up cheering on the Arizona Wildcats and is still a big fan to this day. 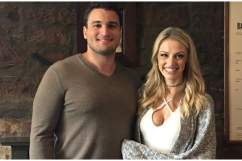 #flashbackfriday | When my babies were actually babies. (2011) Best thing I ever did was to marry this now Hubby-Papa #fbf #arizona #tubac

#tbt When you promise to give the Lord your life, He keeps his promise, too. #baby #baptismday Chapel in our home town in southern #Arizona

The couple chose Arizona as the best place to have their children baptized. According to Faulkner’s Instagram page, Danika was baptized in Tubac, Arizona. Faulkner shared a throwback photo in 2016 and wrote, “When you promise to give the Lord your life, He keeps his promise, too. #baby #baptismday Chapel in our home town in southern #Arizona.”

Berlin enjoys golfing and it appears he is sharing that passion with his young daughters. He shared the video above of one of his daughters taking a swing.

The family primarily resides in northern New Jersey. Their home was featured in an article in Closer Weekly in 2017. Their 4,300-square-foot house has 4 bedrooms, 4 bathrooms, a rooftop deck and is a “hop, skip and a jump” from the Hudson River. During the interview, Faulkner joked that the family needed tall ceilings because Berlin is 6’4″.

Faulkner opened up about family life in an October 2019 interview with People. She told the magazine that it was a “blessing” to raise “biracial babies.” She gushed, “It’s beautiful for any parent to get the opportunity to have those loved ones in our lives. I’m with someone who is religiously Jewish and racially different from me. We look like a Benetton ad from the 1990s — very colorful.” Faulkner also described Berlin as her “forever boyfriend” and praised him: “I married an amazing guy. I couldn’t do it without [him].”

Berlin has never donated to any political candidates, according to the Federal Election Commission database. But he appears to lean Democrat, based on Facebook posts. In July 2018, he shared the above video showcasing President Obama. The video’s caption reads, “Share if he’s your favorite president.”

In May 2018, Berlin posted a link encouraging people to register to vote. A friend commented, “Just registering Republicans, right?” Berlin’s response was, “Charlene ❤️ Some of my best friends are Republicans ❤️”

Aside from that, Berlin appears to keep his political affiliation close to the vest and seems to focus on lighter issues. For example, in 2017 he was encouraging residents in Edgewater, New Jersey to sign a petition urging the city to add soccer lines to a field.

READ NEXT: Who Was Ainsley Earhardt’s First Husband?