Getty/Instagram Juan Granados is being represented by Michael Avenatti and is claiming assault by Tucker Carlson and others.

Juan Manuel Granados is a Virginia-based man who has accused Tucker Carlson of assault, specifically referencing an event that took place on October 13 at the Farmington Country Club.

Granados, who is represented by Michael Avenatti, is referencing an incident which transpired in the video below.

Granados, a gay latino Argentinian who received his U.S. citizenship in September, maintains that Carlson told him to “go back to where he came from.” Here’s what you need to know:

1. Granados Is Originally From Buenos Aires, Argentina, But Is a U.S. Citizen

3/3 – You told the man to “go back where you came from” before the video starts. And if you were so innocent, why didn’t you disclose it weeks ago as you recently did in connection with the protest at your home?

According to the statement released by Avenatti, Granados was accused by Carlson of being from another country, and was told to “go back to where he came from.”

Granados is originally from Argentina, but is now a U.S. citizen. His partner, Will Trinkle, is a real estate agent who went to the University of Virginia. Trinkle is the president and CEO of CW Francis Real Estate, based in Roanoke, Virginia. Together, Granados and Trinkle have a son named Oliver.

2. Granados Has a Background in Marketing, & Is Also on Multiple Art and Culture-Related Boards in the Charlottesville Area 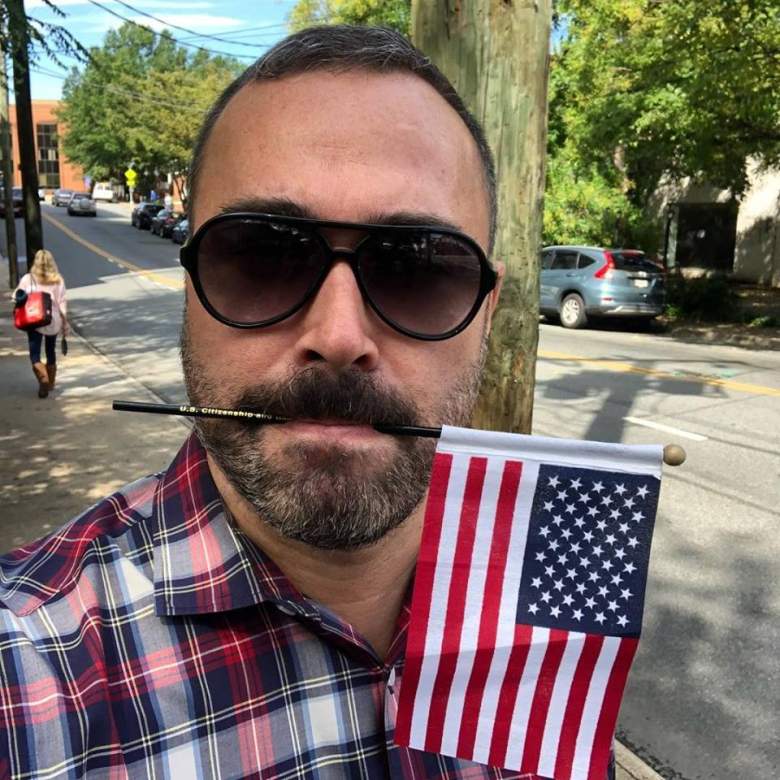 As Granados notes in his statement, he is also a strong supporter of the arts, and is on the boards of the Women’s Initiative, 2nd Street Gallery, and the Lighthouse Studio, all of which are based in Charlottesville. According to his bio page as a board member of the Women’s Initiative, Granados was involved in advertising in Argentina, and specializes in Spanish language advertising within the United States.

In addition to his advertising and marketing work, Granados is currently working on his own label of Argentinian wines, named “Dogo.”

Granados wrote, “I am a proud gay member of the Latino community and am also an immigrant.”

3. Granados & His Partner, Will Trinkle, Filed a Lawsuit Against the Roanoke Athletic Club in 2012 After it Revoked Their Family Membership

The next time @TuckerCarlson seeks to attack someone and then lie about it, he better first do his homework about the person and their credibility. Juan is a leader in the community who has a history of standing up for what is right. He is a very good man.https://t.co/E9JkGZtjru

Three weeks later, the Roanoke Athletic Club released a new official statement about family membership on its Facebook page: “A household consists of a primary member and up to one additional household member that permanently lives in the household, and any of their dependent children under the age of 22 who also reside in the household on a permanent basis …Club dues will not change; dues for the Household Membership will be the same as the Family Membership it is replacing.”

Trinkle, a real estate agent, said of the situation to ABC, “Actually it was like someone punched us in the stomach. It’s from a place we couldn’t imagine that there would be this kind of discrimination and this kind of attack. We have come a long way but this shows we still have a long way to go.”

Trinkle was given the Bernard D Mayes Award from UVA in 2012, for his bravery in taking on the lawsuit. In his acceptance speech, Trinkle said, “When I get frustrated that we sometimes have to fight so hard, that equal isn’t automatic, I remember where we’ve come and how much better life is for so many, including my family.”

4. Carlson Was Dining With His Family When He & Granados Appeared to Get Into an Altercation

1/2 – We are investigating an alleged assault on a gay latino immigrant committed by T. Carlson and/or members of his inner circle at a club in VA in Oct. It likely includes underage drinking in violation of VA law. Link to a portion of the incident:https://t.co/QcbCRHrplP

In the video above, Carlson and Granados appeared to get into an altercation for an unknown reason. Carlson has since claimed in a statement that Granados insulted his daughter, and that his son threw a glass of red wine in his face. But Granados is insistent that he did no such thing.

In an extended statement to The Hill, Carlson said, “On October 13, I had dinner with two of my children and some family friends at the Farmington Country Club in Charlottesville, Virginia,” Carlson said. “Toward the end of the meal, my 19-year-old daughter went to the bathroom with a friend. On their way back through the bar, a middle aged man stopped my daughter and asked if she was sitting with Tucker Carlson. My daughter had never seen the man before. She answered: ‘That’s my dad,’ and pointed to me. The man responded, ‘Are you Tucker’s whore?’ He then called her a ‘f*** c***.’ ”

Carlson continued, “My daughter returned to the table in tears,” the statement continues. “She soon left the table and the club. My son, who is also a student, went into the bar to confront the man. I followed. My son asked the man if he’d called his sister a ‘whore’ and a ‘c**t.’ The man admitted he had, and again become profane. My son threw a glass of red wine in the man’s face and told him to leave the bar, which he soon did.”

Carlson said he described the events to the management at Farmington, and that they revoked Granados’ membership and have since thrown him out of the club.

In a statement released via Avenatti, Granados said, “I NEVER called any member of his family any names. I never attacked his daughter as Tucker claims. I never called his daughter or son a “cunt” or a “whore” or anything approximating that. I certainly never apologized for using those words or admitted to saying them because I never said them. Many witnesses support this fact. Tucker has created this story out of thin air— it never happened.”

5. Granados Is Pursuing ‘Possible Charges’ Against Carlson, as Well as Assault & Battery Charges for Carlson’s Son

Here is a statement from my client regarding the incident with Tucker Carlson and Tucker's fabricated version of events. As a father of two teenage daughters myself, I find it disgraceful that Tucker seeks to justify his behavior by falsely hiding behind his family. #Coward pic.twitter.com/j9uX7pRdyP

Granados intends to file charges against both Carlson and his son. Avenatti has also issued a request for help by the public in identifying other men in the video of the event, including the man who was seated at the bar and the balding man who grabbed him.

Avenatti wrote a series of tweets directed to Carlson’s Twitter handle, which read in part, “You are the aggressor in the video as is your friend. The man at the bar sits there calmly. Numerous witnesses contradict your claim of innocence. Your daughter was drinking underage in a bar with your assistance and knowledge. You were intoxicated.”

Loading more stories
wpDiscuz
0
0
Would love your thoughts, please comment.x
()
x
| Reply
Juan Manuel Granados is a gay latino man based in Charlottesville, Virginia, who claims that Tucker Carlson assaulted him on October 13.