Andrew Yang, the Democratic candidate for president who has made implementing a Universal Basic Income a core tenant of his campaign, is the son of immigrants from Taiwan.

His parents, Kei Hsiung Yang and Nancy Yang, both moved to the United States during the 1960s. They met at the University of California Berkeley, where they were both pursuing graduate degrees.

During a CNN Town Hall on April 14, Yang said that his parents are supportive of his presidential run, despite initial surprise at his decision to get into the race. Yang shared that when he first told them he was launching a campaign, his mother’s immediate reaction was, “That’s nice.”

1. Kei Hsiung Yang Has a Ph.D. in Physics & Generated 69 Patents Over the Course of His Career as a Researcher

Yang 2020Andrew Yang with his parents and brother.

Kei Hsiung Yang was born on December 10, 1940, according to an online search of records. Andrew Yang stated during the third Democratic debate on September 12, 2019, that his father grew up on a peanut farm and lived in a home without a floor. Kei Hsiung Yang went on to earn a Ph.D. in physics from UC Berkeley.

The elder Yang went on to work as a researcher for General Electric and IBM (International Business Machines Corporation). He garnered a total of 69 patents over the course of his carer.

Yang’s first patent, granted in 1977 when he was working at General Electric, was for an “Electrostatic X-ray image recording device with mesh-base photocathode photoelectron discriminator means.”

Someone asked me today if I grew up thinking about running for President. Of course not. I'm Asian and my father is a physicist. My Mom is an artist. My grandfather was a geologist. My brother is a psychology professor. I became an entrepreneur. I like to solve problems.

Other examples of his patents included a “Liquid crystal display panel having a touch function;” “Input display with embedded photo sensor;” and a “Reflective light valve.” You can see the entire list along with detailed explanations of the inventions here.

2. Nancy Yang Worked at a University Before Becoming an Artist

Delayed but happy Mother’s Day to all mothers!! You all have the hardest job. Find and hug your mom today!!

Andrew Yang shared on his campaign website that his mother, Nancy Yang, previously worked as a systems administrator at a local university in New York.

Yang has won awards in Spain and Taipei for her painting, as well as a Best in Show honor at the Village Gallery of Katonah in New York. She explained on her bio why she chose to specialize in pastels as opposed to other mediums: “Pastel is a very Western medium, quite unfamiliar in the Far East, but it is well suited for expressing the Zen ideals of tranquility and harmony in natural beauty. Water and fish have become my special favorites. They seem easy for me to represent and convey both energy and inner quiet. They are also wonderfully symbolic, evoking both traditional and personal images. The hope is that the work will bring both pleasure and meaning in the viewing, as it does in the creating.”

Andrew Yang explained on his campaign website that his parents, Kei Hsiung Yang and Nancy Yang, met as graduate students at UC Berkeley during the 1960s. They had both immigrated from Taiwan.

Yang stated during a radio interview with Joe Rogan in February of 2019 that his parents’ experiences have greatly influenced his own positive views on immigration. He explained that his parents’ professional success serves as an example of how immigrants can benefit the United States as a whole.

Yang explained that he believes foreign students should be encouraged to remain in the United States after college. “It makes no sense to educate international students in U.S. universities and then send them home to compete against us. That makes no sense. If they’re going to come to the U.S. and study, we should just staple a green card to their diploma and be like, ‘hey, you got a diploma, great news you can stay here and work.’ I personally know tons of awesome Internationals who would definitely help make the U.S. more dynamic and competitive that go home and start companies.” You can read the transcript of the full interview here.

Kei Hsiung Yang and Nancy Yang met on the west coast. But they chose to relocate from California and instead raise their children in upstate New York.

An online search of records brings up former addresses in New Paltz and Katonah, New York, as well as Manhattan, for the Yangs.

Andrew Yang and his wife, Evelyn, have two young sons whom they are raising in New York City.

The Yangs have kept their sons largely out of the spotlight, except for a few photos posted to Instagram and the campaign page. The above photo of Yang and his sons was taken on Christmas Day in 2018. 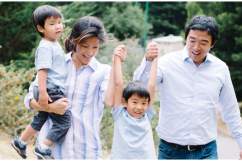