Pickens died at 91 years old on Wednesday; news of his death was confirmed by the official Twitter account for his foundation. The press release for his death reads in part, “The long-time Dallas resident, who had battled back from a series of strokes and further head injuries sustained in a 2017 fall, died of natural causes surrounded by friends and family on September 11, 2019, according to spokesman Jay Rosser.” 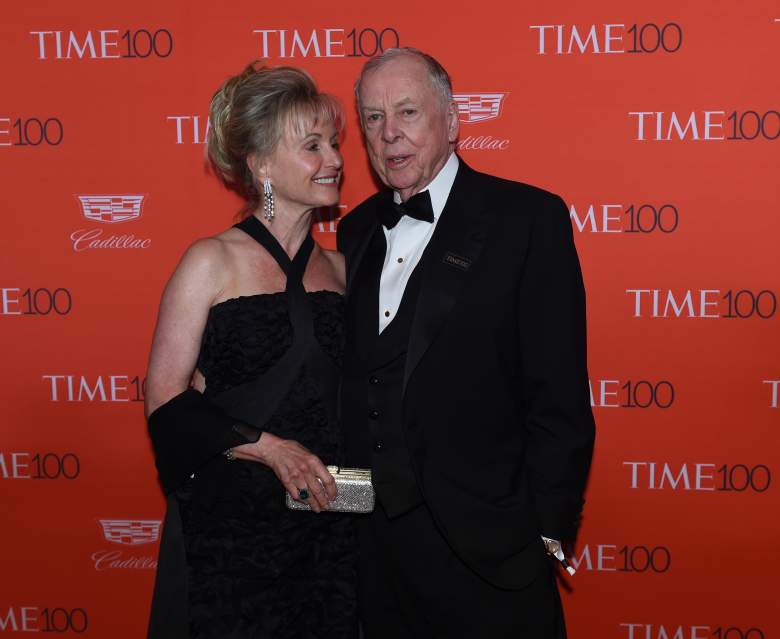 Per Forbes, Pickens’ fifth wife is Toni Chapman Brinker. They were married for a mere three years, from 2014 to 2017. The publication reports that the two had known each other for decades by the time that they were married; their connection was through Brinker’s former husband, Norm Brinker, the found of the Chili’s restaurant chain.

Another Forbes profile of Pickens revealed that the late billionaire had “Toni” embroidered into the headrest of a seat on his plane, showing a surprising level of commitment for his then-girlfriend. Brinker, who is 20 years Pickens’ junior, said of her then-85-year-old boyfriend, “He’s the most flexible man I’ve ever known.”

Brinker is the founder and CEO of One Community USA, which was previously titled Operation Blue Shield. The mission for the organization reads,

“Our comprehensive cause-minded community engagement programs unite, raise awareness and foster positive relationships between first responders and citizens living in the communities they serve and protect. Our programs address needs in education, health, second chance opportunities, civic engagement, safety and citizen advocacy and are the building blocks to creating safe, secure neighborhoods leading to economic growth and a stronger America.”

2. Madeleine Pickens Is a Business Woman & Philanthropist, as Well as a Thoroughbred Racehorse Owner & Breeder

Madeleine Pickens is Pickens’ fourth wife. They were married from 2005-2013. Pickens is a lifelong equestrian, having owned several famous racehorses throughout her life. Madeleine was notably born in Iraq; her father was a British oil executive, so her family was stationed in the area, per a bio of Madeleine in the Sound Horse Conference.

Boone originally met Madeleine during a luncheon in Kentucky, according to a profile of their marriage in Texas Monthly.When he proposed, he offered her a heart-shaped diamond that was the “size of a bomb,” per the publication.” Pickens said to Texas Monthly, “I knew Madeleine already had some big jewelry, but I wasn’t going to be out-ringed.”

Per the publication, the couple tried for a period of time to have children. Madeleine and Pickens both acknowledged this effort in 2005, with Madeleine telling the publication, “Yes, we’re working very hard to have one. We’re trying every night.” They did not ending up having any children throughout their seven-year marriage.

Nelda Cain married Pickens in 2000, when she was 52 years old and he was in his early seventies. Nelda is a singer, and released a CD earlier in her life called Raising Cain; Cain is her maiden name. Per D Magazine, her voice has been compared to that of Patsy Cline.

Cain is notable in the Dallas area: she was the dinner chair at an event that honored Dallas Attorney Don Glendenning with a humanitarian award in 2012, per The Dallas News.

According to his obituary, Pickens leaves behind 11 grandchildren and “an increasing number of great-grandchildren.”

One of Pickens’ grandchildren, Thomas “Ty” Boone Pickens, died prior to him, of a heroin overdose in 2013. He was a student at Texas Christian University at the time of his death.

5. Pickens’ Net Worth Is in the Billions, Per Several Estimates

Pickens was worth an estimated $1.2 billion in 2013, according to a report from Forbes a few years back. More recent estimates put his net worth closer to $3 billion.  Given Pickens’ net worth, it’s likely that there will be speculation over who of his five ex-wives, five children, and 11 grandchildren will be mentioned in the will.

Pickens often poked fun at his rankings related to the Forbes billionaires list. In 2013, when he fell off the list, he tweeted in response to someone who claimed he was no longer a billionaire, “.@darrenrovell Don’t worry. At $950 million, I’m doing fine. Funny, my $1 billion charitable giving exceeds my net worth. @Forbes @RMac18″

Pickens was a notable philanthropist, particularly on behalf of his alma mater, Oklahoma State University. The billionaire donated $500 million to the university in 2014, with $165 million set aside for the athletic department.

In 2014, Pickens made another wry joke about his net worth, telling Forbes, “My timing hasn’t been perfect. I’ve lost two billion, given away one and I’ve got one left.”

READ NEXT: T. Boone Pickens’ Net Worth: 5 Fast Facts You Need to Know

Loading more stories
wpDiscuz
0
0
Would love your thoughts, please comment.x
()
x
| Reply
T. Boone Pickens had five wives over the course of his life, though he was single at the time of his death. His wives were Toni Brinker, Madeleine Pickens, Beatrice Carr, Lynn O'Brien, and Nelda Cain.