Almost a year after his death, Elijah McClain is making headlines. The 23-year-old unarmed Black man died in 2019 after having contact with Aurora Police Department officers in Colorado, according to the Global Dispatch. Following the deaths of unarmed Black men George Floyd and Rayshard Brooks, more than 2 million people signed a petition calling for the officers involved in his case — Nathan Woodyard, Jason Rosenblatt and Randy Roedema — to be taken off duty and for the incident to be thoroughly investigated.

According to Patch, on the night of August 24, 2019, McClain was walking home from a local convenience store wearing a ski mask due to having anemia and getting cold easily. Someone called 911 to report a “suspicious man,” and when police officers arrived, they told McClain to stop. He refused and told the officers, “I have a right to go where I am going,” police body camera video shows. When the officers approached to physically stop him, McClain said, “I am going home. … Leave me alone,” and “Let me go. No, let me go. I am an introvert. Please respect my boundaries that I am speaking.” Police then put him into a chokehold for 15 minutes. Paramedics were called to assist the police and injected McClain with ketamine to sedate him. On the way to the hospital, he had a heart attack and went a coma, Patch reported. His family removed him from life support on August 30 after he was declared brain dead, The Cut reported. The officers involved are still employed with the department and were never criminally charged.

Here’s what you need to know about McClain’s death:

1. McClain Said He Couldn’t Breathe While Being Restrained

Body Worn Camera Regarding the In-Custody Death of Elijah McClainThis is the Body Worn Camera footage from the August 24, 2019 contact with Elijah McClain. After a struggle Mr. McClain was transported to a local area hospital. Upon arrival at the hospital he was admitted and subsequently placed on life support. Sadly, several days later Mr. McClain was taken off life support. This content…2019-11-23T02:08:25Z

The bodycam video was uploaded to the Aurora Police Department’s YouTube page in November 2019. In the video, McClain can be heard pleading with police to not be so violent with him. At one point, he says, “I can’t breathe,” similar to Floyd and Eric Garner. During their struggle, the officer’s bodycam appears to be knocked off, but McClain can be heard saying, “Ouch, that really hurts,” “I’m so sorry” and “I don’t have a gun. I don’t do that stuff.” McClain also vomited several times while in police custody.

2. A Change.org Petition Seeking a Thorough Investigation Has Over 2.2 Million Signatures

A Change.org petition calls for the officers involved in his death to be taken off duty and for the entire incident to be investigated again independently. According to the petition, the officers used excessive force unnecessarily.

“He is laying on the ground vomiting, he is begging, he is saying, ‘I can’t breathe,’” says a quote from the family’s lawyer, Mari Newman, on the petition page. The quote continues, “One of the officers says, ‘Don’t move again. If you move again, I’m calling in a dog to bite you.’”

Adams County District Attorney Dave Young found that Woodyard, Rosenblatt and Roedema should not face criminal charges after an investigation in November 2019, the Denver Post reported.

“From the officers’ perception, it went from an investigatory stop to a potential life-threatening incident, and it certainly raised the officers’ use of force,” Young wrote in a letter to Aurora Police Chief Nick Metz. “Under the circumstances of this investigation, it is improbable for the prosecution to prove cause of death beyond a reasonable doubt to a jury. … Consequently, the evidence does not support the prosecution of a homicide.”

The petitioners hope to get 3 million signatures in total.

What exactly is a chokehold?Martin Savidge spends the day finding out what a chokehold is and why police use it. More from CNN at cnn.com/ To license this and other CNN/HLN content, visit collection.cnn.com/ or e-mail cnn.imagesource@turner.com.2014-12-05T03:44:01Z

On June 9, Aurora’s Interim Police Chief Vanessa Wilson ordered a ban on the chokeholds, the Sentinel Colorado reported. However, the Aurora City Council also “introduced a city ordinance that would codify a ban on the use of chokeholds and carotid control holds by Aurora police,” the Sentinel reported.

Councilperson Juan Marcano said he felt it was crucial to put together a code of rules regarding the use of the carotid pressure ban to ensure its impact.

“While we appreciate her moving on this, we feel it is important to codify these bans so they cannot be rolled back by a change in department leadership and so that our community knows where council stands on the matter,” he said. The city held a virtual town hall meeting on June 23 to consider four finalist candidates for police chief, according to 9News.

4. A Former Police Officer Was Hired to Investigate McClain’s Death & Was Fired a Day Later

One day after Aurora City Manager Jim Twombly announced on June 9, 2020, that attorney Eric Daigle was hired to investigate McClain’s death, Daigle was let go. The Denver Post reported that city councilmembers were concerned about Daigle conducting the investigation because he is a former Connecticut police officer.

“I hear and understand Council’s concerns—as well as the community’s—about the individual that was hired to conduct the review,” Twombly said in a statement on June 10. “Therefore, I have canceled Mr. Daigle’s contract and will be meeting with the Council as soon as possible to determine our next steps initiating a new review.”

Twombly had hired Daigle without the knowledge of the McClain family, the city council or taxpayers, the Denver Post reported.

Review of the Elijah McClain Case

The selection of the investigator to conduct an external review of the Elijah McClain case was decided earlier by the City Manager, that contract has been terminated and another individual will be selected by the Mayor and the City Council. 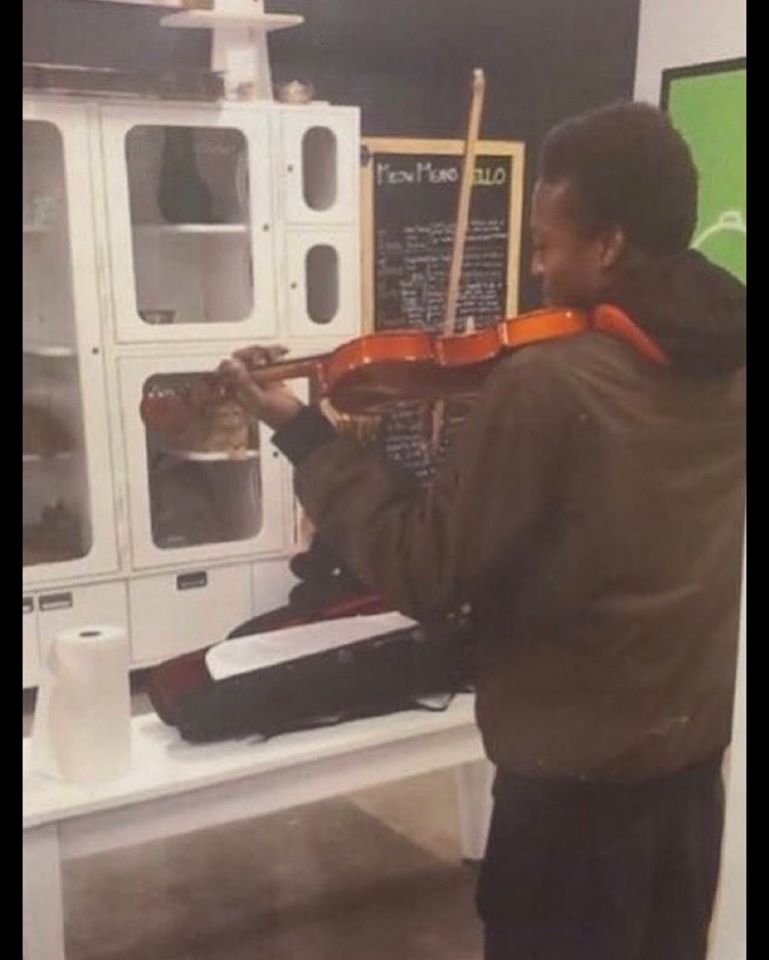 ColoradoMusic.OrgMcClain playing the violin at an animal shelter.

On his lunch break from his job as a massage therapist, McClain would visit a nearby animal shelter and play his violin for the animals. According to Colorado Music, he played music for them because he thought they were lonely and the music would calm them.