For months now, lawmakers in Congress have been unable to reach a compromise that would allow a second round of stimulus payments. With negotiations stalled yet again, President Donald Trump took to Twitter to lambast the Democrat leaders, accusing them of being “heartless,” and calling for Republicans to find a way to deliver “much higher numbers” to the American people.

Trump tweeted, “Democrats are ‘heartless.’ They don’t want to give STIMULUS PAYMENTS to people who desperately need the money, and whose fault it was NOT that the plague came in from China. Go for the much higher numbers, Republicans, it all comes back to the USA anyway (one way or another!).”

Trump Calls for ‘Higher’ Numbers for Stimulus Payments, Leading to a Rare Show of Support From Nancy Pelosi

Democrats are “heartless”. They don’t want to give STIMULUS PAYMENTS to people who desperately need the money, and whose fault it was NOT that the plague came in from China. Go for the much higher numbers, Republicans, it all comes back to the USA anyway (one way or another!).

Trump has repeatedly called for a second round of stimulus payments throughout the summer. However, his administration has been unable to make that happen, due to ongoing disagreements between the White House and Congress, as well as disagreements and failures in negotiation between Democrat and Republican lawmakers.

This isn’t the first time Trump has criticized Democrats so directly for the impasse in negotiations over a second round of payments. In August, Trump said in an interview after another stall of negotiations, “It’s [the Democrats’] fault. They want $3.5 billion for something that will turn out to be fraudulent—that’s election money, basically.”

On the other side of the aisle, Democrat leaders have called out Republicans with the same accusation of being unable to compromise. On Wednesday, though, they seemed to applaud Trump’s tweet, encouraging Senate and House Republicans to heed his message. In a joint statement, House Speaker Nancy Pelosi and Senate Majority Leader Chuck Schumer said,

“We are encouraged that after months of the Senate Republicans insisting on shortchanging the massive needs of the American people, President Trump is now calling on Republicans to ‘go for the much higher numbers’ in the next coronavirus relief package. We look forward to hearing from the President’s negotiators that they will finally meet us halfway with a bill that is equal to the massive health and economic crises gripping our nation.” 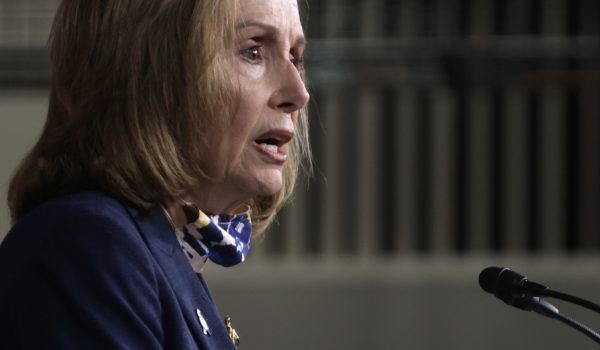 On Tuesday, Pelosi told members of her caucus that she wanted the House to remain in session until a compromise was reached on the next stimulus package, CBS News reports. In an interview with CNBC, Pelosi said, “I just got off the call with my colleagues. We are committed to staying here until we have an agreement, an agreement that meets the needs of the American people.”

At the same time, Pelosi has been less than friendly towards another stimulus proposal brought forth by a bipartisan group in Congress. The proposal, which came from members of the bipartisan House Problem Solvers Caucus, would provide the American economy with approximately $1.5 trillion in funding, including another round of stimulus checks.

A group of Democrat lawmakers, including Pelosi, quickly denounced the proposal. In a statement released by the House Committee on Appropriations, the lawmakers said the new proposal “falls short of what is needed to save lives and boost the economy.” The statement continued, “Unfortunately, today’s proposal retreats from these critical policies and fails to respond to additional issues that have emerged since May. When it comes to bolstering the public health system, supporting state and local governments, and assisting struggling families, the Problem Solvers’ proposal leaves too many needs unmet.”

Rep. Max Rose, a freshman Democrat, voiced his frustration with the behavior by the Democrat leaders following this statement. He told CNN, “You saw all the reasons [today] why people hate politics. Because they are rejecting a bold bipartisan measure outright and insinuating things are not in there when they actually are and just continuing to kick the can down the road over and over and over again. … It’s deeply frustrating.”

READ NEXT: Will a Stimulus Check Come Before the Presidential Election?

Loading more stories
wpDiscuz
0
0
Would love your thoughts, please comment.x
()
x
| Reply
Trump attacked Democrats in Congress in a tweet about the need for more stimulus payments on Wednesday.