Elizabeth Sullivan was last seen on October 13, 2014, near San Diego’s Liberty Station, where she lived with her husband, Matthew Sullivan, and their two children. The next day, she was reported missing. Authorities, family members and friends searched for the missing mother, but the trail soon grew cold.

Nearly two years later, on October 6, 2016, the search for Sullivan came to a sad conclusion after her decomposing body was found floating in San Diego Bay. According to NBC San Diego, the San Diego District Attorney’s Office said it appeared as though her body had been “hidden somewhere” before being dumped in the bay.

Matthew Sullivan called 911 to report his wife’s disappearance, and NBC San Diego wrote that he said on the 911 call she was “going to frame him and have him arrested” and she “made a mess of the bedroom and took photos.” That 911 call wasn’t the first time the Sullivans contacted the authorities; Elizabeth Sullivan called emergency services six months prior during an argument, the TV station reported.

On that call in March 2014, she told police officers there was a history of domestic violence and they were arguing about custody of their children and child support. Sullivan also told authorities at the time that she was concerned the situation might escalate.

Sullivan had been having an affair, which her husband found out about just a month before she vanished, Fox23 reported. According to the outlet, Elizabeth Sullivan had met a man on a dating site but didn’t tell him she was married or had kids.

A friend of her new boyfriend saw the child safety seats in her vehicle and called Child Protective Services thinking she was leaving her kids home alone. The ensuing investigation led Matthew Sullivan to find out about the affair, the outlet reported.

Elizabeth Sullivan met with a divorce lawyer on October 13, 2014, and texted a friend later that night, which would be the last time anyone saw her or heard from her, Fox23 reported. She didn’t show up to her lawyer’s office for their appointment the following day, and her friend reported her missing.

Her Decomposing Body Was Found 2 Years Later, the Same Day Matthew Sullivan Was Moving Out of His Home

Matthew Sullivan told PEOPLE magazine a month after his wife’s disappearance that, “I’m running on fumes right now. I don’t know where to look. I’m always looking around the neighborhood, trying to catch a glimpse of her. Even if I got a phone call saying she’s OK, it would put my mind at rest. But nothing at this point.”

Two years after her disappearance, Sullivan’s body was found floating in San Diego Bay. An autopsy showed she’d been stabbed several times, and her nose and jaw had been broken, Fox23 reported. Prosecutors believe Sullivan’s body had been stored in a freezer in the home’s garage, and that Matthew Sullivan dumped his wife’s body in the bay as he prepared for a cross-country move, the outlet reported. The same day her body was found in the bay, Matthew Sullivan and his new girlfriend were moving from San Diego to Maryland, prosecutors argued, with the two Sullivan daughters and his new baby.

Authorities searched the house in greater detail and found evidence of blood under the carpet in Sullivan’s bedroom and a bloodstained knife hidden in the attic, the San Diego Union-Tribune reported. However, authorities weren’t able to link Matthew Sullivan to his wife’s murder for about a year and a half.

Matthew Sullivan denied being involved in his wife’s death and said the blood in the bedroom was there because his wife had been cutting herself over the Child Protective Services investigation. He said he found her bleeding and dressed her wound, and agreed to her request not to call emergency services, Fox23 wrote.

In January 2018, authorities had built up their case and arrested Matthew Sullivan in Delaware, charging him with the murder of his wife and extraditing him to San Diego. His trial began on February 21, 2020, and he was ultimately found guilty of killing his wife. 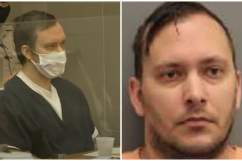