Joe Rogan slammed right-wingers for “canceling” Black Rifle Coffee in reaction to a New York Times article in which the veteran-owned company’s leaders tried to distance themselves from extremists who have latched on to the pro-gun coffee brand over the years. Rogan, speaking on the Joe Rogan Experience podcast posted on Spotify on Friday, August 6, 2021, with Black Rifle Coffee CEO Evan Hafer, said he thought it was “so weird to see cancel culture come from the right.”

Rogan told Hafer, “When people were attacking you I got butthurt. I was like, ‘Come on? Evan?’ Get the f*** out of here.’ I was like, I’ve got to have you on. It was so weird to see cancel culture come from the right. I didn’t know it worked that way. I didn’t know you f****** idiots would do the same thing. What is going on?”

Some of Hafer’s comments in the article led to backlash from conservatives, especially the far right. Hafer, in the July 2021 Times article titled “Can the Black Rifle Coffee Company Become the Starbucks of the Right?,” said, he doesn’t belong to a party, adding, “What I figured out the last couple of years is that being really political, in the sense of backing an individual politician or any individual party, is really [expletive] detrimental. And it’s detrimental to the company. And it’s detrimental, ultimately, to my mission.” Hafer also told the newspaper, “The racism [expletive] really pisses me off. I hate racist, Proud Boy-ish people. Like, I’ll pay them to leave my customer base. I would gladly chop all of those people out of my [expletive] customer database and pay them to get the [expletive] out.”

Hafer, a retired Army Green Beret, founded Black Rifle Coffee Company in Salt Lake City, Utah, in 2014. According to its website, “Black Rifle Coffee Company is a veteran-owned coffee company serving premium coffee to people who love America. We develop our explosive roast profiles with the same mission focus we learned as military members serving this great country and are committed to supporting veterans, law enforcement, and first responders. With every purchase you make, we give back.”

Rogan told Hafer during the JRE podcast episode #1693, about the reaction to the Times article, “It didn’t even make sense. It made no sense. It was the weirdest dog pile I’ve ever watched.” Hafer responded, “You know, I’ve tried to figure it out. And I haven’t really spent a ton of time on it, because honestly, I’ve got better s*** to do in my life than figure out what anonymous accounts and Twitter is saying about me. But I think there’s such a mistrust with mainstream media and that’s bred this hyper-divisive gaslighting on both sides.”

Hafer added, “And I think conservatives at times are also looking for the conspiracy inside the party. So they kind of spin themselves up a little bit. But it was such a strange scenario for me to be in. Because I think I’ve been so open for seven years as like, who we are, what we do, I haven’t really held anything back. So I think it’s a combination of things going on. People are super pissed off, the pandemic has been a complete s***show, you’ve got a mistrust in the government. You’ve got a mistrust in mainstream media and you’re looking for the boogeyman. And, I mean, it’s crazy to see misinformation being put out about yourself.”

Rogan asked Hafer, “Did it start with the New York Times article? The New York Times article was like, ‘Black Rifle Coffee is the Starbucks of the right,’ is that how they described it?” Hafer said, “Can they be,” and Rogan asked, “What was the negative part of that?” Hafer said, “To rewind, we knew this story was going down months before. I was down in Florida, I was bass fishing with Johnny Morris, who owns Bass Pro Shops and Cabela’s … It was me, my business partner Mat, and we get a call, ‘Hey the Times is doing an article on you guys, do you guys want to sit for the interview?’ And we were like f*** you, no.”

Hafer said but then he and his business partner, Mat Best, and others at the company talked about it and looked at other articles by the Times. He said, “I think if they’re going to do this story I’m at least going to give them the opportunity to be objective and then really take a look at the company from the inside. I had no illusions as to what type of position they might take or how they might misrepresent the company. At least I’ll give them the opportunity.” He said they debated it and decided to invite the Times to come to an event for veterans the company puts on.

“I felt it would be the ethically correct thing for me to do for the company and for the people there to tell their side of the story,” Hafer told Rogan. “I didn’t have any illusions as to whether or not they were going to paint the company in a certain light. But I did feel it was really important to do that. I don’t think that pulled through. There were a lot of things that didn’t pull through in the article that I would have loved to have had in the article, but they didn’t. I’m not riding it. That’s the way the journalist views the world. I was surprised to see all the kickback from conservatives, because I now all of a sudden conservatives are reading and believing the New York Times?”

Hafer said he didn’t agree with the tone of the article. “They already had a narrative based on their readership and the way that they view the world that this is the way they wanted to view the company,” he said.

Hafer added, “The Black Rifle brand is a symbol of service, of strength, and of goodness that has carried over from our military origins. It’s why we support active duty service members and veterans, prioritize veteran hiring, and advocate for individual liberty and personal responsibility. We do not support legal advocacy efforts. We do not sponsor nor do we have a relationship with the 17-year-old facing charges in Kenosha, WI. We believe in the integrity of the legal justice system, and support law enforcement officials. We’re grateful for the continued support of the Black Rifle Coffee community and eager to continue serving those who serve.”

Best, the company’s executive vice president, told The New York Times, “Every brand, name the brand, it was probably there: Walmart jeans, Nike shoes. And then it’s like one patch from our company. There’s certain terrorist organizations that wear American brands when they go behead Americans. Do you think they want to be a part of that? And I’m not drawing a parallel between the two. I’m just simply saying there are things in business, when you grow, that are completely outside your control.” 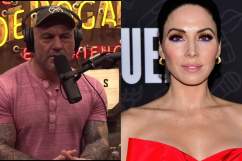 Whitney Cummings on Cancel Culture: ‘When Did Comedians Become Heroes?’

Loading more stories
wpDiscuz
0
0
Would love your thoughts, please comment.x
()
x
| Reply
Joe Rogan told Black Rifle Coffee CEO he thinks it is "so weird to see cancel culture from the right" while blasting the response to a New York Times piece about the company.