TikTok TikTok users recreated the infamous Rice Purity Test for the modern era with the new The Innocence Test.

The Rice Purity test is a classic innocence survey created in the 1980s by students at Rice University in Houston, Texas. The Innocence Test is a new quiz created by two TikTok users from Oregon, Grace Wetsel (aka @50_shades_of_grace) and Ella Menashe (aka @ellemn0), who decided to update the Rice Purity Test for the modern era.

The original version of the purity test had already become popular during the COVID-19 pandemic on social media, and the new version quickly blew up, with the video posted on TikTok by Wetsel and Menashe racking up more than 3 million views just one day after it was posted on December 28. The test became so popular that the college-student creators made a new website for it. You can take the test here, at theinnocencetest.com.

Like the Rice Purity Test, The Innocence Test asks questions about sex, drugs, relationships, run-ins with the law, lying and other supposed vices. After calculating your score, the test website will evaluate your results, and give you a quippy response, calling you something like a “baddie,” “rebel,” “corrupt,” “heathen,” “angel” or “sweetheart,” depending on how innocent your answers make you out to be. The results range from 0 percent, most innocent, to 100 percent, least innocent. 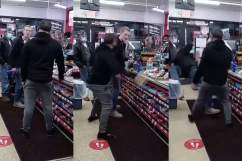 WATCH: Twisted Tea Can Smashed Into Head of Man Who Used N-Word at Circle K

On The Innocence Test website, Wetsel and Menashe wrote, “fun fact (actually really really sad fact), the Rice Purity Test was made in the 80s. that means that it includes none of the quintessential 21st century rebellious activities (think sexting, fake IDs and tinder). welcome to two best friends’ re-imagining of the classic purity test, we hope you have as much fun as we did.”

The Innocence Test is made up of 100 questions and includes topics that weren’t even an idea in someone’s head in the 1980s when the Rice Purity Test was created, like questions about dating apps, whether you’ve ever sexted with someone or if you’ve used Snapchat to stalk someone’s location. Because it’s 2020, the survey of course includes the question of whether you’ve had COVID-19, asking if you’ve “had corona! 😷” Test takers can check off all the things they’ve done in their life, and then the website will calculate the user’s score.

welcome to: the innocence test✨ link in both of our bios!!! @50shades_of_grace #fyp #foryou #foryoupage #innocence #ricepurity #test #CozyAtHome

Other questions on The Innocence Test were carried over from the classic Rice Purity Test, like whether you’ve given or received a hickey, showered with a MPS (member of the preferred sex), been drunk, gone streaking, had the police called on you, had sex, etc.

Innocence Surveys Have Been Popular on College Campuses for Decades, & the 1980s Version by Students at Rice University Spawned Several Other Purity Tests

Innocence surveys like the Rice Purity Test have been popular for decades. According to The Sun, the 1980s version created by students at Rice was even one of the first viral internet memes, before that was even a phrase used in the culture. The Sun wrote in October, “It used to be voluntarily tested by new students to aid bonding with other similar students. Online purity tests were among the earliest of internet memes, popular on Usenet beginning in the early 1980s.”

According to The Sun, the idea dates back even further, with Columbia University producing a survey in 1935 in the humor magazine “The Jester” that asked similar questions. Others have modified or recreated the purity test over the years, like one made by students at Brown University that adds in new questions and is called the Brown + Rice Purity Test, or a 2016 version by BuzzFeed that became a popular trend at the time. It is also similar to the popular game of “Never Have I Ever.”

According to the Rice Purity Test website, “The Purity Test has historically served as a segue from O-week to true college life at Rice. It’s a voluntary opportunity for O-week groups to bond, and for students to track the maturation
of their experiences throughout college.” The website adds in bold, “Caution: This is not a bucket list. Completion of all items on this test will likely result in death.”

The two creators of The Innocence Test said in a December 29 TikTok video that they didn’t expect it to go viral like it did, saying they hoped “at least 40 people would take The Innocence Test.” But it had more than 1.3 people responses in under 24 hours, they said.

“We made it its own website, so go take that one,” Wetsel said in a new video. Thousands of TikTok users have responded to their videos revealing their own scores and responding to the test, and laughing at the quippy titles the test website churns out for those who take it.

Wetsel, who now has more than 25,000 followers on TikTok, jokes in her profile she was previously best known because “Barstool reposted me once.” Wetsel is a writer for the campus food website Spoon University, where she says in her bio, “am a neuroscience major and a Spanish minor at Emory University. Other than food, my passions include photography, music, skiing, and anything involving the ocean.”

Wetsel grew up in Oregon before attending Emory, which is in Atlanta, Georgia. Menashe is also from Portland, Oregon.

Loading more stories
wpDiscuz
0
0
Would love your thoughts, please comment.x
()
x
| Reply
The Innocence Test is an updated version of the classic "Rice Purity Test" for the modern age, created by TikTok users @50_shades_of_grace and @ellemn0.