Trashelle Odom is an Idaho woman and wife of Trump donor and construction company executive John Odom. She accused former Trump aide Corey Lewandowski of making unwanted sexual advances and groping her inappropriately. Lewandowski was removed from his position running a pro-Trump super PAC after Odom came forward with the accusations against him on September 29, 2021.

The 32-year-old Odom told Politico the incident occurred at a charity event in Las Vegas on September 26, the political news site reports. Odom told Politico that the 48-year-old Lewandowski, who is married with children, “stalked” her at the event. Politico reports firsthand witnesses corroborated Odom’s accusations.

Trashelle Odom said in a statement, “On the evening of September 26 in Las Vegas, Nevada, I attended a dinner to support a charity and spend time with wonderful friends. He repeatedly touched me inappropriately, said vile and disgusting things to me, stalked me, and made me feel violated and fearful. I am coming forward because he needs to be held accountable. I am blessed to have a loving husband and family behind me. I want other women to know that you can be heard, too, and together we can stop terrible things like this from happening.”

Lewandowski’s attorney, David Chesnoff, told Politico, “Accusations and rumors appear to be morphing by the minute and we will not dignify them with a further response.” But the former Trump campaign manager was removed from his position at the helm of Make America Great Again Action, The New York Times reports. A spokesperson for Trump, Taylor Budowich, told The Times, “Corey Lewandowski will be going on to other endeavors and we very much want to thank him for his service. He will no longer be associated with Trump World.”

Here’s what you need to know about Trashelle Odom and her accusations against Corey Lewandowski:

1. Trashelle Odom Said Lewandowski Touched Her Leg & Butt Repeatedly, Told Her She Had a ‘Nice Ass’ & Threw a Drink at Her When She Turned Down His Advances, Adding That She Feared for Her Safety

According to Politico, Trashelle Odom said in her statement that the incident occurred while she and her husband were attending an event with other Republican donors at the Westgate Las Vegas Resort & Casino’s Benihana restaurant on Sunday, September 26, 2021. She said in her statement that she was sitting next to Lewandowski. The event was to support Victoria’s Voice Foundation, a charity that combats substance abuse. Trashelle Odom said in a statement that Lewandowski remarked about the size of his genitalia and described his sexual performance and showed her his hotel room key. “After the incident, Odom told people that Lewandowski repeatedly spoke about sex while using expletives,” Politico wrote.

The Odoms’ attorney said in the statement, “Mrs. Odom stated that over the course of the dinner, Mr. Lewandowski tried to hold her hand, and she pushed his hand away. He touched her leg, and she moved it away. He grabbed her napkin off her lap and tried to touch her leg again, and she pulled her dress over her leg, to move his hand away and cover her skin. He touched her back and she tried to get away. He described an area where he was sore from a workout, on the side of his butt, but he demonstrated this by touching her there—on the upper side of her rear end. Lewandowski tried to touch her approximately 10 times, and Mrs. Odom always rebuffed him.”

According to the statement, Odom left the room and Lewandowski followed her, telling her she has a “nice ass” and then “threw his drink” at her. She said it landed on her shoe and dress. The former Trump aide also “called her stupid,” Politico reports. Her attorney said Lewandowski told Trashelle he is “very powerful and can destroy anyone” and that he is close to Trump and can “get anyone elected or can take anyone out.” According to Politico, other attendees at the dinner said Lewandowski appeared to be intoxicated, and a photo reviewed by the news site showed Lewandowski above Odom’s right shoulder with his tongue sticking out.

Odom said in the statement to Politico, “Corey was verbally and physically aggressive and forceful. I was fearful for my physical safety. I was also fearful that Corey has the power to destroy and ruin everything my husband and I have been working on in our business, personal and charitable endeavors.”

2. Trashelle Odom, Who Has Been Married to John Odom Since 2017, Says on Instagram She Is a ‘Proud Mother of 5 & Wife’

On her Instagram page, which is set to private, Trashelle Odom says, in the bio “I’m a proud mother of 5 and wife. We love to travel make memories❤️ 💍.” Her Instagram profile features a photo of her with her husband, John Odom. The couple lives in Meridian, Idaho.

Trashelle Odom has been involved in her husband’s business, HMH Construction, since 2015, according to business records. The company is based in Nampa, Idaho. She was then known as Trashelle McGregor and has also been known as Trashelle Power, public records show. The HMH Construction website says, “John Odom has worked in the Excavation & Construction industry for 20 + years, gaining experience in all things concrete, construction, excavation, utilities, and development. Being a Native of Idaho, born in Twin Falls, he is extremely passionate about growth in the Treasure Valley and being a part of the huge boom in Housing Developments.”

The site, which features several photos of Trashelle and John Odom, adds it is a “family focused” company, “Outside of the office, John enjoys raising his family which includes 5 kids! Ranging from 1 to 19 years old. He is non-stop, he loves to work being on site some days moving equipment or staking areas by 5am before his crews have even arrived. He visits all projects throughout the day, ensuring things are running smoothly. He is not afraid to get dirty to get things done, and he is the farthest thing from a procrastinator. Beneath John’s 6’4″ stance is a heart of gold. He is over the top and gregarious, and you wouldn’t want him any other way!”

3. Odom & Her Husband Run a Family Racing Company, Odom Racing, Along With Their Construction Company

Along with the construction business, Trashelle and John Odom are also involved in a racing company, Odom Racing. On her Instagram, Trashelle wrote in the bio, “We are a racing family.”

The Odom Racing website says, “Odom Racing started out as just John Odom racing all over the country and just like all of us with a passion he was determained to be the best. Along the way Trashelle Odom started to race alongside Hudson Odom. While we travel the country we have met wonderful people along the way and we happened to sponsor a few of them including Bridget Burgess and Mac Brosnan. We would love to show you more just follow us on our journey.”

The racing company’s Instagram page shows several photos of Trashelle Odom at events and modeling merchandise the company sells. They also have a YouTube channel where they document their adventures as a family.

In a YouTube Q&A video, Trashelle Odom said, “I did not grow up with any money. So I just thought that having any car that actually drove would be great. I’m not kidding, I was like, ‘Why does anyone complain when a car actually runs and gets you somewhere, point a to point b.’ I just thought having a car would be nice. I had to work my butt off to get my first car. … Everything is better than I thought. I had lots of dreams of what I wanted in life. But more the kind of man I wanted to be with, how I wanted to raise my kids, all kinds of different things. 100% it’s so much better. I never really thought I could have that. I never really thought that I could have a man that treats me like a queen, he works all day and we go on trips and all these things are amazing. Our kids are everything. Everything that we have is definitely nice, but it doesn’t compare to my family life. It’s just way better than I ever imagined.” 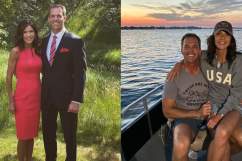 4. The Odoms Have Donated $100,000 to the Pro-Trump Super PAC Lewandowski Was Running, Politico Reports

The Odoms are “relative newcomers to the Republican donor scene” and gave $100,000 to the pro-Trump super PAC that Lewandowski was running, according to Politico. Federal Election Commission records show the Odoms’ construction company, HMH Construction LLC, contributed $60,000 to the PAC in June 2021. The FEC records show contributions made to the MAGA Action PAC up until August 2021.

John Odom posted a photo he and his wife took with Trump at CPAC in July 2021. Odom wrote on Facebook, “Anyone that knows me knows how much I love this country, President Trump and this great state we live in. I had the opportunity to meet President Trump and so many other patriots at CPAC earlier this month. This wasn’t just a photo op but a roundtable with President Trump, Louisiana Attorney General Jeff Landry, Mike Lindell, SD Governor Kristi Noem, Stephen Miller, Dave McIntosh of Club for Growth and a few others you would recognize from TV.”

John Odom added, “In the meeting the President and I were talking about Idaho, developing real estate and the need for real leadership in our great country and around the world. It was so incredible to sit and talk to President Trump! After the roundtable the President addressed CPAC where I was right up front cheering him and our country on. At the conclusion of his remarks and with a room full of great patriots I was taken aback with incredible gratitude. I come humble beginnings, as a young man i made some incorrect choices but only in America can a person truly change themselves and their circumstances. I thank God everyday for my blessings of an incredible family, friends and career. I am truly an only in America story.”

In a statement, John Odom said about the incident with Lewandowski, “I love my wife, and I want accountability now.” He added that they are “exploring our legal options at this time” and want to “make sure” that Lewandowski “cannot harm anyone else.” It was not immediately clear if Odom planned to explore a criminal investigation or possible civil action against Lewandowski. According to Politico, Trashelle Odom
attended the dinner with her sister and stepson. The Odoms threatened to demand a full refund of their contributions if Lewandowski was not removed from the PAC, according to The Daily Beast.

Lewandowski was previously accused of slapping the buttocks of pro-Trump singer Joy Villa in 2017. She filed a police report after the incident at the Trump International Hotel in Washington, D.C., but no charges were filed, according to CNN. Lewandowski was charged with battery in 2016 during Trump’s first presidential campaign. He was accused of grabbing reporter Michelle Fields at a campaign event. Fields was working for the right-wing website Breitbart at the time. Palm Beach County State Attorney Dave Aronberg later declined to prosecute Lewandowski in that case, according to NBC News.

Trump spokesman Taylor Budowich tweeted, “Pam Bondi, the very talented and honorable frmr AG of FL, has our complete faith and confidence in taking over MAGA Action. Corey Lewandowski will be going on to other endeavors and we very much want to thank him for his service. He will no longer be associated with Trump World.”