YouTube has appeared to crash, as of Wednesday evening. Early in the evening, eastern time, the site began having issues with video loading, causing thousands of people to flood to Twitter to see what the problem was.

According to Down Detector, users began reporting issues at 7:13 p.m., eastern time. Users are still reporting issues with the web and mobile versions of YouTube.com, specifically with loading videos. Ads also don’t appear to be loading. Instead, many users are faced with the swirling indication that the video is loading or buffering, for minutes on end.

The official Team YouTube Twitter account provided the following update at 7:23 p.m.: “If you’re having trouble watching videos on YouTube right now, you’re not alone – our team is aware of the issue and working on a fix. We’ll follow up here with any updates.”
Forty-plus minutes later, the issue still has not been resolved.
Many users did take the opportunity to make some requests of YouTube, though, including one bold user who replied to the Team YouTube tweet, “premium subscribers definitely deserve a free month for this, just saying”

It’s become something of a ritual for users of any social media network or web platform to turn to Twitter, if the platform in question isn’t working. Such was the case on Wednesday evening, as tens of thousands of people took to Twitter to see if others were having the same issues they were experiencing on YouTube.

“It’s fascinating how this is happening worldwide…” one person tweeted.

The chief issue reported by users was a failure for videos to load. For some, those videos did finally start playing after taking an abnormally long time to load.

One person wrote, “youtube went down for like 15 mimutes so i left my comp loading so i can lay resting while i wait and i nearly sh*t myself when sh*t finally loadef bc it startled me”

Outages Have Been Reported on Both Coasts of the United States, as Well as in Europe & South America 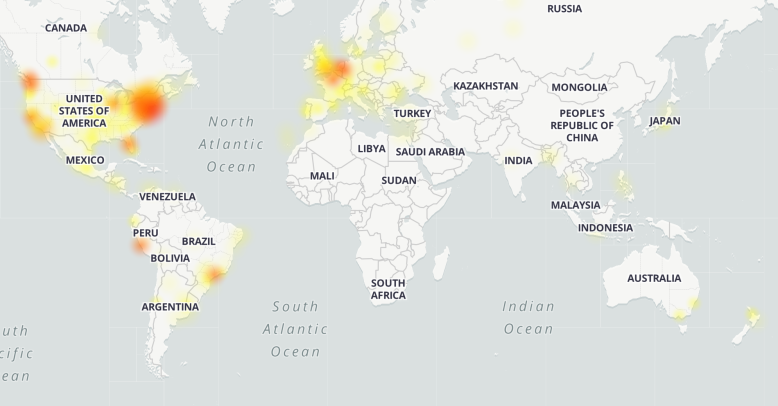 Down Detector’s live outage map shows where the majority of the issues were reported. Down Detector also reported that approximately 95% of the issues reported have to do with videos not loading. Ads also aren’t loading properly.

Another person asked, “How does YouTube even go down? Google has all these back up servers and sh*t to ensure that shouldn’t really be possible lol”

Loading more stories
wpDiscuz
0
0
Would love your thoughts, please comment.x
()
x
| Reply
YouTube was down for a while on Wednesday afternoon. Here's the latest YouTube update.