The fidget spinners come in black and have PewDiePie’s brofist logo in the center. They’re made of metal and are 3 by 3 inches. The description simply reads “Yes, the PewDiePie Fidget Spinner is now a thing!” There’s a 30 day return policy and global shipping.

The fidget spinners are being sold on Fanfiber, a distributor based in Amsterdam that focuses on fan-based merchandise.

https://t.co/1uZv3qIf0j
EVERYONE HAS BEEN ASKING FOR THIS, LEGIT EVERYONE WANTED ONE SO…

PewDiePie is the most subscribed YouTuber in the world, gaining monstrous popularity for his Let’s-Play videos and his skits. At the time of writing, he has over 55,200,000 subscribers and over 15,300,000,000 views on his YouTube channel since joining on April 29, 2010. His Twitter account has over 9.98 million followers with his Facebook page granting him an additional 7,300,000 followers.

Fidget spinners, whose invention is credited to Catherine Hettinger in 1997, has taken the world by storm. Thousands of videos have appeared online, including the video below which has over six million views.

The toy is advertised to help with disorders such as sutism, PTSD, and ADHD but they currently have not been evaluated in proper research said Clinical Psychologist and Duke University Professor Scott Kollins. However, Pediatric Psychologist Dr. Meghan Walls said that the toy could be helpful for students with ADHD or autism. There has been a bit of controversy stirred up by fidget spinners with some schools banning the use of fidget spinners our of fear that they’re becoming a distraction and reports of injuries involving the toy. 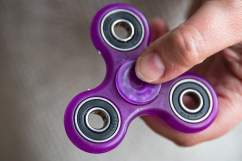