Game Grumps celebrated its fifth anniversary on July 18, 2017. After being on YouTube since 2012, the channel has gained over 4 million subscribers and over 3,400,000,000 views. According to VidStatsX, they are ranked 564 of all the YouTube channels in terms of subscribers. Their Twitter account has over 1.51 million followers, their Facebook page has over 360,000 followers, and their subreddit has nearly 120,000 subscribers.

Five years ago today, the first ever Game Grumps video came out. Thank you, everyone, for five amazing years!!! ?????

Game Grumps Hosts Arin “Egoraptor” Hanson and Dan “Danny Sexbang” Avidan are also starring in the YouTube Red Original Series Good Game, a show about a group of underdogs in an esports competition set to premiere on August 30.

Here’s all you need to know about the rising YouTube channel:

1. The Show Came About From an Argument Between the Hosts

According to part 17 of the channel’s playthrough of Donkey Kong Country 3: Dixie Kong’s Double Trouble, the show came about from an argument between Hanson and Jon “JonTron” Jafari. They were debating whether or not the character Wolf in Super Smash Bros. Brawl was a clone of Fox. Animator Ross O’ Donovan said that they get grumpy at games and Hanson suggested that they should make a podcast based on that. The podcast led to the creation of Game Grumps.

According to the official Game Grumps wiki, the idea for the gameplay channel may go even further back than that. Hanson and animator Chris “Oney” O’Neill, had the idea of a gameplay channel called Mailbag Gaming, where they would play games sent to their PO box from fans. While the format never took off, many of the games that are played on Game Grumps were sent by fans to their PO box as listed in the “about” page on their YouTube channel (PO Box 3770, Glendale, CA 91221). Fans can also suggest games to play on one of the threads on the subreddit.

2. Game Grumps Has Seen Many Hosts and Guests Come and Go

On June 25, 2013, Game Grumps announced that Jafari will be leaving Game Grumps to focus on his own YouTube channel. Avidan, the frontman for popular comedy band Ninja Sex Party, was brought on board to be the co-host of Game Grumps after Jafari left. Donovan also came on board the same day Avidan did as the host of the Game Grumps spin off show Steam Train with Avidan acting as co-host.

Barry Kramer was brought on board the team on September 2012 to help edit the show while Jafari and Hanson worked on their own shows. He’s now a regular guest on many of the channel’s episodes.

Kevin Louis Abernathy was brought on board to take over Kramer’s editing duties in August 2014 after responding to an ad posted by Hanson. Like Kramer, he appeared in videos on the channel. He left in summer 2016 to focus on his interest in trailer editing and was replaced by Matt Watson and Ryan Magee of SuperMega.

Brian “Ninja Brian” Wecht, the keyboardist for Ninja Sex Party, was brought on board as an official member in November 2015 appearing in a variety of the channel’s spin off shows.

The channel has allowed a number of guests on the show starting on March 25, 2013 with the arrival of legendary video game composer Grant Kirkhope. Other guests include Dan Harmon of Rick and Morty, Finn Wolfhard of Stranger Things, and Jacob Anderson of Game of Thrones. 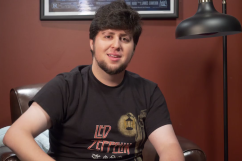 JonTron Is Back With State of Channel & New Video

Dream Daddy: A Dad Dating Simulator, a visual novel game where you play as a single dad trying to date other single dads, was developed and published by the Game Grumps brand.

The game was written and created by Vernon Shaw and Leighton Grey. They and a team of programmers and artists were given funding, promotion, and office space by Game Grumps. Hanson, Avidan, Kramer, Wecht, and Berhow all contributed voice work.

According to SteamSpy, the game has around 189,900 owners.

An eternal optimist (Dan Avidan) and a miserable slacker (Arin Hanson) recruit a team of misfits to take on the eSports establishment by competing for a spot in the biggest KILLCORE tournament of the year — BLOOD MATCH.

The show’s executive producer is Dan Harmon, who created and produced Community and co-created Rick and Morty. The show also has involvement from popular YouTuber and Media Commentator Jessie Cox and eSports Host, Producer, and Actress Michele Morrow.

Since the beginning of the channel, fans have been creating animations recreating episodes of the show. Even Hanson and Kramer contributed their own animations. Animators like Flannelson and Esquirebob were even hired to produce official animations for the channel based on their work.

For the 36th and 37th episodes of the show’s Pokemon FireRed playthrough, footage of the game was lost. So Animator Linzb0t animated the entirety of episode 36 and part of episode 37.

For the 5th anniversary of the channel, Game Grumps released “Animate-A-Grump,” a collaboration between several Game Grumps animators. Each animator recreated a short segment of the show’s finale of their Battle Kid Fortress of Peril playthrough and all of them were compiled into one video. A list of all the animators can be found here.