Jalen is the beloved nephew of the most famous baseball player in the world, Derek Jeter whom serves as a father figure to Jalen.

Jalen was born in 2012, although it is unpublicized when he was born exactly. He is currently 2 years old.

2. His Mother Sharlee is Derek’s Sister

Sharlee is the younger sister of Derek Jeter. The siblings are extremely close to one another and work together to run Jeter’s Turn 2 Foundation established in 1996 to help people shy away from drugs and alcohol. His father works for an organization that prevents drug and alcohol abuse too.

3. His Father isn’t in the Picture

Sharlee Jeter used to date rapper Skyzoo before their split in 2010 when the couple called off their wedding. Despite popular belief, Jalen is not Skyzoo’s son and no sources have information as to who the father is. Sharlee and Skyzoo stopped seeing each other after the split in 2010.

Derek Jeter serves as a father figure to Jalen and is constantly seen playing with his nephew.

4. Jeter Wants a Family of His Own Because of Jalen

Jeter has been asked many questions as to what he will do after he retires at the end of the 2014 baseball season. One of the questions he is commonly asked are his plans ni regards to having a girlfriend, marriage and children. He attributed his desire for a family by relating how much time he misses with Jalen and that he wants the ability to be there for his child.

Jeter said during a press conference a week before the All-Star Game:

“I want to have a family. That’s important to me. I have the utmost respect for all these guys who have kids and families and being away. I have a nephew and you miss so many things and I don’t know how you guys do it. Time is important and there are some things I look forward to doing.”

5. He Lives in New York Close to His Uncle

Sharlee and Jalen stay close to Derek in New York City where Sharlee helps with the Turn 2 Foundation. The siblings have always been very close and Derek gets to spend lots of time with his only nephew. 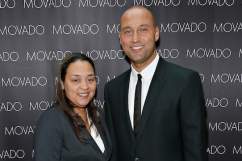 Read More
5 Fast Facts, Baseball, MLB, Sports
Jalen is the beloved nephew of the most famous baseball player in the world- Derek Jeter whom serves as a father figure to Jalen. Here's what you need to know about him.