Raymond Jessel walked on the stage of America’s Got Talent, attached his microphone to his keyboard with a shaky hand, and began a song that started out sweet but had a hilarious hook that made the judges and audience erupt into laughter.

The 84-year-old contestant gave a performance that was anything but ordinary, and his unexpected tune unanimously put him through to the next round.

Here’s what you need to know about the rambunctious old-timer:

1. His Performance Career Began at the Age of 72

In 2002, a 72-year-old Jessel had his first ever performance at Hollywood’s Gardenia Room. The show was a great success, and led to many offers for Jessel to preform elsewhere. He booked shows at jazz clubs and other venues around Los Angeles and in Palm Springs, Toronto and New York.

Despite the fact that his career started so late, Jessel is nowhere near slowing down.

2. He Got His Degree From The University of Wales

Originally from Cardiff, Jessel attended the University of Wales, where he received a music degree. He went on to study composition in Paris, and eventually moved to Canada where he worked as a composer for CBC radio and television.

3. He Wrote a Song called ‘I Think About Sex’

Each of Ray’s songs starts the same– there’s a nice piano intro with simple subject matter, but then the hook is an unexpected hysterical one-liner, typically about sex. In “I Think About Sex,” the verses create a beautiful and peaceful image then immediately stop for the lyrics: ‘I think about sex’.

On his audition for America’s Got Talent, Jessel sang a song about falling in love with a girl who is perfect in many ways but one. It sounds like a sweet, sentimental love song at first, but she has one flaw: a penis.

4. He Wrote for ‘The Sherlock Holmes’ Musical

Early in his composing career, Jessel began collaborating with Marian Grudeff. The duo was admired by Broadway producer Alexander H. Cohen, who hired them to write a song. The song was titled, “A Married Man,” and it was put in Cohen’s ‘Baker Street’ musical.

5. Jessel Had a Career in Hollywood

Jessel has traveled all around the world for his musical career, and eventually he landed in Hollywood. Jessel was pursuing a writing career in television when he found himself in LA, but dabbled in comedy sketches as well. He worked on ‘The Dean Martin Show’ and ‘The Carol Burnett Show’ and eventually wrote a movie titled ‘The Love Boat.’ 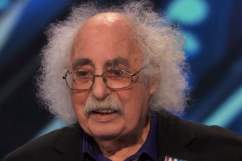 Loading more stories
wpDiscuz
0
0
Would love your thoughts, please comment.x
()
x
| Reply
Ray Jessel cracked everyone up last night with his original naughty song on America's Got Talent. Here's what you need to know about the rambunctious 84-year-old singer.