Tucker and Buckley in a photo taken by the their father, Richard Carlson. (Facebook)

Tucker Carlson’s brother is accused of calling one of New York Mayor Bill De Blasio’s spokespeople a “whiny little self-righteous bitch.” The brother in question is one Buckley Swanson Peck Carlson. He writes for Tucker Carlson’s website, the Daily Caller, on a regular basis.

1. He’s Also Accused of Saying the Spokesperson Never ‘Had a Pearl Necklace’

In a series of emails that were leaked to Buzzfeed. It’s alleged that Buckley Carlson accidentally wrote to Amy Spitalnick, in an email intended for his brother:

Great response. Whiny little self-righteous bitch. “Appalling?”
And with such an ironic name, too… Spitalnick? Ironic because you just know she has extreme dick-fright; no chance has this girl ever had a pearl necklace. Spoogeneck? I don’t think so. More like LabiaFace.

It all began when Spitalnick reached out to Daily Caller reporter Peter Fricke to ask for a correction in a story about Mayor De Blasio’s $80 billion transportation proposal. The Buzzfeed piece shows that Tucker Carlson replied to Spitalnick, complaining about her tone, saying:

Thanks for your email. You believe our story was inaccurate and have demanded a correction. Totally fair. We are going over the transcript now.

What Bedford complained about was your tone, which, I have to agree, was whiny and annoying, and I say that in the spirit of helpful correction rather than as a criticism. Outside of New York City, adults generally write polite, cheerful emails to one another, even when asking for corrections. Something to keep in mind the next time you communicate with people who don’t live on your island.

Buckley Carlson’s email was a response to that message and other emails that Spitalnick had sent asking for a correction. Tucker Carlson later told Politico that his brother “assures me he meant it in the nicest way.” According to her Facebook page, Amy Spitalnick is the Director of Public Affairs in New York’s City Hall.

2. Buckley Carlson Was a Former Communications Director in the Republican Party

According to his New York Times wedding announcement in 1997, Carlson at the time had just left a job as communications director for the Republican Party in Maryland. The posting said that Buckley Carlson was due to marry Melissa Price, it is her second marriage, her first ending in divorce. The posting adds that Carlson graduated from the University of Mississippi.

3. His Father-in-Law Is the Former U.S. Ambassador to the United Kingdom

Melissa Price’s father was Charles Price, the former U.S. Ambassador to Great Britain. He was appointed to the position by Ronald Reagan in 1983 and was famous for his handling of the Lockerbie bombing. Charles Price died in 1983, having served as a director for The New York Times, Texaco and Sprint.

4. Tucker Carlson Named One of His Kids Buckley

In a 2000 People magazine profile, Tucker Carlson discussed his family, he mentions how his only son is named after his brother, Buckley. In the piece he says how his brother is younger and was working as a Washington policy analyst at the time.

According to his LinkedIn page, Buckley Carlson now works for Kelton Research as Managing Director. The company provides “consumer insight for Fortune 500 companies.” His profile also says that when Carlson graduated from the University of Mississippi with a degree in English, he then graduated from the Embry-Riddle Aeronautical University with a qualification in Aeronautical Science. 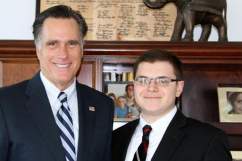