One of New York’s most iconic bars is closing its doors after 23 years. Hogs & Heifers, located in New York City’s swanky West Village will be cease operations on August 23. The bar, known for its rowdy bartenders and raunchy dances, was the inspiration for the bar in the 2000 hit movie Coyote Ugly.

In an interview with the New York Daily News, one of the bar’s owners, Michelle Dell, said “I’m heartbroken. I’ve raised this business by hand for 23 years. At the end of the day, it’s like a losing a child.” She added that since Thor Equities bought their building in 2014, their rent skyrocketed from $14,000 to $60,000 per month. The bar was afforded a short term lease, which expires in August at $30,000. Dell said that in order to make the money needed of the new rent, she would need to charge $17 for a beer.

2. Of the Bras Collected on the Bar, One Belongs to Julia Roberts

According to the bar’s official website, Julia Roberts and Drew Barrymore are among the a-list stars who have contributed their bras to Hog’s decor. Not just that, Paul McCartney once danced on the bar with scantily cad bartenders. Female patrons of Hogs are encouraged to leave their bras behind and to dance on the tables. The New York Times reported in 1997 that the tradition began when a single customer flew her underwear across the bar in a drunken rage.

3. Despite Being the Inspiration for the Dancing Bartenders in ‘Coyote Ugly’, Bartender Dancing Was Banned at the Venue in 1997

In 1997, the bar was closed by, as Hogs’ owners call, the Department of Consumer Affairs, Cabaret Division, reported the Associated Press at the time. The owners, Allen and his wife, Michelle, said that undercover NYPD officers shut the bar down because it didn’t have a cabaret license, necessary for dancing. The Dell’s spent $70,000 to bring Hogs up to code for a new license. Eventually, it was reopened.

In her Daily News interview, Michelle Dell added that the Hogs & Heifers in Las Vegas would remain open. She added that the staff will keep all of the bar’s memorabilia in case a new venue for the New York Hogs emerges. Though she’s not hopeful saying “There is no room for the small, independent business in New York. This is a city that is throwing its history to the curb.”

5. The Bar’s Owner Used to Be Martha Stewart’s Food Editor

On her profile at Hogs & Heifers official website, Michelle Dell says that prior to opening the bar in November 1992, when there were no customers, she worked for Martha Stewart as well as Oprah Winfrey’s magazine. She’s a native New Yorker and met Allen Dell just before he was about to open the bar. She calls it love at first site with him telling her that if Michelle stole from him he would “throw her in the f**king river.” 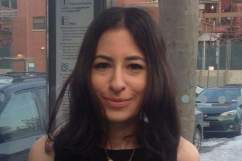 Loading more stories
wpDiscuz
3
0
Would love your thoughts, please comment.x
()
x
| Reply
One of New York's most iconic bars is closing its doors after 23 years.