Tashfeen Malik was killed by police along with her husband Syed Farook after the Inland Regional Center shooting in San Bernardino, California, on December 2. She was 27 years old. Malik was a native of Pakistan. Syed Farook was a U.S. citizen who was born here to Pakistani parents.

The terrorist couple were killed in a hail of police gunfire on a residential street in San Bernardino just a few hours after they opened fire at a Christmas party in the town. The party was being thrown for the county health department, where Syed Farook had been employed. In total, 14 people innocent people were killed at the party with another 21 injured. Cops tracked them to a home in Redlands, some 15 minutes from San Bernardino, and then pursued them in a high-speed chase when they tried to escape. Later, inside that Redlands home, police recovered 12 pipe bombs, with one official referring to it as an “IED factory.”

1. She Pledged Allegiance to ISIS & Its Leader in Facebook Posts Before the Attack

SB police : Syed Farook was at work and attended holiday party & left early. He was employee of SB county pic.twitter.com/NtqE2WuY3w

According to an Associated Press report via Fox News, at “the time of the attack” Malik posted a photo of ISIS leader Abu Bakr al-Baghdadi to a Facebook page she operated under a different name. It was later deleted.

Police said at a press conference on the night of December 2 that they are unsure if Farook and Malik were married or just engaged. However an earlier report from the Los Angeles Times said that Farook had married in the past six months. The Times said Farook had traveled to Saudi Arabia in 2014 and came back to the U.S. with a wife that he had met online.

A California Highway Patrol officer stands with his weapon as authorities pursued the suspects. (Getty)

He and Malik entered the country in July 2014. She was on a K-1 Visa. They were not married when she entered the country. This visa means that the visitor, Malik, had 90 days to marry Farook before being deported. She had a Pakistani passport when she entered the U.S. Authorities say that Farook had visited Pakistan at some point. Malik got her Visa in Islamabad, Pakistan, but traveled to the U.S. from Saudi Arabia. The couple wed on August 16, 2014, in Riverside, California, close to San Bernardino, reports Fox News. In July 2015, she was awarded a green card, meaning she passed Department of Homeland Security checks.

They met for the first time in Saudi Arabia in the September 2013 when both went on the Hajj pilgrimage, reports CNN.

Sources now say that Farook may have become radicalized.

Farook shown in a screengrab via ABC News.

A co-worker of Farook’s told ABC News that the shooter had described Malik as a pharmacist. 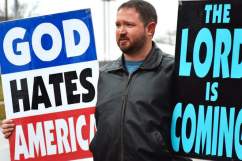 2. They Left Their 6-Month-Old Child With Farook’s Mother to Go & Kill 14 People at a Christmas Party

The couple had a baby who is six months old. That child was in the care of family at the time of the attack and remains there. The Los Angeles Times reports that Malik left her baby with the child’s grandmother on the morning of the shooting. They told the grandmother that the couple had a doctor’s appointment. That same grandmother filed for legal separation from Farook’s father in 2008, citing domestic abuse. Her home became the center of a police search on December 3, reports CBS Los Angeles.

An online baby registry for Malik shows the baby was due on May 17, 2015, in Riverside, California. The New York Post reports that Farook’s co-workers had thrown the couple a baby shower earlier this year, these were the same co-workers he would slaughter on December 2.

Council of American Islamic Relation executive director Hussam Ayloush spoke at a press conference in the aftermath of the shooting. Ayloush said that it was “impossible to track down a specific mosque” that the couple attended. He also attested that Farook’s family thought he was going to be among the victims of the Inland Regional Center shooting.

You can watch the full press conference, featuring comments from Farook’s brother-in-law, above.

3. Her Lawyer Doubts That the 90-Pound Malik Could Have Carried Out an Atrocity

The lawyer who represents their family, David Chelsey, told the media that “there is a lot of disconnects and there is a lot of unknowns and there is a lot things that quite frankly don’t add up or seem implausible.” He said that Malik weight 90 pounds and that she would have been unable to carry assault rifles and tactical gear. Chelsey said “It just doesn’t make sense for these two to act like some kind of Bonnie and Clyde or something.” The attorney said that he spent time with the FBI trying to map out the couple’s motivations but to no avail. “They couldn’t find anything. They were totally stumped. They were totally frustrated…There was nothing to characterize to make them him act in this manner.”

An ABC News report mentioned Farook’s online dating habits. From profile read that he was part of a “religios [sic] but modern family of 4 and that his hobbies included “doing target practice with younger sister and friends.” Another profile said that he was trying “to live as a good Muslim. Looking for a girl who has the same outlook, wear hijab, but live life to the fullest.”

The back of the couple’s home in Redlands, California, the day after the shooting. (Screengrab via KTLA)

He had set up the profile on iMilap, a dating site that describes itself as “a site for people with disabilities and second marriage.” 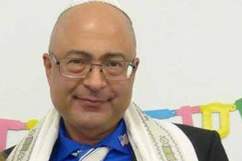 4. All 4 of the Guns That Farook & Malik Had Were Legally Purchased

All of the guns recovered from the car that Farook and Malik were killed in had been bought legally. They were registered to someone who was connected to the shooting, reports CNN. The network also says that that the rifles used in the attack at the center were “AR-15s or similar style weapons.” That report also talked about Farook and Malik being dressed in “assault-style clothing.” The New York Times reports that police recovered assault rifles and “two semiautomatic handguns” from the couple’s car. It was Malik who drove the car on the day of the shooting, reports CNN.

Having moved away from earlier statements, police in San Bernardino now believe that there were only two shooters, not three.

The San Bernardino police chief Jarrod Burguan told the media, “There had to be some sort of planning that went into this.” Burguan continued “I don’t think they just ran home, put on these types of tactical clothes, grabbed guns and came back on a spur of the moment.” The chief spoke regarding the report that Farook had been at a holiday party and gotten into an argument with someone. Only to return a few hours later to open fire.

Burguan later explained that officers had been “working on” what they believed were explosive devices which had been left at the Inland Regional Center.

Two of the guns were purchased by Enrique Marquez, Syed Farook’s childhood friend. The guns were bought three years ago. The FBI raided Marquez’s home, and he has checked into a mental health facility. Read more about Marquez at the link below:

5. Neither Malik or Farook Were Known to Authorities

CNN reports that neither of the suspects were known to local police or to the FBI. As per a press conference on December 4, authorities are investigating the shooting as an act of terror.

Officials said the couple could have been en route to another attack when they were killed.

After initially saying there were no indications of terrorism, the FBI said Wednesday night that they have not ruled out a connection to terrorism. The FBI spokesman would not give specifics.

“I am not willing to go down that road just yet,” said David Bowdich, the head of the FBI’s Los Angeles office, at a press conference. “We will go where the evidence takes us.” 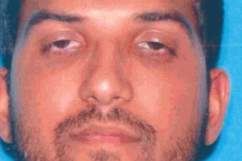