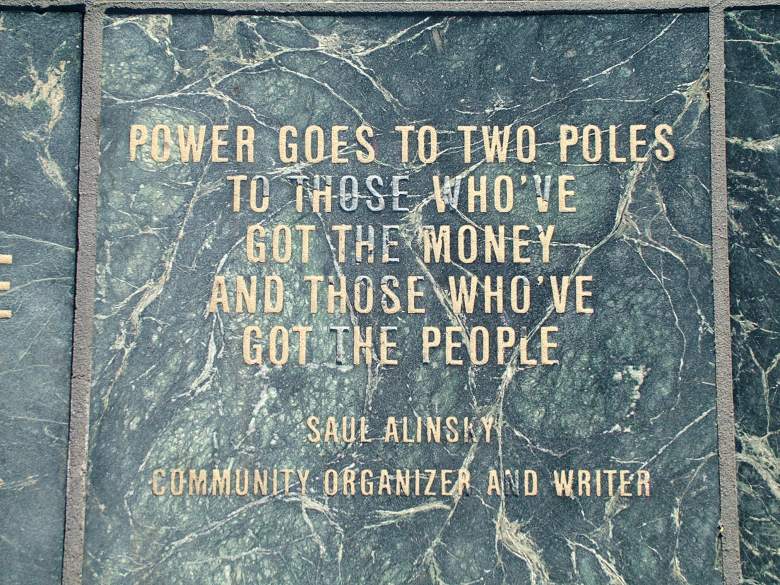 During Ben Carson’s Republican National Convention speech, he referred to Hillary Clinton as being a disciple of Saul Alinsky. He also talked about Alinsky dedicating a book to Lucifer. Who is Alinsky and what does he have to do with Clinton?

Alinsky was born in Chicago in 1909. His parents were poor Russian Jewish immigrants. He majored in archeology at the University of Chicago and was a criminologist. But he is best known as a community organizer and a labor organizer, focusing on groups who faced substandard working conditions and communities.

The Democratic Promise: Saul Alinksy & His Legacy – Part 1Narrated by Alec Baldwin. Directed by Bob Hercules & Bruce Orenstein. Produced by the Corporation for Public Broadcasting. A film about the history of community organizing in America and the role played by Saul Alinsky in the development of the practice. Also featured is the work of the modern IAF organizations as they continue to…2012-09-17T15:58:02.000Z

Saul Alinsky, who died in 1972, is sometimes known as the “father” of community organizing because he discovered that if you can knit a diverse group of people together who were connected by the same grievances, they could become unstoppable. He did this himself, creating a Back of the Yards Neighborhood Council to bring together unions, religious leaders, and other leaders in Chicago in the 1930s. He scaled this up to form an Industrial Areas Foundation that still exists today.

Alinsky’s ideas for community organizing were controversial because he talked about fanning latent hostilities of low-income, inner city residents. He said that searching out hostilities and controversies could organize communities. Instead of setting your own agenda for a group. let them set their own agenda and unleash their own power. He wrote a book about this called “Rules for Radicals” in 1971, that was a bestseller. He wrote:

No politician can sit on a hot issue if you make it hot enough.”

Although some have called Alinsky a socialist, Salon reported that in the 1930s, he had little patience for true socialists and Communists. By the 1960s, he was very harsh on the “New Left” and viewed some activists as naive. He called himself a radical and his favorite founding father was Tom Paine.

2. Alinksy Attributed Lucifer as Being the First True Radical in His Book ‘Rules for Radicals’

Ben Carson at CPAC and LUCIFERIn this video, the great Ben Carson identifies, correctly, Saul Alinsky and his supporters (Hillary named him her major influence) as LUCIFARIANS. That explains A LOT about these Leftists. SATAN is their lord and worship of Satan is what motivates them. In my opinion, I'd like to see every stinking leftist butchered. They deserve it.…2016-03-04T22:44:09.000Z

One reason conservatives don’t like Alinsky is because they say that he dedicated his book, “Rules for Radicals,” to Lucifer. The above speech was given by Ben Carson at CPAC, where he spoke on similar topics to what he spoke about at the RNC.

Although Alinsky’s book was specifically dedicated to his wife, Irene, he did give an acknowledgement to Lucifer as being the first true radical. In the beginning of the book he wrote:

Lest we forget at least an over-the-shoulder acknowledgment to the very first radical: from all our legends, mythology, and history (and who is to know where mythology leaves off and history begins — or which is which), the first radical known to man who rebelled against the establishment and did it so effectively that he at least won his own kingdom — Lucifer.”

Conservatives have often referred to Alinsky’s “Rules for Radicals” as being a “playbook” for the left. In fact, Carson encouraged people to read the book to better understand liberals. He told The Blaze:

The Alinsky-ites say, ‘never have a conversation with your adversary because that humanizes them, and your job is to demonize them.’ In order to solve that problem, we must not allow ourselves to be manipulated. We must go out. We must talk, even to people with whom we disagree…”

3. In 2008, Some Speculated that Michelle Obama Plagiarized Her Speech from Alinsky, But It Was Really Just One Line

After news about Melania Trump possibly plagiarizing Michelle Obama broke yesterday, others thought back to 2008 when people said that Michelle Obama’s DNC speech plagiarized Saul Alinsky. According to Snopes, it was only one line of her speech that resembled a line from his book, “Rules for Radicals.”

Breitbart had reported that part of Michelle Obama’s speech was taken from “Rules for Radicals.” Alinsky’s book read:

“The standards of judgment must be rooted in the whys and wherefores of life as it is lived, the world as it is, not our wished-for fantasy of the world as it should be.”

Snopes concluded the plagiarism claim was weak, as it focused on eight common words from an often-quoted Alinsky phrase.

Barack Obama himself was only loosely tied to Alinsky. In the mid-1980s, he worked for the Developing Communities Project, a group from Chicago’s South Side whose techniques were inspired by Alinsky, Salon reported. Obama also contributed an essay to a collection that were published in Alinsky’s memory in 1988. Obama said he had a tough time being a community organizer, and his path led him to law school and being a law professor and, eventually, to a political career instead.

4. Hillary Clinton Wrote a Letter to Alinsky in 1971

In 1971, Clinton wrote a letter to Alinsky when she was 23 and living in Berkeley. She wrote: “The more I’ve seen of places like Yale Law School and the people who haunt them, the more convinced I am that we have the serious business and joy of much work ahead, — if the commitment to a free and open society is ever going to mean more than eloquence and frustration.”

In her letter she also wrote: “When is that new book [Rules for Radicals] coming out — or has it come and I somehow missed the fulfillment of Revelation? I have just had my one-thousandth conversation about Reveille and need some new material to throw at people.”

She also thanked him for his advice when she was writing her thesis.

5. Hillary Clinton Wrote a Thesis About Community Organizing in 1969 that Talked About Alinsky

In 1969, Clinton met Alinsky for the first time. She was writing a thesis at Wellesley about controversial community organizing ideas, and took much of her information from his “Reveille for Radicals” handbook. The video embedded above is a 1999 documentary that talks about some of Alinsky’s theories on community organizing.

Clinton wrote in her 2004 memoir that Alinsky offered her a job after she graduated, but she turned down the offer because she wanted to go to law school. She wrote: “(He) said I would be wasting my time, but my decision was an expression of my belief that the system could be changed from within.”

Read More
5 Fast Facts, Breaking News, Politics, Republican National Convention
Who is Saul Alinsky? Ben Carson talked about Alinsky, Lucifer, and Clinton during his RNC speech. What was he talking about?