THE FULL VIDEO IS AVAILABLE HERE.

A rapper who performs under the name Kasper Knight posted a video on Facebook on July 22, showing him shooting himself in the face. In the video, Knight points a revolver to his cheek and pulls the trigger.

A person in the car with him is heard asking, “Are you hurt bad?”

“Yes,” Knight responds. “F**k… I don’t give a f**k about nothing any more.” He then says he swallowed the bullet, which went right through his right cheek.

As the video goes on, he holds his hand up to his cheek. He even tells the driver that he doesn’t care if he dies because of the wound.

In the text that accompanied the post, Knight says that he wanted to film himself being shot for a music video and couldn’t get a cameraman to film it. He writes:

Anyway, this was really nothing. I’ve been shot a couple times before and this was like a 4 out of 10 on the pain scale after the initial impact. I look slightly disorientated after the blast. That’s because my ears were ringing/ in pain. It was hard to focus on sound and although I assumed that i swallowed the bullet/ I wasn’t quite sure. The last time that a bullet ricocheted through me/ it destroyed an organ and part of another.

He insists that they aren’t laughing at him being shot in the video, but rather at something outside instead. Knight does admit that he shouldn’t have used a revolver. “Anyway, I should’ve used a different gun. My friend discouraged me from using the .9mm because he said it was armor piercing,” he wrote.

In another video, Knight insists that the previous video was not faked.

Knight, who also performs under the name Kasper the Phantom, also posts artwork on Facebook. He attended New Haven, Indiana High School. Police there told the New York Daily News that they are investigating Knight’s video. 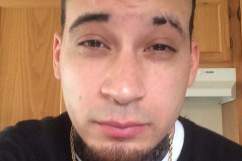 Kasper Knight aka Kasper the Phantom: 5 Fast Facts You Need to Know 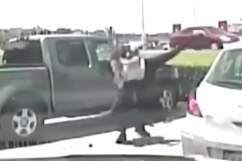 Read More
Facebook, Rapper, Video
Rapper Kasper Knight streamed a graphic video of him shooting himself in the face on Facebook.