An Arab-American Christian was shot dead on his porch by a neighbor who racially harassed the victim’s family for years, police said. Khalid Jabara, 37, was killed on the night of August 12 at his home in Tulsa, Oklahoma. The suspect in the shooting is Stanley Vernon Majors, 61. He’s also accused of hitting Jabara’s mother with his car in 2015. Homicide Sergeant Dave Walker told the media that Majors has had problems with his neighbors for years.

After the shooting, KJRH reports that Majors pointed a gun at a witness before fleeing the scene. He was arrested a short time later hiding behind a tree at a nearby school. While Jabara was rushed to a local hospital, he was pronounced dead there shortly after arriving.

1. Jabara’s Family Say Majors Broke Khalid’s Mother’s Shoulder & Ankle When He Hit Her With His Car in 2015

The scene of the shooting on the night of August 12. (Screengrab via KTUL)

In 2013, Jabara’s mother, Haifa had a protective order issued against Majors, reports Fox Tulsa. The station says she was accusing Majors of sexually and racially harassing her. While Khalid took out a similar order against Majors in January 2015. News on 6 reported in September 2015 that Majors took out protective orders against the Jabara family, accusing them of threatening to blackmail him.

Tulsa World reports that Majors is accused of hitting Haifa Jabara with his car in September 2015.

The statement from the Jabara family says that Haifa Jabara says that she suffered a broken shoulder and ankle as well as head trauma and collapsed lung following the incident. Tulsa World reports that Majors is due to go on trial in March 2017 for that offense. At the time of the Jabara shooting, Majors was forbidden from owning a gun. He is being charged with first-degree murder and firearm possession.

News on 6 reported in September 2015 that when police pulled over Majors after Haifa Jabara was injured, he told them that the victim’s family were “filthy Lebanese.”

2. News of Jabara’s Death Has Led to the Hashtag ‘Justice4Khalid’ Becoming a National Twitter Trend

3 Muslims have been killed in one week in USA and no one call it #TERROR attacks or committed by TERRORISTS. #justice4khalid

As news of Jabara’s death spreads, Twitter and Facebook have become awash with tributes to the 37-year-old. His brother, Rami, wrote on Facebook on August 15, “For those of you who didn’t know my only brother, he was hilarious, quirky, very intelligent, and really would give all of himself for anyone he loved. I miss him. And I know that I’ll miss him more with every day that passes. I love you Khalid.”

While on the night of August 15, the hashtag, “Justice4Khalid” has become a trending topic on Twitter. Here are a few of the most poignant messages that have been posted:

Khalid Jabara – you will never be forgotten. RIP. God Bless You.

Another tragic killing of an Arab in America, this one clearly a hate crime.
Khalid Jabara was shot at point blank range by a neighbor

Khalid Jabara murder is reminder that all Arabs, regardless of beliefs, are in danger of being a victim of a hate crime. #Justice4Khalid

Khalid Jabara was an Arab American killed in Tulsa, reports to authorities of the harassment they faced were to no avail

Jabara graduated from Jenks High School in south Tulsa in 1998. Family friend Rebecca Abou-Chedid told Heavy.com that Jabara lived with his parents and was the primary caretaker for his ailing father. Abou-Chedid also said that Jabara worked with his mother in their sucessful catering company.

3. In 2009, Majors Was Sentenced to Prison for Threatening to ‘Terrorize’ Los Angeles

Majors is no stranger to law enforcement. The Tulsa World reports that in 2009, he was sentenced to 16 months in prison for threatening to “terrorize” Los Angeles. While in March 2015, Majors was also taken into jail for violating Haifa Jabara’s protection order. The World reports that Majors refused to put down a beer he was drinking before he was arrested and then “chugged it.”

4. It’s Not Clear if Majors Will Be Charged With a Hate Crime

Speaking to the media on August 15 Assistant District Attorney John David Luton said it was too early to say if Majors will be charged with a hate crime. While Oklahoma Civil Rights director for the Council on American-Islamic Relations Veronica Laizure, told the Tulsa World, “There were some concerns arising from the perpetrator’s past actions, and there are some questions about how he was able to continue to harass and threaten and intimidate this family, as well as others in the neighborhood.”

5. The Suspect, Who Is Accused of Being a Racist, Married a Man in December 2014

A statement released on August 14 by Jabara’s sister, Victoria, says that in the past Majors had referred to their family as “Dirty Arabs.” While a separate statement, from the Jabara family, says that Majors had issues with their other neighbors, referring to one as a “filthy Mexican” and another using “the ‘n’ word” to describe another. Other epitaphs that family say Majors threw at them were, “filthy Lebanese,” “Aye-rabs,” and “Mooslems.”

Fox Tulsa reports that eight minutes before he was shot dead, Khalid Jabara had called the police to say that he was worried Majors might hurt him. 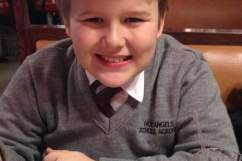 Loading more stories
wpDiscuz
48
0
Would love your thoughts, please comment.x
()
x
| Reply
An Arab-American Christian was shot dead on his porch by a neighbor who racially harassed the victim's family for years, police said.