The story of how Jose Fernandez defected from Cuba is a harrowing one. (Getty)

Jose Fernandez, the Miami Marlins 24-year-old ace right-hander, was found dead early Sunday morning on an overturned boat off of Miami. The horrible discovery put a shocking and heartbreaking end to what until now had been an inspiring success story that began nine years ago, when the teenage Fernandez first attempted to defect from Cuba.

Here’s what you need to know about the dramatic story of his defection.

Ramon Jimenez, Fernandez’ stepfather, said in a 2013 interview that his family had never harbored any desire to defect from Cuba — until the government there singled him out personally. Jimenez, a medical professional, had planned a professional trip to Venezuela. But the regime of President Fidel Castro wouldn’t let him go — ironically because the government was afraid he would defect.

“Until then we had no reason to ever want to leave Cuba, to ever even think about it,” Jimenez told the online magazine Grantland in 2013. “But that was a reminder. When you’re there, it’s like you’re in prison. I had to leave.”

Jimenez planned to make his way to the United States, then arrange from his wife and stepson, Jose, to defect as well. But it took Jimenez 14 attempts to get safely to Florida, where he settled in Tampa.

2. Fernandez Defection Cost His Family About $1,000

Before the recent changes in United States policy toward Cuba, smuggling defectors was an industry unto itself in Cuba. Typical fees ranged from $500 to $10,000. According to an article by ESPN.com, Los Angeles Dodgers star Yasiel Puig may have paid about $1.3 million to a Miami-based smuggler named Raul Pacheco, a staggering sum which includes a percentage of Puig’s salary.

When Fernandez defected in 2008, as a teenager, he was yet to become a star baseball player in his home country. His defection cost approximately $1,000, he told Grantland.

3. During One Attempt He Rescued His Mother From Drowning

Moments after winning the NL Rookie of the Year Award — Jose Fernandez, mother and grandmother. pic.twitter.com/mTnc1Cu1QG

The fourth time that Fernandez and his mother attempted to defect — the attempt that ultimately proved successful — someone on the boat that carried them and several other aspiring defectors fell into the water. In the pitch black night, Fernandez had no idea who had fallen overboard, but his instinct told the 15-year-old that he had to do something.

“Somebody fell out of the boat. I didn’t know who it was,” the pitcher said in a 2014 interview. “So I jumped into the water and I was trying to get to who it was. And when I got close, I saw it was my mom. I was pretty shocked.”

Finally, the boat arrived in Mexico where they hid along with dozens of other defectors for more than a week in a home owned by a smuggler, before making the perilous journey by bus to Texas, where they were welcomed. 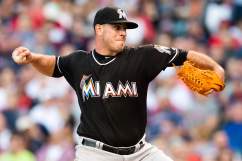 4. He Spent Months In Cuban Prison After One Defection Attempt

After one attempt to defect, Fernandez was arrested by the Cuban government and thrown into prison — where despite his youth he was not separated from the more hardened criminals who were behind bars for good reason. It was terrifying situation where his life was in danger in an even more direct way than during his perilous, nighttime defection attempts.

“I have no idea how I would even describe it in English, but believe me, you don’t want to know,” he told Grantland, describing his ruthless cell-mates. “To them, their lives were already over. What did it matter to them if they killed you? That’s just one more murder.”

How long Fernandez spent in prison is unclear. According to the Grantland story it was “a few months.” But in a Miami Herald story that same year, the young pitcher said he had been in prison for a year.

5. In 2013, He Saw His Beloved Grandmother For The First Time Since Defecting

When I think about Jose Fernandez, I remember how much he loved his mom and grandma. Read this from 2014: https://t.co/l0N8qQIVtz

Fernandez said that the most difficult part of defecting from Cuba was leaving his family behind — especially his beloved grandmother. MLB.com was on the scene with cameras to capture the moment.

“She’s the love of my life, my everything,” Fernandez said about his grandmother, Olga Fernandez. But on November 10, 2013 — just one day before Fernandez would be named National League Rookie of the Year — the Marlins arranged for a surprise visit by the then 68-year-old Olga to see her grandson, after she spent his rookie season climbing to her on rooftop with a cheap radio, so she could pick up the broadcasts of her grandson’s games on a Miami radio station.

The Marlins cancelled their scheduled game against the Atlanta Braves on Sunday, to cope with the tragic loss of Jose Fernandez. 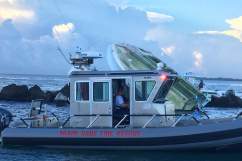 Loading more stories
wpDiscuz
2
0
Would love your thoughts, please comment.x
()
x
| Reply
During Jose Fernandez' defection from Cuba, he once rescued his mother from drowning.