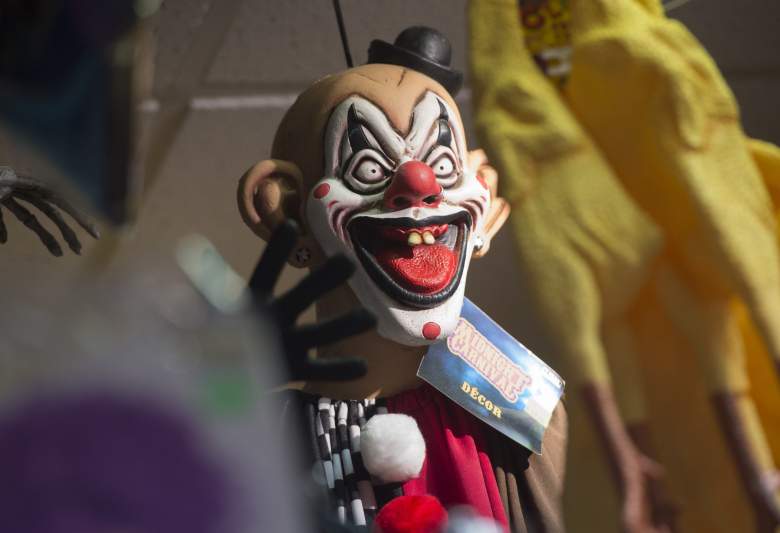 How many clown arrests have happened so far? (Getty)

More than 37 states so far have reported clown sightings, but which ones actually led to arrests? Not every sighting was a hoax, and you can get a better feel for exactly what’s going on by looking at how many people have been arrested. Some clown sightings were just jokes, and some were copycats from earlier news reports. But some led to actual arrests. (To read more about all clown sightings, not just arrests, and see associated videos, please see Heavy’s post here.)

Scroll down to see details on arrests from each state and let us know in the comments about any arrests that aren’t listed here. Here are the people who have been arrested for dressing as clowns or sending threatening clown messages. States are listed in alphabetical order.

At least nine clown-related arrests have been made in Alabama so far, including seven facing felony charges, Nola.com reported. Two adults and five juveniles face felony charges for suspicion of making terrorist threats, AL.com reported. One was a 16-year-old from Pleasant Valley who was suspected of creating a “Billy the Klown” account and threatening a shooting at Saks Middle School.

Two who aren’t facing felony charges include a 17-year-old male in Alexandria facing a child-in-need-of-supervision charge in connection with a social media account called “Koko the Klown.” And in Rainbow City, a 14-year-old faces a misdemeanor harassing communications child after police said they were suspected of making a social media post that hinted Rainbow Middle School would be visited by a clown. The student was from a different school system and wasn’t charged with making a terrorist threat because the school wasn’t shut down.

To be charged with a terrorist threat, AL.com reported, you must intentionally or recklessly terrorize another person, cause a public building or assembly to be evacuated, or disrupt school activities.

In Escambia County, AL.com reported, 22-year-old Makayla Smith of Flomaton was arrested and held on a $200,000 bond because police suspect she used a “Flomo Klown” account that made a terroristic threat against a student at a local school. Two juveniles were also arrested in connection with the case, AL.com reported. After a Facebook post was made, Flomaton High School was put on lock down. The account was also connected to a “Shoota Cllown” social media account.

According to Troy Messenger, two juveniles posted a video under a ClappyAndslappy DaClown Facebook account and said they were coming for Troy, Alabama. They were dressed as clown in the Sept. 18 video, but they weren’t charged. The Pike County District Attorney said it was a misguided prank.

Two teens were arrested in Phoenix on suspicion of robbing a Taco Bell and Domino’s while wearing clown masks, NBC4i reported. Meanwhile, in Mesa, Arizona, two teens were arrested October 4 on suspicion of making threats against schools, ABC 15 reported. They were charged with disorderly conduct and making threats against Mesa Public School district schools.

A man was arrested for driving in Poinsett County in a clown mask and harassing a store clerk, NWA Online reported. A man dressed as a clown, along with his accomplices, were arrested in downtown Bentonville on October 5, 4029 TV reported. Police cited 18-year-old Aaron Lee Scott, with 18-year-old Tyler Austin Pike and Jerry Silva, and released them. Police said the man was “terrorizing people” with a horn near Bentonville Square.

In Marysville, California, police arrested a juvenile on a felony charge, saying they made clown-related threats that involved shooting people at Yuba County schools, KCRA reported. The juvenile made an Instagram post from @mozzytheclown that said, in part, “we’re gonna roll a dice and whatever school it lands on where [sic] gonna shoot up…” Police acted swiftly in response to the post and quickly found the suspect. Marysville Police Department Chief Aaron Easton told ABC 10:

“We want people to take their clown masks off. Before the coroner winds up taking them off of someone just trying to play a joke.”

In Fontana, two teens were arrested in connection with threatening social media clown posts, KTLA reported. A 14-year-old student who called themselves “Fontana Killer Clown” was arrested, police said. And a 19-year-old was also arrested on suspicion of criminal clown threats, the Glendora Police Department said.

In Connecticut, two girls were arrested in connection with a “Jackson the Clown” social media account that made threats against Naugatuck high schools, including Wilbur Cross, Co-Op, James Hillhouse, and Eli Whitney, WTNH reported. The girls were younger than 14 and were charged with conspiracy to commit disorderly conduct.
Two students at Jonathan Law High School in Milford were also arrested after they were caught by police spreading pictures of clowns, WTNH reported.

A 12-year-old boy was arrested in Pasco County on Tuesday, October 4, for making clown threats to Florida schools, Palm Beach Post reported. He faces a second-degree felony charge. Police said he wrote a threat on the video app musical.ly, with the user name @clowing_around. The account posted that it was going to kill students at Seven Springs Middle School on Friday, October 7. The boy admitted to making the threat and said he thought it was funny, police said.

A few arrests have also been made in Georgia connected with clown threats. In mid-September, Georgia police arrested two people from Hogansville for making false calls to 911, claiming they saw clowns in a white van, WSBTV reported.  After their story didn’t check out, police said they admitted to making the story up.

Four people were also arrested on the suspicion that they made clown threats against schools in LaGrange, Georgia, 11 Alive reported. They started a Facebook page threatening to dress like a clown and abduct children from Callaway Elementary, Franklin Forrest Elementary, Callaway Middle School, Troup High School, and Callaway High School. Police said they arrested four people they believed were connected: Steven Goddard Jr.,18, of Manchester, Georgia, Zaria Dallas,18, of LaGrange, Tristian Bonner, 17, of Valley, Alabama, and a 16-year-old.

Police arrested a man in Kentucky who was dressed in a full black-and-white clown costume and mask. According to Kentucky.com, the man arrested was a 20-year-old in Bell County who was walking in a wooded area near apartments at around 2 a.m.

In Roseville, Michigan, two 18-year-old women were arrested after they dressed up as clown and began to chase and scare two 14-year-old girls one night in early October, Detroit Free Press reported. Jaime Salinis and Elandra Sledge were held on disorderly conduct charges in Macomb County Jail on $10,000 cash or surety bonds, police said. The 14-year-olds they scared showed up at the police department hysterical and terrified, and the police said they later tracked down the two women. The charges are misdemeanors, punishable by up to 90 days in jail and/or a $5,000 fine.

There were also a string of bank robberies in Detroit, Michigan, perpetrated by someone wearing a clown mask. WXYZ Detroit reported that police arrested a man, Todd Raymond Keith, who was suspected of committing those crimes while dressed as a clown. He was arrested near the Ohio-Kentucky border after a Delaware County, Ohio robbery.

On October 12, a 15-year-old boy received a citation for posting a threatening clown post on Facebook on October 5. The clown had threatened to kill students at Missoula schools. The Facebook profile was named Zootown Klown.

In Nebraska, clowns were reported in the Lincoln and Grand Island areas. Four teens received citations in Grand Island for making terrorist threats, and one was carrying a BB gun, Lincoln Journal Star reported. The teens were 14, 15, and 16 and were referred to the Hall County attorney’s office.

In New Jersey, a truck full of teens who were wearing clown masks followed a female driver for about 20 miles, taunting her along the way, NorthJersey.com reported. The incident started on Route 23 South in Butler around 1 a.m., and the truck followed the driver and her passenger to Route 287 North, to Route 208 South, to Route 4 East in Paramus. Police stopped the truck and found clown masks inside, a knife, and marijuana. A passenger was charged with possession of a controlled dangerous substance. The driver was issued a traffic summons for reckless driving.

In Toms River, a 12-year-old and 14-year-old girl were arrested for separate clown hoaxes.

In Albuquerque, three juveniles were arrested while they were wearing clown masks outside a children’s clothing store on October 9. They had a handgun with them, Associated Press reported.

A 53-year-old man in New York was arrested for threatening a 16-year-old with a knife on a subway station in Manhattan, NBC New York reported. The man, Thomas Smith, was wearing a multi-color clown outfit when he threatened the boy with a knife, police said. He was charged with one count of menacing and issued a “desk appearance ticket.”

In early September, a North Carolina man was arrested after reporting to police that a clown had knocked on his window at night. He had claimed that he had chased the clown into the nearby woods, police said. David Wayne Armstrong, 24, was arrested for making a false police report, officials said.

In Ohio, there have been eight arrests so far related to clown threats, WHIO reported. During the first weekend of October, Montgomery police charged five students with inciting panic connected to clowns, CBS News reported. And in Fairborn, police arrested a 15-year-old boy for making terroristic threats when he created a clown persona on Facebook and used it to send death threats to students in Fairborn. The charge against the 15-year-old is a felony.

The arrests continued in late December 2016, when a man was pulled over while wearing a red wig and dressed as a clown. He failed a sobriety test. See Heavy’s story about the incident here.

In Portland, Oregon, 55-year-old man David Dahlman was arrested after he wore a clown mask and boxing gloves to Floyd Light Middle School and stood outside school windows, shadow boxing the students, KOIN reported. He charged at the assistant principal, threatening him with violence, and was later arrested, police said. He was charged with second degree menacing disorderly conduct. Earlier in the day, he had walked his grandchildren to a school bus stop while dressed as a clown.

The day before, a 21-year-old was arrested after he wore a clown mask next to a Crater High School sign, while carrying a sign that read “We Are Here.” Police said that he took photos of himself and distributed them at Crater, North Medford, South Medford, and Eagle Point high schools, Oregon Live reported. The Central Point Police Department posted about the arrest on Facebook. He was charged with disorderly conduct and Trespass II, the police department said.

In Rhode Island, a teen was arrested after he made clown-related threats against a school on social media in Pawtucket. He was not identified since he was a juvenile, Providence Journal reported. He faces charges of cyberstalking and cyber harassment.

A man in Amarillo, Texas was arrested for dressing up as a creepy clown and scaring people. Police got calls that someone was outside the Walmart on Coulter Street was dressed as a clown and scaring customers, Amarillo.com reported. Police arrested David Anthony Talbot-Smith, 21, saying that he was following cars and pushing carts at customers, the police said in a press release. He was arrested and barred from all Walmart locations, Amarillo.com reported.

In Manor, an 18-year-old was arrested on October 6 after neighbors reported that a clown was knocking on doors. Police said he had a clown mask with him, KXAN reported. Police thought it was a misunderstanding. Sgt. Craig Stuble said: “He was coming to visit a friend and I don’t believe that he understood the attention and the kind of situation that we’re in…” He was also with a 20-year-old who was arrested for an outstanding warrant for making a terroristic threat, KXAN reported.

In Williston, Vermont, a 15-year-old was arrested after banging on classroom windows while wearing a clown mask.