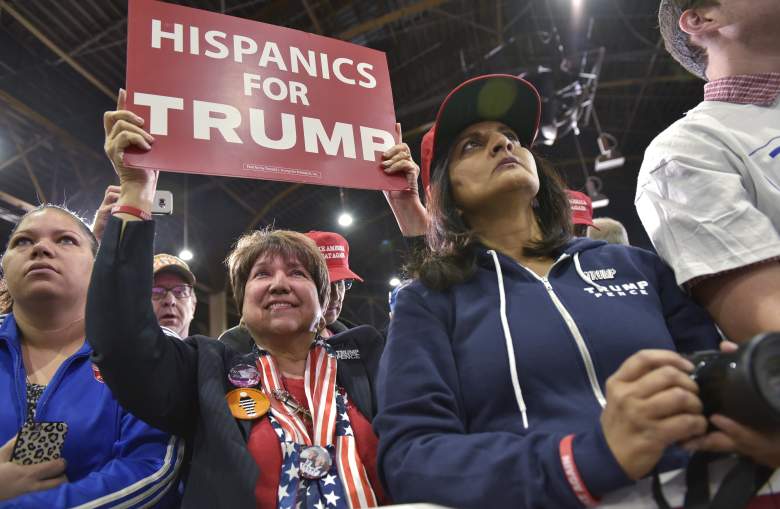 Donald Trump supporters listen to the Republican nominee speak during a rally in Denver, Colorado. (Getty)

Hispanic turnout is way up this year in many key battleground states.

The large number of Latino voters heading to the polls has been particularly noticeable in the state of Nevada, which Donald Trump has been working hard to win and without which a pathway to 270 Electoral College votes becomes much more narrow. Hispanic turnout here is up about 30 percent compared to the 2012 election, Nevada reporter Jon Ralston has found. And when you look at the counties with a particularly high Hispanic population, almost all of them have seen a massive turnout this year.

Take, for instance, Clark County, where the Hispanic population is 30.6 percent. On Friday night, nearly 60,000 people cast their ballot in Clark, which was a record-breaking number of people to vote in a single day in that county, according to ABC News. Jon Ralston estimates that based on the Clark County numbers, Trump is down there by somewhere between 12 and 15 percentage points. That’s a big problem because 60 percent of active voters in the entire state of Nevada live in Clark County. It’s also a problem because Nevada is a state where the majority of voters cast their ballot before Election Day, so it’s unlikely that Trump can overcome this massive Clinton lead on November 8th.

Another battleground state where Hispanic turnout is up is Florida. The two counties in the state with the biggest Latino population are Osceola and Miami-Dade. According to data from the Florida Division of Elections, in Osceola, early voting is up about 42 percent since 2012, and in Miami-Dade, it’s up 46 percent. When compared to 2008, about 260,000 Latino voters had cast their ballot by this point eight years ago, but today, Latino voters have cast 596,000 ballots, according to CNN. This means that across Florida, Hispanic turnout has increased 129 percent since 2008. And 24 percent of Florida’s Hispanic early voters are also voting for the first time this year, according to The New York Times.

Latino turnout is also way up in Arizona, a state that Donald Trump is expected to carry but that Hillary Clinton has been attempting to turn blue. About 12 percent of ballots cast early in that state have come from Hispanic voters; at this point in 2012, this was only about six percent. Arizona as a whole has an extremely high Latino population: 22 percent of the entire state, and 83 percent of Hispanics say they plan to participate in the election.

Finally, Latino turnout is also up in North Carolina, although the spike isn’t as dramatic as in some other states. According to KTLA5, about 38,000 Latinos have voted early in the state thus far, compared to 21,000 four years ago. In total, Latino turnout has increased 75 percent this year.

This is all rather significant because Nevada, Florida, Arizona and North Carolina are all states where just a few hundred votes per county could decide whether the state goes red or blue. Things are particularly close in Florida, and if Hispanic voters are able to tip the state towards Hillary Clinton, they would essentially be denying Donald Trump the presidency.

That’s assuming the majority of Hispanic voters are actually voting for Hillary Clinton, but virtually all polls have shown that the majority of Hispanics prefer her to Trump. In a Wall Street Journal poll released at the end of September, Hillary Clinton was winning 65 percent of the Hispanic population compared to Donald Trump’s 17 percent. And in that same poll, 8 in 10 Hispanic voters said they have a negative opinion of Donald Trump, a far higher ratio than is traditionally seen among voters as a whole.