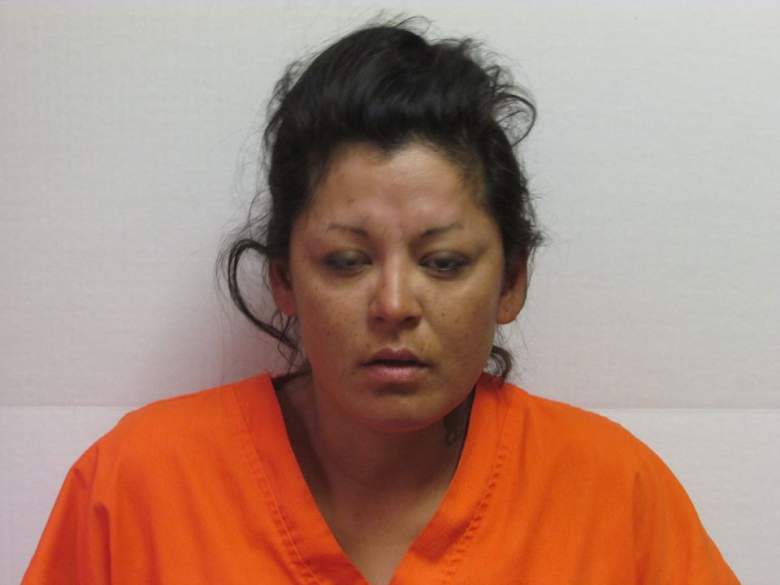 A 37-year-old Denver woman has been charged with trying to murder a law enforcement officer during the Dakota Access Pipeline protests.

Red Fawn Fallis is accused of firing three rounds at officers after they took her to the ground to arrest her on October 27, according to a post from the Morton County Sheriff’s Department.

Tribal Chairman Dave Archambault II has asked the Department of Justice to intervene over what he called “militarized law enforcement,” and to “send overseers immediately to ensure the protection of First Amendment rights and the safety of thousands here at Standing Rock,” says ABC News, adding that the tribal chairman said people were peacefully praying but were “attacked with pepper spray, rubber bullets, sound and concussion cannons.”

Fallis is facing the most severe charges to emanate from the protests. She could face 20 years in prison.

1. Fallis Is Accused of Shooting at Deputies After They ‘Took Her to the Ground’ While She Was Walking Away

The criminal complaint says that deputies were assisting with moving protesters as part of an arrest team and were about to arrest Fallis when she “was being an instigator and acting disorderly.” The deputy observed her “walk away from the crowd of protesters” and approached her and “took her to the ground,” the complaint says, adding that a struggle ensued as the deputies tried to put Fallis in handcuffs.

Fallis allegedly had her hands tucked under her body while she was lying on the ground. One officer was kneeling on the ground near her right shoulder, and two other officers were able to get her left arm behind her back, according to the complaint. Her left arm was tucked under her body. Officers told her to stop resisting, the complaint contends.

A deputy heard two gunshots occur very quickly, and the ground near one of the deputy’s left knees exploded, the complaint said. A deputy placed a handgun in Fallis’ back, and the deputies took a gun out of her hand and handcuffed her, the complaint says.

Fallis did not have the gun in her hand when the deputy first took her to the ground, according to the charging document. One deputy said she “would not let go of the gun” and a deputy was losing a grip on her arm and was afraid that she would “shoot him and then turn and shoot” the other deputy, the complaint said
.
The deputy was not shot but felt Fallis “was trying to shoot him.” She was placed into custody and officers allegedly found a small amount of marijuana and metal knuckles.

Fallis allegedly said during transport that she was “trying to pull the gun out of her pocket and the deputies jumped her and the gun went off.” She allegedly told Probation and Parole that “they are lucky she didn’t shoot ‘all you f—kers.” She then requested an attorney, the complaint says.

The Morton County Sheriff’s Department posted Fallis’ mugshot and news of her arrest on Facebook. The comment thread filled up with more than 1,200 comments in just a short period of time.

Comments included “I stand with Standing Rock! Release her!” and accused the Sheriff’s Department of releasing propaganda and telling lies. One man wrote, “THESE WATER PROTECTORS DON`T HAVE ANY KIND OF WEAPON ON SITE NOW THEY`RE TRYING TO BUILD A CASE UP JUST LIKE THEY DID TO LEONARD PELTIER.”

Not all of the scenes of the protests have been clashes. See above video.

Others on social media criticized Fallis and said her arrest shows the protests are not always peaceful on the Water Protectors’ side. The Sheriff’s Department has written that the mass arrests occurred because protesters would not leave private land; the protesters then lit barricades on fire. Tribal leaders have condemned the militarized police response.

The mass arrests that Fallis was part of were captured in dramatic videos and photos from the scene. The charges against Fallis are attempted murder, preventing arrest, carrying a concealed weapon, possession of marijuana, criminal conspiracy to commit endangering by fire, maintaining a public nuisance and engaging in a riot.

3. Fallis Is From Denver & Law Enforcement Says It Was ‘Our Lucky Day’ That an Officer Was Not Shot

The Billings Gazette says Fallis is from Denver. The pipeline protest has drawn together activists from all over the country and from many Indian nations.

“It is unbelievable that a law enforcement officer was not shot,” said Captain Bryan Niewind of the Sheriff’s Department. “The only angle that gun could have been fired where there was no law enforcement is the angle it was fired. It wasn’t because she was trying to aim away from law enforcement, it was because it was our lucky day.”

According to the Denver Post, Fallis was also arrested twice in September during the protests and “pleaded not guilty to disorderly conduct and criminal trespass.” The newspaper added that protesters are considering a meeting with representatives of the pipeline company, Energy Transfer partners of Texas. The Post said the protesters are divided among “militant younger activists” who want “more aggressive tactics” and elders who want a “peaceful protest centered on prayer.”

There is very little information about Fallis online outside of her arrest. More than 400 people have been arrested since the protests started, mostly for lower level misdemeanors, says Indianz.com.

4. Protesters Claimed They Were Held in Dog Cages & Had Numbers Draw on Their Arms

The Standing Rock protesters say they were held in the equivalent of dog cages and had numbers drawn on their arms during the mass arrest. West Dakota Fox television station said that Cheyenne River Sioux Tribal Chairman Harold Frazier also made the claim in a press conference, saying that protesters were kept in “dog kennels.”

Mekasi Camp-Horinek, who said he was placed in a “mesh enclosure,” said law enforcement wrote a number on his arm, said The Los Angeles Times. Similar accounts also circulated on social media.

Our sisters who got arrested were stripped, marked with numbers, and held in dog kennels. Sound familiar? #NoDAPL pic.twitter.com/xKMFcnsUu1

Sheriff’s officials said they put the arrested protesters in chain link enclosures that were approved as temporary holding centers by the Department of Corrections. The Morton County Sheriff’s Department released a statement to West Dakota Fox news that said, in part, “Temporary holding cells (chain link fences) have been installed into the Morton County Correctional Center and are used for ‘mass arrest’ situations only. They are temporary until the Correctional Center can get them processed into our facility or transferred to another facility in North Dakota. The temporary housing units have been inspected and approved by the ND Department of Corrections…”

In September, demonstrators said that guards pepper sprayed activists and some were injured by their security dogs. Security officers said two guard dogs were injured after knives were pulled on them. (Getty)

The claims come after dramatic images emerged in September of private security guards for the oil company using snarling dogs to square off against protesters. There were claims of injuries on both sides. The late October clash also resulted in claims of injuries.

There have been controversial arrests at the pipeline, such as that of journalist Amy Goodman, who was covering the protests. On October 17, a district judge rejected a “riot” charge against her, said The Nation. She called it a “great vindication of the First Amendment,” the Nation said.

Native Americans march to a burial ground sacred site that was disturbed by bulldozers building the Dakota Access Pipeline (DAPL), near the encampment where hundreds of people have gathered to join the Standing Rock Sioux Tribe’s protest of the oil pipeline that is slated to cross the Missouri River nearby, September 4, 2016 near Cannon Ball, North Dakota. (Getty)

More than 130,000 people showed their support for the Water Protectors on October 31 by checking in at the Standing Rock reservation on Facebook.

This move came after concerns that law enforcement officials were using geotargeting of people’s Facebook check-ins to crack down on protests and disrupt the movement. 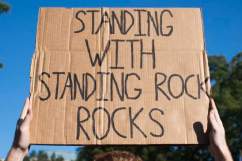 Is the Standing Rock Facebook Check-In Real or Fake?