During a television appearance this morning, former Donald Trump campaign manager Corey Lewandowski said that one of Trump’s signature messages is no longer a priority.

In an interview on Fox & Friends, Lewandowski was asked about Newt Gingrich’s recent comment that “drain the swamp” was just a cute campaign slogan that Trump does not really care about. Lewandowski seemed to agree, saying that this is low on Trump’s list of priorities.

“Look, I think if you had to put them into chronological order, ‘drain the swamp’ is probably somewhere down the bottom,” Lewandowski said of Trump’s priorities. “…I think at the end of the day, it’s about the economy. It’s about creating jobs. It’s about fixing the bad trade deals. So draining the swamp is a larger narrative, but what it’s really about is putting people back to work.”

Corey Lewandowski recently opened up his own lobbying firm called Avenue Strategies, which is located one block away from the White House.

President-Elect Donald Trump promised to “drain the swamp” at every single campaign rally for the final weeks of the election, with this clearly meaning that while in office, he would end corruption in Washington, cracking down in the influence of lobbyists and special interests. The phrase meant a variety of things, but it never had anything to do with the economy or with jobs.

“If we let the Clinton Cartel run this government, history will record that 2017 was the year America lost its independence,” Trump said in October. “We will not let that happen. It is time to drain the swamp in Washington, D.C. That is why I am proposing a package of ethics reforms to make our government honest once again.”

In his first interview after being elected, Donald Trump defended the fact that his transition team was full of lobbyists.

“Everybody’s a lobbyist down there,” Trump said. “We’re doing a lot of things to clean up the system. But everybody that works for government, they then leave government and they become a lobbyist, essentially. I mean, the whole place is one big lobbyist.”

Earlier this week, Trump confidant Newt Gingrch went further than Corey Lewandowski, saying that “drain the swamp” was merely campaign rhetoric and that the Trump team has completely dropped it.

“I’m told he now just disclaims that,” Gingrich told NPR. “He now says it was cute, but he doesn’t want to use it anymore.”

Trump has previously admitted that another campaign slogan, “lock her up,” was just intended to turn out votes and was never something he planned to follow through on. At a recent “thank you” rally, when the crowd began to chant this familiar call to put Hillary Clinton in jail, Trump said, “That plays great before the election…now we don’t care.” 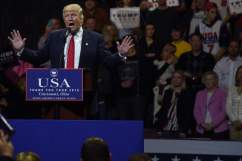