Roberta McCain, the mother of U.S. Senator and former POW John McCain, is still alive at the amazing age of 106. She has now outlived her son, who died on August 25, 2018 of brain cancer at the age of 81.

John McCain’s mom was aware that he was losing his battle with brain cancer. “Roberta is 106, but she’s spunky,” a family friend told People Magazine shortly before John McCain died. “She knows he is ill.”

McCain’s parents married more than 84 years ago. They were married until Admiral McCain’s death in 1981 at age 70. In addition to the Senator, they had two other children, Jean Alexandra McCain, who was married to the late Navy Rear Admiral Henry S. Morgan Jr.; and actor Joseph P. McCain II.

The office of Arizona Senator John McCain announced on July 19, 2017 that the then-80-year-old was diagnosed with a brain tumor when he went in for surgery for a blood clot. In mid December 2017, John McCain returned to Arizona for treatment and rehabilitation and to spend Christmas with his family. McCain survived his battle with brain cancer for more than a year, before dying surrounded by his wife Cindy and family at his Arizona home.

Happy 105th birthday to my wonderful mother Roberta – we love you mom! pic.twitter.com/63E912Imub

When Roberta celebrated her 105th birthday, McCain marked the occasion by sharing a video, seen above. “Happy 105th birthday to my wonderful mother Roberta – we love you mom,” McCain wrote.

Roberta’s granddaughter Meghan added, “Happy 105th Birthday to my incredible Nana (Roberta) McCain! You are an inspiration to me and so many others every day.”

Happy 105th Birthday to my incredible Nana (Roberta) McCain! You are an inspiration to me and so many others every day. pic.twitter.com/lzHKx8MKmo

McCain’s wife Cindy also marked the momentous birthday with a photo on Instagram. 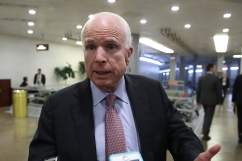 John McCain: How Old Is He & When Does His Term End?

2. Roberta Had an Identical Twin Sister Named Rowena Who Died at Age 99

Roberta also had a twin sister, Rowena Wright Willis. According to her obituary, Rowena died on August 6, 2011 at age 99. “She was remembered by all that met her. She kept her remarkable beauty throughout her life. All that knew her will miss her,” her obituary read.

Rowena was survived by four children, James, Wendy, Melanie and Nelson Willis; 10 grandchildren; and her twin sister. She was married twice.

Although their lives went in two very different directions, Rowena and Roberta remained close. In 2007, when they were 95, The New York Times featured their travels. They visited several countries, including Germany and Israel, without plans, often going on three-month long adventures together. Traveling was part of their lives, as their father became a stay-at-home dad thanks to the wealth he built as an oil businessman. Of course, traveling became an even bigger part of Roberta’s life once she married a man in the Navy.

“He took us somewhere every summer for the month of August,” Roberta told the Times of her father in 2007. “We’d go to a lake in Minnesota, and once he took us to see the source of the Mississippi. It was the littlest trickle you ever saw. He took us to Lake Superior to teach us about the Great Lakes — and feel the coldest water I ever felt in my whole life.” 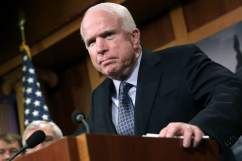 3. Roberta Was 20 When She & Admiral McCain Eloped to Tijuana

GettyAlthough she was in her 90s at the time, Roberta was a constant presence on the 2008 campaign trail when John McCain was the Republican nominee.

When Roberta was 20 years old and still a junior at the University of Southern California, she married John Sidney McCain Jr., who had graduated from the U.S. Naval Academy less than two years prior. He was the son of Admiral John Sidney McCain, who served during World War II and died in 1945.

Admiral McCain Jr. died in 1981 at age 70 after a life in service. He was an important commander during the Vietnam War, serving as Commander-In-Chief, Pacific Command while his son was a Prisoner of War in Hanoi. Both McCain’s father and grandfather are buried at Arlington National Cemetery and had Navy ships named after them.

Admiral McCain and Roberta eloped to Tijuana, notes the New York Times. The young couple traveled the world during Admiral McCain’s service, which explains why McCain was born in U.S. territory in Panama.

Roberta enjoyed traveling so much that she often traveled ahead of her husband. She told the Times that she would go to European cities, beating her husband before he would arrive at the ports. She would try to eat and stay at the cheapest possible hotels. In the years after World War II, she would eat the cheapest foods on the menu in European restaurants, knowing that food was hard to come by.

“My granddaughter asked me once if it was true that you used to be able to travel in Europe on $5 a day,” Roberta told the Times. “I told her, ‘I don’t know; I never spent that much.’ ”

4. McCain Says His Mother Is a Great Influence on His Life & Has an ‘Endless Curiosity’

In his 2005 book, Character Is Destiny, McCain wrote about how important his mother has been in shaping his life. She “remains a great influence in my life,” McCain wrote. He noted that Roberta and her twin sister were “renowned for their beauty,” but it was their personalities that “have always been their most attractive feature.”

My mother was raised to be a strong, determined woman who thoroughly enjoyed life, and always tried to make the most of her opportunities. She was encouraged to accept, graciously and with good humor, the responsibilities and sacrifices her choices have required of her. I am grateful to her for the strengths she taught me by example, even if I have not possessed them as well and as comfortably as she does.

In the book, McCain also praised his mother’s “endless curiosity about the world, about natural history and, even more so, human history.”

“The joy of her life is learning about people and places, and coming to know them as well as she can; she never loses the desire to know them better,” McCain wrote of his mother. “She has a remarkable capacity for delight. Life, all its adventures and many interests, thrills her as much in her late years as it did in her childhood.” 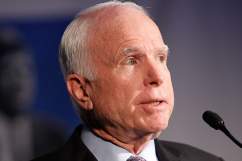 5. She Suffered a Mild Stroke Before Her 100th Birthday

GettyJohn McCain and his mother Roberta on Meet the Press in 2007.

Before she turned 100, Roberta suffered a mild stroke that impacted her left side, The Washington Post reports. However, McCain told the Post that she still wanted to move to Turkey. He successfully talked her out of that.

“We still, to this day, have spirited discussions about politics and policy,” McCain told the Post in 2012. “In some ways, I’m not conservative enough for her.”

More recently in 2013, Greta Van Susteren wrote a Politico essay about how she became close friends with Roberta, writing that she was visiting Roberta once a week for coffee at Roberta’s Washington, D.C. apartment.

“She is my best friend. She says I am her best friend but I suspect she is just being polite. She has said to me many times as I leave, ‘Imagine meeting your best friend at my age. All these years … and it isn’t until now,'” Van Susteren wrote in 2013. “I know this fascinating woman has lots of best friends, but I like my myth that I am the only one. I am sticking with it.”