The photo that "Nicole Mincey" used as her Twitter profile picture.

President Donald Trump opened a can of worms when he retweeted a now-suspended Twitter account using the name of “Nicole Mincey” and wrote, “thank you, Nicole!” A person using that persona – accused of being a “bot” on Twitter – has appeared on the radio, and you can listen to the audio later in this story.

However, the real college student linked online to the “Nicole Mincey” persona (but whose name is different) now alleges her Facebook account was hacked and her identity used to sell Trump merchandise. Heavy originally chose not to use her name in this article, but she has also talked to the Daily Beast and allowed them to print her middle and last name, Nicole Mincy (without the ‘e.’) Heavy is also choosing not to reveal her real first name to preserve some measure of the 21-year-old woman’s anonymity.

Before Trump retweeted the Twitter account, the “Nicole Mincey” name had been used in online columns and radio appearances to tout a website called ProTrump45 that sells pro-Trump merchandise online – Trump shirts, hats, and the like.

A Twitter firestorm quickly ensued after Trump’s tweet of people insisting that “Nicole Mincey” was actually a bot and was not a real person, fueled in part by the fact that the Twitter site that originally used the name “Nicole Mincey” used a faked profile picture that is of a model. The original Twitter site that Trump retweeted has now been suspended (after it switched to the name Alexandria and another model’s photo as the controversy grew).

Heavy set out to unravel the mystery of “Nicole Mincey” and was able to trace the “Nicole Mincey” persona to a real college student in New Jersey who has a different, albeit similar, name and a social media presence of her own that includes many family and school-related photos. That 21-year-old college student from Newark first asked Heavy to remove her “real name” from a story on the controversy and then alleged her Facebook account was hacked and her identity stolen and used to create the Nicole Mincey persona by some unknown party (her photos do not match that of the model). She also claimed that she has never sold Trump merchandise; among other online links, her name and the name of Nicole Mincey appeared together in the profile description of a GoFundMe site established through the college student’s Facebook page to raise money for “Young Black Republican” causes, and the college student’s real name appeared on a Trump store contact page tied to the ProTrump45 brand. Furthermore, a press release for the GoTrump45 merchandise site lists “Nicole Mincey” as the media contact person and also lists the address of the real college student’s university mailroom in Jersey City, New Jersey.

To the Daily Beast, she alleged that she was recruited by a group of people led by two people named Lorraine and William, whose identities are unclear, to write blogs for the ProTrump45 store. She alleged that they then took her name, changed it slightly, and used it on the ProTrump45 Twitter page and other platforms. She told Daily Beast she was recruited by the group because she was already writing pro-Trump memes on the Web, but says she dropped out of it and was angry they kept using her slightly altered name. She claimed they were also using the university address.

Furthermore, a person using the name “Nicole Mincey” and claiming to be the “ProTrump45” Trump merchandise entrepreneur was touted as appearing on a New York radio show in June and previously gave an interview to a conservative website. Heavy has written the New York radio station in an attempt to obtain the audio from that appearance.

Heavy also has unearthed audio of a person using the name “Nicole Mincey” of ProTrump45 speaking on a Trending Today USA radio show in May 2017. You can listen to the audio below. She appears at the beginning of the program and discusses why she supports Trump. Nicole Mincy, the real college student, told Daily Beast that another woman posed as Nicole Mincey for that interview.

Hosted by Ernie Brown, the show description online reads, “In this half hour, the guests and topics discussed were: 1. Nicole Mincey (Pro Trump 45) — Millennials and African-Americans are both characterized by the mainstream media as being anti-Trump.”

In the Trending USA interview, “Nicole Mincey” was positioned as a voice for black millennials. “I used to be a liberal and I used to be a Democrat and I used to be an Obama supporter, but things have changed. I realize the facts, and not emotions. I let facts determine decide who I vote for now,” she said on the radio show.

She claimed that people were “brainwashed by the liberal media because most of it is fake anyway and most of it is biased and outright lying sometimes.”

The woman using the name Nicole Mincey claimed she looked up the “facts” about the Barack Obama administration and she claimed that black income and home ownership did not fare well under Obama. “I realized the Democrats just get out vote and they don’t do anything to keep it,” she said on the radio show.

Of Trump she said, “I am pretty sure he is going to be the kind of president who actually do something to keep out vote.”

She added, “I’m sick of things the way they are… I’m tired of politicians not following on their word.” She called Trump a “successful businessman” and called the other candidates “plain establishment, and they just go along with the flow.” She said she felt eventually they would “sell out.”

She said that Trump could have kept his lifestyle but chose to run for president instead. “He’s anti-establishment,” she said of Trump. “…he’s not just going to do what the media says.” She added, “He’s trying to get lobbyists out.”

“Nicole Mincey” was also quoted in an article on the WND conservative website. Her Twitter page was full of pro Trump memes and comments.

You can read more about the “Nicole Mincey” controversy here: 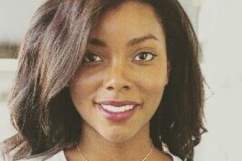 Loading more stories
wpDiscuz
1
0
Would love your thoughts, please comment.x
()
x
| Reply
Donald Trump retweeted a page in the name of "Nicole Mincey" and many allege she's a fake bot. A person using the persona appeared on the radio in May. Listen to the audio.