Now that Hurricane Irma has come and gone through many parts of Florida, officials from Pinellas County are surveying the damage the deadly storm left in its path.

Irma first made landfall in the United States in southern Florida on Sunday morning, causing intense flooding and extensive damage to structures in the Florida Keys. As the storm worked its way up Florida’s spine, it continued weaken in strength and became a tropical storm by Monday morning as it rolled through northern Florida. Irma doused the Pinellas County area with rainfall and tore through cities with winds strong touching around 85 mph.

According to ABC News, the storm left five dead and almost 6 million Floridians without electricity as a result.

While much of the stronger winds and damage occurred in southern Florida, many parts of Pinellas County and Clearwater Beach felt much of the effects.

Fox 13 News reported that one of the worst reports of damage in Clearwater came at a senior living apartment complex called the Drew Ridge Apartments at 1221 Drew Street. During Irma, one of the apartment unit’s roof was blown off, and it landed on multiple cars.

The Clearwater Fire Department went out into the community Monday morning to assess the damage, and it tweeted many of its findings. See some of the photos and videos of the damage in Clearwater from the fire department below:

Some significant damage at a strip mall at corner of NE Coachman and N. Belcher Rd. #Irma pic.twitter.com/pUZnXL9XzE

A roof of one mobile home in Parkwood Estates ripped off and blown into a nearby tree. #Irma pic.twitter.com/P7UPJulLip

A tree through the roof at a home in the Sunny Grove Mobile Home Park. Owner not home. #Irma pic.twitter.com/VJnI2AaKIx

Some minor roof and tree damage at the Island in the Sun Mobile Home Park. Clearwater Fire on scene. #Irma pic.twitter.com/omnn2P1SNX

Damage at Vine and Palmetto from #Irma. pic.twitter.com/fLrnavEnR3

Multiple areas in Pinellas County were ordered to evacuate prior to Irma making landfall, and access to the county was cut off Sunday morning. The mandatory evacuation orders affected over 160,000 residents in the county. The evacuation orders came as meteorologists tried to track the path of Irma and after Florida Gov. Rick Scott declared a state of emergency for all of Florida. Scott put the declaration into order to give officials appropriate time to prepare for the storm, and it appeared to work.

As of 9:30 a.m. Monday morning, access has been restored to Pinellas County, except the barrier islands remain closed.

Here are some more photos and videos of the storm itself, as well as some of the damage from Irma in Pinellas County:

Sorry it is so dark, but this is Clearwater right now. The winds are very strong, but things are OK right now. #Irma pic.twitter.com/5UPKmLaCix

Irma is starting to hit us here in Clearwater FL. The next several hours are going to be interesting. pic.twitter.com/iqEUlMn6IX

Wow. Check out this gas station that was badly damaged in Clearwater on Drew and Cleveland #Irma @abcactionnews pic.twitter.com/zfD2sDptGc

.@Ryanyoungnews holds on to rope tied to a cement post as violent winds from Hurricane Irma hit Clearwater, Florida https://t.co/FE8cAl3AqN

Post hurricane #Irma in my neighborhood in #Clearwater https://t.co/qLtLUoIELo 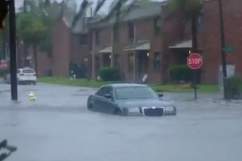