When Kimberley Conrad got Hugh Hefner to the altar in 1989, it shocked a lot of people. The inveterate playboy hadn’t been married for 30 years, and he was better known for having a posse of playmates at his beck and call.

Conrad and Hefner – who died at age 91 of natural causes on September 27 – made the union last for awhile, and it produced children, but it inevitably fell apart.

1. Kimberley Conrad Was a Playmate of the Year at Playboy & Was Born in Alabama

Conrad was the 1989 Playmate of the Year for Playboy.

According to IMDB, “Strikingly tall (5′ 9″), slim, and drop-dead gorgeous blonde knockout Kimberley Conrad was born Kimberley Coonradt on August 6, 1962 in Moulton, Alabama. Kimberley’s family moved to Reno, Nevada when she was four and moved a second time to British Columbia, Canada when she was twelve.”

The site reported that “Conrad began modeling at age seventeen: She modeled for John Casablancas Elite as a teenager and worked in the fashion industry in Vancouver, Canada. Local Vancouver photographer Ken Honey talked Kimberley into posing for Playboy.”

She soon caught the eye of the magazine’s legendary – and much older – founder, Hugh Hefner.

2. Conrad & Hefner Had Two Sons Together

GettyIn 1997, Hugh Hefner and Kimberley Conrad at the premiere of the New Star Wars.

Conrad and Hefner had sons Cooper and Marston together. Cooper was quoted in a Playboy news release on his father’s death.

“My father lived an exceptional and impactful life as a media and cultural pioneer and a leading voice behind some of the most significant social and cultural movements of our time in advocating free speech, civil rights and sexual freedom. He defined a lifestyle and ethos that lie at the heart of the Playboy brand, one of the most recognizable and enduring in history. He will be greatly missed by many, including his wife Crystal, my sister Christie and my brothers David and Marston and all of us at Playboy Enterprises,” Cooper Hefner, now Chief Creative Officer of Playboy Enterprises, said in a press release from Playboy after Hefner’s death.

According to IMDB, “Kimberley married Playboy founder/publisher Hugh Hefner on July 1, 1989; the couple had two sons before separating in 1999.”

The marriage sparked a number of mythologies.

In a recent interview, according to Fox News, Conrad said it was not true that she tried to stop partying at the Playboy Mansion after she married Hefner.

“There was a common misconception that I put the whole kibosh on the partying at the Mansion,” she said, according to Fox. “It had nothing to do with me. The Playmates still came over, but it was nice to have them call and say, ‘Hi! I’m coming up!’ Let the office know. It was still wide open. It was still the ultimate restaurant and health club with a 24-hour membership. We never refused anyone, ever. But it’s nice to know that there’s going to be people in your house when you’re coming downstairs in the morning. It was always an open door and open gate.”

3. Conrad & Hefner Separated Years Before They Divorced & Lived Next Door to Each Other

At first, the separation was so civil that Hefner and his second wife continued living next door to one another, but it eventually descended into a degree of acrimony over money. Still, Hefner and Kimberley remained technically married for many years after they first separated.

According to The Hollywood Reporter, “The couple had two children before separating in 1998, at which point Conrad and the two boys moved out of the Playboy mansion and into a house next door. It wasn’t until 20 years later that Hefner and Conrad officially divorced.”

After divorcing Hefner, Conrad became active for PETA and other animal rescue groups in Los Angeles, and she is known for her love of snowboarding and her vegetarianism, according to IMDB. “Conrad’s sole foray into acting was a guest appearance on an episode of TV series ‘Highway to Heaven,'” the site reported.

In a 2009 story on the couple’s divorce, The New York Daily News reported that Hugh Hefner filed the action and asked to reduce the support he was paying Conrad from $40,000 a month to $20,000.

“The Playboy founder filed for divorce on Friday from his wife and former Playmate, Kimberly. Hefner is asking a judge to order him to pay Kimberly Conrad Hefner $20,000 a month in spousal support. That would be half of the $40,000 a month that the Playboy founder has been paying her since they separated in 1998,” the newspaper reported.

However, the split was not always amicable. According to The Daily News, in 2009, “she sued Hefner last month, claiming he owes her $4 million under their prenuptial agreement and for proceeds from the sale of the home she is living in. Her lawsuit states Hefner agreed to pay her $250,000 per year for every year they were married after their fourth anniversary.”

4. Cooper Hefner Assumed Editorial Control of Playboy & Asked His Mother to Pose for the Cover Again

According to the Hollywood Reporter, Cooper, the son of Conrad and Hefner “has assumed creative control at the brand his father launched 64 years ago as he brings nude images back to the magazine while lamenting the company’s involvement in lowbrow licensing and reality TV.”

The trade magazine quoted him as saying, “Nudity hadn’t been the problem — it was how it’d been presented.”

5. Hefner Was Married Two Other Times

Hugh Hefner’s first marriage came in 1949 to his first wife, Mildred Williams, known as Millie. The union produced two children – Christie and David – but it dissolved in 1959 and was rocked by Mildred’s infidelity, according to The Hollywood Reporter. Hefner married a third and final time, in 2012, to Crystal Harris.

You can read about Hefner’s last wife, Crystal Harris, here: 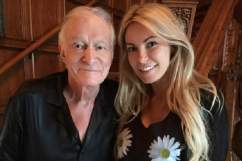