A second woman has come out with allegations of sexual misconduct against former President George H.W. Bush.

Jordana Grolnick, a New York actress originally from Colorado, has accused the 93-year-old former president of telling her a sexually-suggestive joke before squeezing her buttocks while they took a photograph together. Grolnick told her story of the alleged misconduct to Deadspin, saying the incident took place last year while she was part of a production in Maine.

Grolnick has been a professional theatre actress since she graduated from the University of Michigan in 2015. Shortly after, she landed her breakthrough role in a Tony Award-winning production.

Here’s what you need to know about Grolnick:

1. Grolnick Accused Bush of Making a Joke While Grabbing Her Butt

Grolnick told Deadspin that she was working at a production of Hunchback of Notre Dame in August 2016 in Maine when Bush put his hands on her. She said that Bush, who stays in nearby Kennebunkport during the summers and is a frequent visitor to the theater, was in attendance for a performance of the play.

During an intermission, Grolnick said Bush came backstage with his wife, former First Lady Barbara, and spoke to the cast. At one point, she and her colleagues gathered around for a photo with him. As the group made a half-circle around his wheelchair to pose for the photo, Grolnick said she was directly next to Bush, who “reached his right hand around to my behind.”

Grolnick said that as the group smiled for the photo, Bush asked them: “Do you want to know who my favorite magician is?”

Suddenly, Grolnick said Bush’s hand “dug into (her) flesh” as he said the answer to his “joke:” “David Cop-a-Feel!” Grolnick said the “joke” was met with laughter by others in the room, and Barbara responded by sarcastically saying, “He’s going to get himself put into jail.”

Grolnick said that she told her friends and family of the incident, adding that “nobody didn’t believe me.” However, because he was the former president of the United States, she said she was reluctant to come forward and tell her story. It was the recent outpouring of sexual misconduct allegations in entertainment and media that allowed her to speak out and share her story, she said.

“Now that the #metoo movement has brought this all to light, I think I should have been a little more alarmed to be touched so inappropriately by a man who was once the leader of the free world,” Grolnick told the news outlet. “He knows the power he has, and the reverence he deserves, even while sitting perhaps somewhat senile in a wheelchair.”

Prior to the Deadspin story, Bush’s office released a statement apologizing for any actions deemed inappropriate by those he’s had interactions with.

The statement, issued by a spokesman October 25, acknowledged that Bush often touches the lower waist of people because he’s confined to a wheelchair. In addition, it stated that “to try to put people at ease, the president routinely tells the same joke — and on occasion, he has patted women’s rears in what he intended to be a good-natured manner.”

2. Grolnick Is From Colorado & Was in Many High School Productions

According to her Facebook profile, Grolnick is originally from Boulder, Colorado and attended Silver Creek High School in Longmont. She was very active in extracurricular activities during high school and performed in many theatre productions and was a star in choir.

In December 2009, she was named a “Student of the Month” by the Twin Peaks Rotary Club, according to the Longmont Times-Call.

In 2009, she was a member of the All-State Women’s Choir under the direction of Leslie Guelker-Cone. She was also an alto on Silver Creek’s Chamber Choir.

Grolnick also acted in a small 2014 short film titled Bad Girls. According to the description on IMDb, the film is a “coming of age drama about two high school girls in a dangerously unhealthy friendship.”

After graduating from Silver Creek in 2010, she moved to Ann Arbor, Michigan and attended the University of Michigan. In 2015, she graduated from the school and obtained her bachelor’s degree in musical theatre. 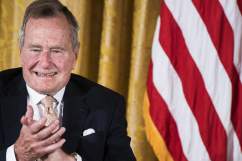 President George H.W. Bush’s ‘Joke’: What Did He Often Say to Women?

3. She Landed the Role of Cinderella on a Tony Award Winning Production

So far, Grolnick’s biggest break in the industry came just months after she graduated from Michigan. She moved to New York City to pursue a career, found an agent and auditioned for various roles in productions. Among her first auditions was one for the Tony Award-winning musical Rodgers and Hammerstein’s Cinderella.

According to the Times-Call, she was back home in Colorado when received a call from the creative people behind the musical, and they told her they wanted to see more.

“When I got back to the city a couple of days later, I went to sing for them,” she told the newspaper. “That was on a Friday and I got the call on a Monday. It was crazy and fast. It worked out. I didn’t have an apartment or furniture. I figured it was a good time to go on the road.”

Today we celebrate our remarkable swings that can be the unsung heroes of our show. Happy National Swing Day! pic.twitter.com/PLYJZEvhud

Grolnick credited acting classes she took at the Denver Center for the Performing Arts for transforming her career.

“I certainly wouldn’t have gotten this job if it hadn’t been for those classes,” she said. “There have always been people who have been very supportive and excited about musical theater. It was paramount in teaching me about the realities and business of theater, and that was an equal lesson to learning to point my toes and sing.”

Grolnick toured across the country with the production and has landed other big gigs since then. Most recently, according to her profile on BroadwayWorld.com, she’s been on the cast of Chasing Rainbows: The Road to Oz, On the Town and A Chorus Line.

4. Grolnick Has Been Outspoken Against President Donald Trump & Other Causes on Social Media

Grolnick’s Facebook profile shows that she’s active in yoga and supports various nonprofits and causes, such as the Women’s March. She also “liked” Hillary Clinton on Facebook as well as dozens of production companies from across the nation.

Grolnick is also active on Twitter, where she isn’t shy about her political beliefs. Several re-tweets and tweets on her profile are critical of Trump and his administration.

She’s also been outspoken about gun violence and women’s rights, often encouraging lawmakers in tweets to pass legislation to curb the issues.

You know gun control is a real issue when the local radio station has to edit out "fire a gun." Instead, let's edit out GUNS completely!!

Every day, 88 Americans are killed by gun violence. @SenBennetCo, we demand you pass common-sense gun laws.

Walking today, a man told me to stay pretty. I told him I'd also stay intelligent, strong, and driven. #prettyand #tryagain #theresmore

5. Grolnick’s Allegations Against Bush Came Days After Another Actress Came Forward With a Similar Story

Grolnick’s allegations against Bush came just one day after Hollywood and Broadway actress Heather Lind also accused him of sexual assault in an incident that was virtually identical. She said that he touched her inappropriately from his wheelchair while he told her the suggestive joke in front of his wife, Barbara. Lind wrote in an Instagram post that the alleged incident occurred four years ago.

In the lengthy post, which she posted on October 24 and has since been deleted, Lind alleged that Barbara was present and rolled her eyes after the former president groped her. Lind shared a photo of Bush in his wheelchair shaking hands with former President Barack Obama during a gathering of ex-presidents designed to help with hurricane disaster relief. She wrote that she does not respect Bush Sr., and she felt compelled to speak out after running across the photo of him and Obama.

Here is her post, which she took down after it went viral, in full:

I was disturbed today by a photo I saw of President Barack Obama shaking hands with George H. W. Bush in a gathering of ex-presidents organizing aid to states and territories damaged by recent hurricanes. I found it disturbing because I recognize the respect ex-presidents are given for having served. And I feel pride and reverence toward many of the men in the photo. But when I got the chance to meet George H. W. Bush four years ago to promote a historical television show I was working on, he sexually assaulted me while I was posing for a similar photo. He didn’t shake my hand. He touched me from behind from his wheelchair with his wife Barbara Bush by his side. He told me a dirty joke. And then, all the while being photographed, touched me again. Barbara rolled her eyes as if to say “not again”. His security guard told me I shouldn’t have stood next to him for the photo. We were instructed to call him Mr. President. It seems to me a President’s power is in his or her capacity to enact positive change, actually help people, and serve as a symbol of our democracy. He relinquished that power when he used it against me and, judging from the comments of those around him, countless other women before me. What comforts me is that I too can use my power, which isn’t so different from a President really. I can enact positive change. I can actually help people. I can be a symbol of my democracy. I can refuse to call him President, and call out other abuses of power when I see them. I can vote for a President, in part, by the nature of his or her character, knowing that his or her political decisions must necessarily stem from that character. My fellow cast-mates and producers helped me that day and continue to support me. I am grateful for the bravery of other women who have spoken up and written about their experiences. And I thank President Barack Obama for the gesture of respect he made toward George H. W. Bush for the sake of our country, but I do not respect him.
#metoo

Learn more about Lind and her allegations by clicking below: 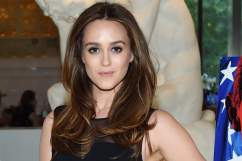